At the conclusion of President Donald Trump's State of the Union address, House Speaker Nancy Pelosi made her feelings known about what she had just heard.

She stood and ripped up a copy of the speech.

As Pelosi left the House floor, she was asked what she thought of the speech. She said, “I tore it up,” NBC News reported.

When asked why she tore it up, she said: "because it was the courteous thing to do considering the alternative."

A short time later, the White House responded on Twitter, listing some of the issues and people embodied in the speech.

Republicans dismissed her display, on the eve of Trump's acquittal in the Senate impeachment trial, as a tantrum.

"She might as well rip up any plans for attracting independent voters," said Trump campaign spokesman Tim Murtaugh. "Pelosi and the Democrats sat on their hands through all of the good news for Americans in that speech."

South Carolina Sen. Lindsey Graham tweeted: "Tearing the speech up is not going to tear up the accomplishments of this President."

“This speech was about American heroes and American workers. She decided THAT was worth literally tearing apart,” tweeted Steve Scalise of Louisiana, the Republican vote-counter.

Tearing the speech gave Pelosi the last visual word over Trump, who had spoken to the House from a position of strength. He arrived in the chamber with the full force of the Republican Party behind him. She is leading a party in the throes of a divisive presidential nomination fight that had botched the kickoff Iowa caucuses only the night before. The House had impeached Trump on her watch. But the Senate was poised to acquit him.

From the start, the event was awkward because the history between those two was so icy. They had not spoken since October, when Pelosi pointed at Trump over a White House conference table, suggested that Russia controls him and walked out.

Now, Trump was returning to the very chamber where he was impeached, standing before the same Democrats who have called him unfit for office and sought to oust him. He stepped to the podium and handed navy blue folders containing his speech to Pelosi and Vice President Mike Pence. Photos from that moment show that Trump mistakenly handed Pence's copy to Pelosi. The outside reads in gold letters: “The President of the Senate of the United States.” That's Pence's title.

At that moment, Pelosi extended a hand. Trump did not acknowledge it, instead turning around to begin his speech.

Pelosi, famous for casting shade, especially on Trump, gave a look. After Trump finished his speech, Pelosi tweeted: "Democrats will never stop extending the hand of friendship to get the job done #ForThePeople."

For 78 minutes, Trump went on to extol a "Great American Comeback" on his watch, just three years after he took office decrying a land of “American carnage” under his predecessor. Pelosi read through her copy as he spoke.

Some House Democrats, including Rep. Alexandria Ocasio-Cortez of New York, chose not to attend the event at all.

"After much deliberation, I have decided that I will not use my presence at a state ceremony to normalize Trump’s lawless conduct & subversion of the Constitution," Ocasio-Cortez tweeted. "None of this is normal, and I will not legitimize it."

Other Democratic lawmakers did attend but stood and left as Trump spoke, tweeting their principles on their way out.

"I left the #SOTU after Trump -- a draft dodger who has mocked Sen. John McCain, Gold Star families, and soldiers with traumatic brain injury -- started talking about the good he has done for our military," Rep. Seth Moulton of Massachusetts tweeted.

Sen. Cory Booker of New Jersey walked out of the speech, later tweeting the address was "more of the toxic division that we've become accustomed to."

When President Donald Trump climbed to the rostrum, he did not take House Speaker Nancy Pelosi's outstretched hand, though it was not clear he had seen her gesture.

There were several other divisive moments in the president's address Tuesday night.

Trump bestowed the Medal of Honor on conservative talk radio host Rush Limbaugh to raucous applause and a glum reception from House Democrats.

At the State of the Union address Tuesday night, President Donald Trump awarded conservative radio host Rush Limbaugh a Presidential Medal of Freedom for "the millions of people a day that you speak to and inspire and all the incredible work that you have done for charity."

As Trump spoke of protecting Second Amendment rights, Fred Guttenberg, a gun reform activist whose daughter Jamie was killed in a mass shooting at Marjory Stoneman Douglas High School in Parkland, Florida, spoke out against the president. He was then escorted out of the House chamber.

Fred Guttenberg, a gun reform activist whose daughter Jamie was killed in a mass shooting at Marjory Stoneman Douglas High School in Parkland, Fla., was escorted out of the House chamber during the State of the Union address for speaking out amid Trump’s comments on protecting Second Amendment rights.

One of the only bipartisan moments of the evening appeared to be when everyone in the House chamber stood and applauded guest Juan Guaidó, the Venezuelan opposition leader trying to oust President Nicolás Maduro.

President Donald Trump recognized Venezuelan opposition leader Juan Guaidó, who was in attendance at Trump’s State of the Union address.

"My fellow Americans, the best is yet to come," Trump finished. Pelosi had already gathered the papers for her big finish.

The moment was a less joyful echo of last year's State of the Union, when Pelosi stole the show with a smirk-and-clap, eye to eye with Trump. Then, Democrats were triumphant after election gains that flipped the House from Republican control and put Pelosi back in the speaker's chair.

Several of Trump's 2020 Democratic challengers shared their reaction to the president's speech.

“President Trump has told the American people that the economy is booming like it has never boomed before. For President Trump and his billionaire friends, he is right," Sen. Bernie Sanders, I-Vt., said in a speech to supporters in Manchester, New Hampshire.

"Tonight, we heard the president of the United States deliver a campaign speech from the floor of the United States House of Representatives — a misleading litany of half-truths, no-context statistics and outright lies," former Vice President Joe Biden said in a statement. "He spent almost no time offering a forward-looking vision for the nation but had ample words about the 'previous administration.'" 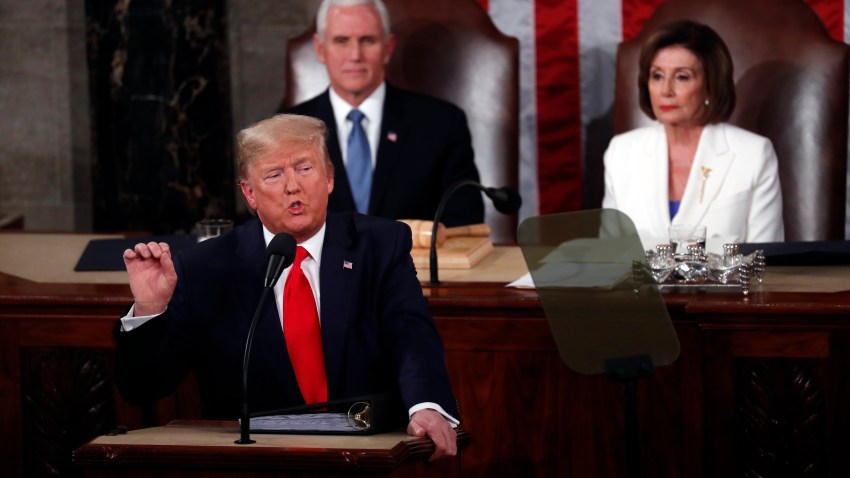 State of the Union Feb 5

"Mr. Trump’s argument is that we are in the midst of an economic comeback. We are not," Tom Steyer said in a statement. "The numbers he will tout tonight only tell a story of an economy that’s working for the wealthy, while most Americans’ wages have remained virtually flat for 30 years. He will tout low unemployment, while mothers and fathers across the nation have to work two to three jobs to make ends meet. I am running for president because I am the only candidate in the Democratic field that can expose Trump as a fraud and failure on the economy."

"Speaking of judges … We are one Supreme Court Justice away from women losing their right to choose," former New York City Mayor Michael Bloomberg tweeted. "That’s hardly something to celebrate. ... To be fair, some groups have done very well during this presidency — oil lobbyists, autocrats, and Trump children. ... Trump’s wall won’t fix our broken immigration system. Especially when the sections that Trump has managed to build are falling down. Americans don’t want it, but Trump’s ego demands it."

Sen. Amy Klobuchar of Minnesota and Sen. Elizabeth Warren of Massachusetts tweeted their thanks to Michigan Gov. Gretchen Whitmer, who delivered the official Democratic response to Trump's speech.

"As Michigan Governor @GretchenWhitmer said, “You can listen to what someone says, but to know the truth, watch what they do." Donald Trump has broken his promises to the working people of this country. It's time for a President who will have their backs and get things done," Klobuchar said.

"Thank you @GretchenWhitmer for your important #SOTU response speech—and for continuing to share a vision of what our country can be when we offer everyone a path to opportunity and a good life," Warren tweeted.

Republicans cheered the president and his accomplishments following his speech.

Senate Majority Leader Mitch McConnell of Kentucky tweeted his response to the address, writing "the state of our union is strong."

Alaska Sen. Lisa Murkowski also tweeted a video of her response, saying "the past few months have been painfully polarizing in the Congress, and across much of the country. But tonight we saw reminders of why we should have hope for our nation."