Standoff Between Cuban Government and Activists Begins Ahead of March

Cuban state security surrounded the house of Yunior García, an artist who has emerged as one of the country's leading activists and organized a march planned for Monday

A standoff began Sunday between Cuba’s communist-run government and young activists who have been calling for a peaceful march for change Monday.

State security since early Sunday has surrounded the home of Yunior García, an artist who has emerged as one of the country’s leading activists and called for islandwide protests Monday. Foreign credentialed media were kept several hundred feet away.

García, 39, an artist and playwright, had said he would march alone, dressed in white and holding a white rose, at 3 p.m. Sunday to represent those who wouldn’t be able to Monday, but he was prevented from doing so. Instead, he showed the white rose, a symbol of peace, out his window. 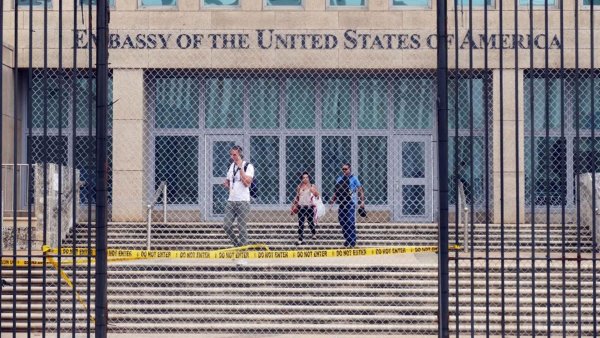 Outside García’s building, pro-government Cubans gathered since the morning shouting pro-Fidel Castro chants with music and dancing, scenes that were tweeted by activists. They also hung a giant Cuban flag over part of the building García lives in, partly blocking his window. He put a sign outside his house that said, "Mi casa está bloqueada" ("my house is blocked").

A recent surge of anti-government protests in Cuba have turned a spotlight back on calls for reform in the one-party Communist country. And for Cuban Americans whose families left the country in previous decades, it’s a reminder of what was lost and gained in their immigration to the U.S. NBCLX storyteller Eric Rodriguez takes a closer look at the Cuban emigration stories that are at the heart of the Cuban American experience.