Much of San Diego’s coast was reopened just in time for beachgoers to experience an unpredictable natural phenomenon – and one photographer searching for electric blue waves found a candid couple instead.

Ashwin Salvi was at Windansea Beach in La Jolla Wednesday night trying to get a closer look at the bioluminescence lighting up San Diego’s water.

Just before 11 p.m., Salvi found the perfect angle: a rolling, electric blue wave in the distance, and two people perched on a rock in the foreground.

Salvi didn’t know who the duo was, and with social distancing guidelines still in place, among other factors, he didn’t get close enough to find out.

The photographer said the waves were, “Epic. Absolutely epic.”

Salvi posted the picture on his Instagram, with the caption, “I want a love like this. Help me find these two people - photo taken April 29, 2020 at Windansea in San Diego! Who are you?!?”

NBC 7 and Salvi reshared the photo to see if anyone knew who the couple was -- at Windansea Beach on April 29 at around 11 p.m. -- so they could keep this special photo forever.

After more than 100 comments, the happy couple was found: Katja and Charlie! Stay safe out there, lovebirds.

You can see more incredible bioluminescence pictures on Salvi's Instagram.

What is bioluminescence?
The bright blue light, created by phytoplankton through a process called bioluminescence, can only be spotted from the shoreline on rare occasions and is not yet entirely understood by scientists, according to the Scripps Institution of Oceanography.

It's hard to predict when the phenomenon will occur, but there have been reports of bioluminescence along Southern California beaches for several weeks.

One lucky boater in Newport Beach spotted streaks of bioluminescence created by dolphins zipping through the ocean waters, which appeared to make the marine mammals glow in an electric blue shade. 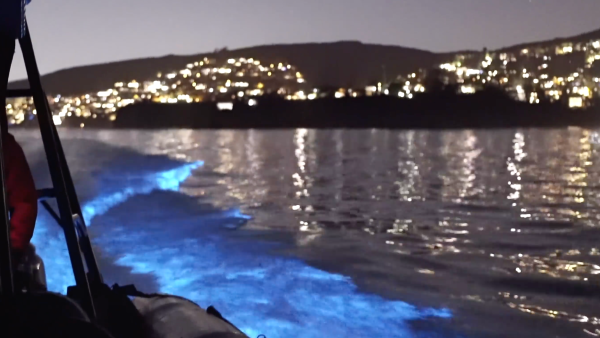