Ginsburg Makes History as First Woman, Jewish American to Lie in State at US Capitol

Even after death, Ruth Bader Ginsburg is still making history. The late Supreme Court justice became the first woman in American history to lie in state at the U.S. Capitol in commemoration of her extraordinary life.

Harris said RBG, as the late justice is known by many, “absolutely” and intentionally cleared a path for women like her in civic life. 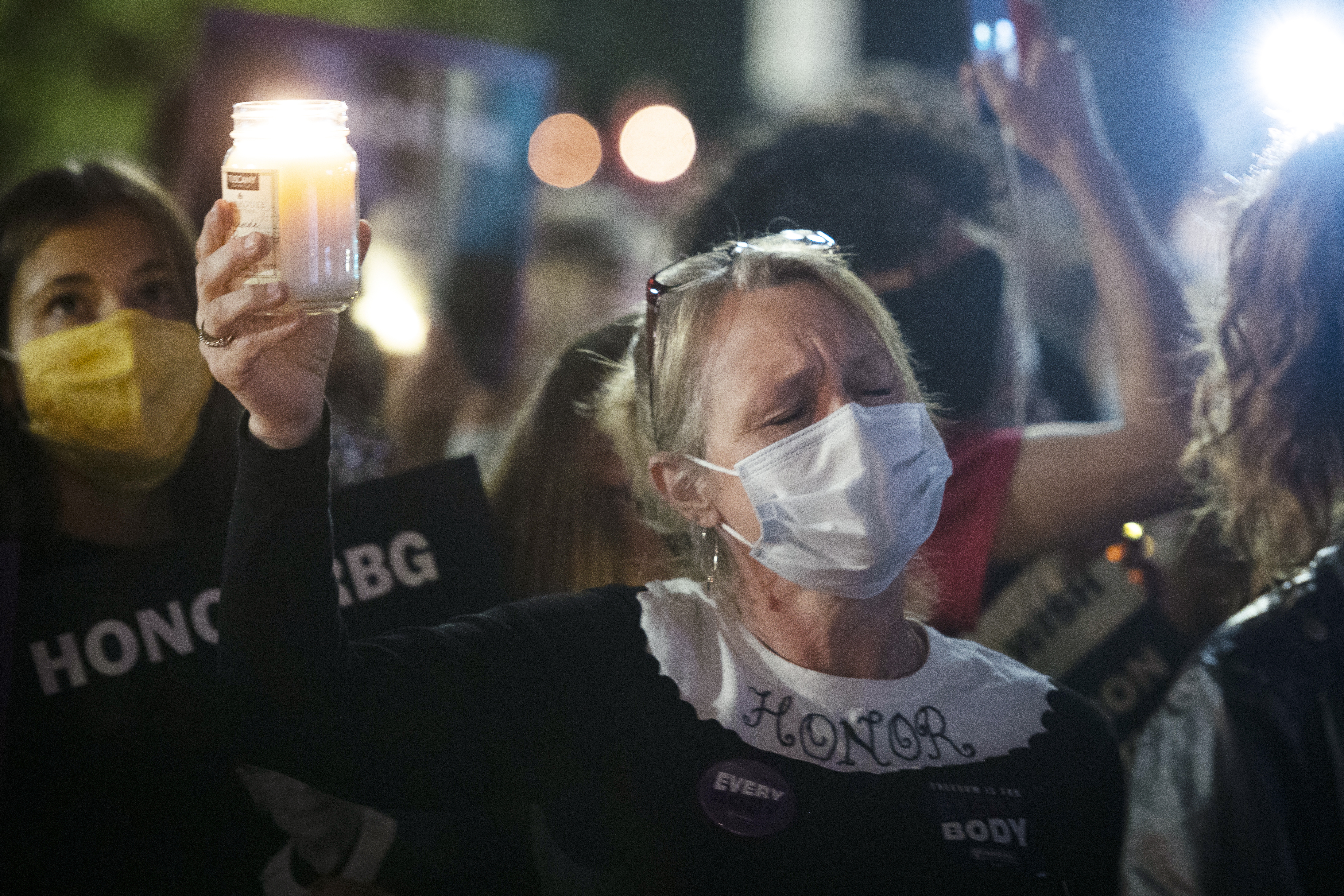 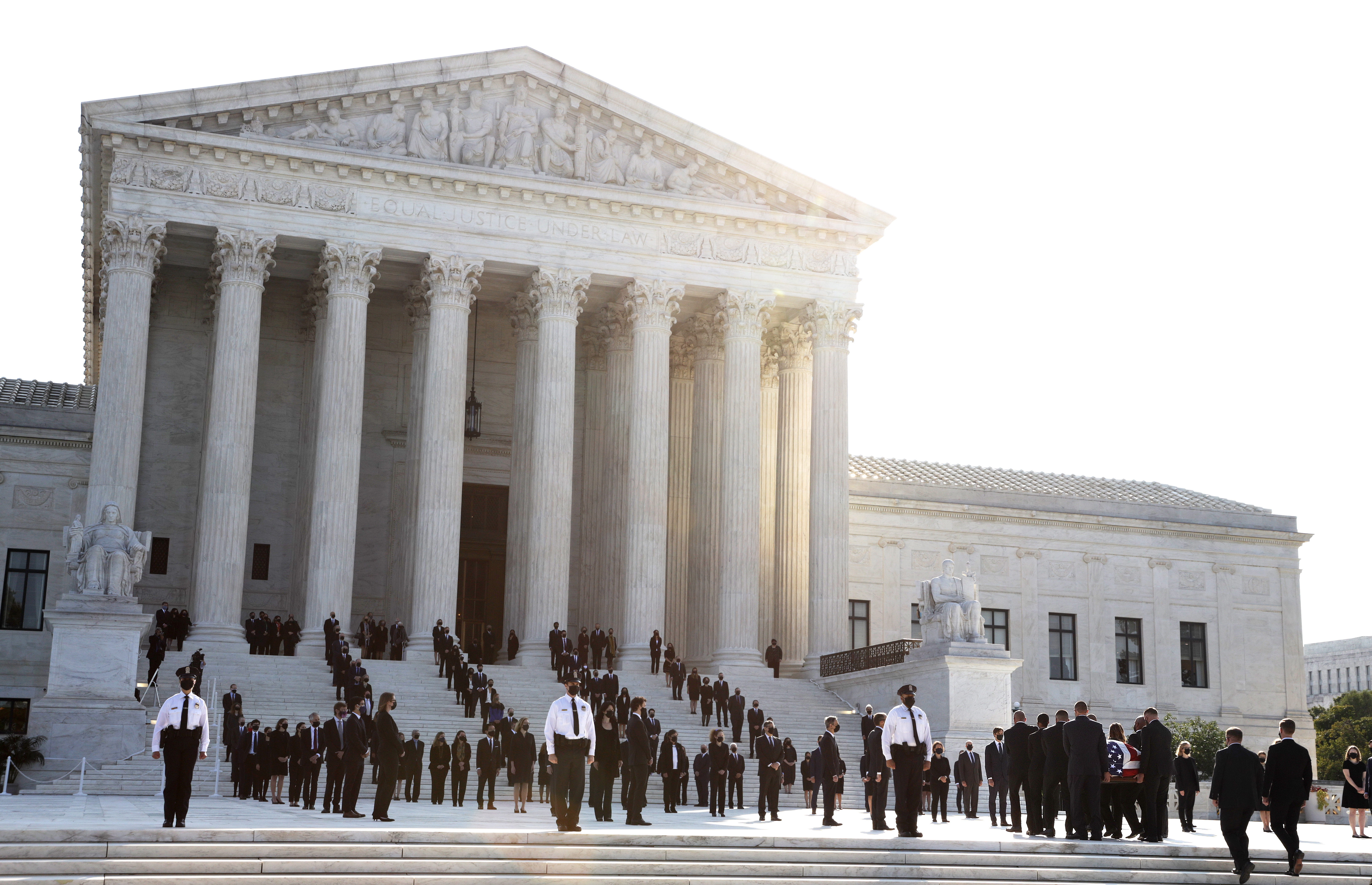 “She, first of all, made America see what leadership looks like -- in the law, in terms of public service -- and she broke so many barriers,” Harris told reporters at the Capitol. “And I know that she did it intentionally knowing that people like me could follow.”

She called Ginsburg “one of the greatest Americans.”

Mourners gathered under coronavirus restrictions for the service for Ginsburg, who died last week at age 87, as her casket made made the short procession from the court's iconic steps where it had been on public view Friday to the East Front of the Capitol. A military honor guard carried it inside the Capitol's stately Statuary Hall.

Pelosi and Senate Democratic leader Chuck Schumer welcomed Ginsburg’s casket with the Capitol in turmoil. President Donald is prepared to announce a conservative nominee to replace the justice on Saturday, weeks before the election. A Senate confirmation vote is expected in late October.

Ruth Bader Ginsburg’s personal trainer, Bryant Johnson, honored the late justice with a set of pushups at the U.S. Capitol on Friday.

Speaking ahead of the event, Pelosi told CBS that Americans need to know what’s at stake for the “rush” to confirm Ginsburg’s replacement.

The politics of the moment, in a tense election year, rippled throughout the celebrations this week of Ginsburg’s life and career. But Friday's ceremony began as a celebration and honoring of her life and work, with musical selections from one of Ginsburg’s favorite opera singers, mezzo-soprano Denyce Graves. She is the first Jewish American to lie in state at the Capitol.

Small in stature, large in history, the Brooklyn-born Ginsburg was remembered as a bright Columbia graduate who was passed over for jobs at a time when few women entered law, only to go on to reshape the nation’s laws protecting women’s rights and equality.

“Brick by brick, case by case,” said Rabbi Lauren Holtzblatt of the Adras Israel Congregation in Washington, she changed the course of American law. “Today, she makes history again,” the rabbi said.

"Ginsburg was our prophet, our North Star, our strength for so long," said Holtzblatt. "Now she deserves to rest, after toiling so hard for every single one of us."

Few Republicans attended the service that was filled with women and Democrats. Sens. Elizabeth Warren of Massachusetts and Amy Klobuchar of Minnesota, both former presidential contenders, were among those attending.

Senate Majority Leader Mitch McConnell, who is leading the push for Trump’s nominee to replace Ginsburg, was invited but notably missing. The GOP whip, Rep. Steve Scalise of Louisiana, was there.

Services were brief, with the rabbi's reflections and prayer, before guests lined up to pass by the casket and pay their respects.

Toward the end of the line of mourners, one dropped to the ground and did three quick pushups. It was Bryant Johnson, the justice's beloved trainer of her popular workouts.

Members of the House and Senate who are not invited to the ceremony because of space limitations imposed by the coronavirus pandemic were able to pay their respects before a motorcade carrying Ginsburg's casket departed the Capitol early afternoon.

Thousands of people waited hours in line to file past the casket of the late Justice Ruth Bader Ginsburg. Mourners say her life and legacy has left them with a renewed sense of purpose. News4's Mark Segraves reports.

The honor of lying in state has been accorded fewer than three dozen times, mostly to presidents, vice presidents, and members of Congress. Rep. John Lewis, the civil rights icon, was the most recent person to lie in state following his death in July. Henry Clay, the Kentucky lawmaker who served as Speaker of the House and also was a senator, was the first in 1852. Rosa Parks — a private citizen, not a government official — is the only woman who has lain in honor at the Capitol.

Ginsburg has lain in repose for two days at the Supreme Court, where thousands of people paid their respects, including President Donald Trump and first lady Melania Trump on Thursday. Spectators booed and chanted “vote him out” as the president, who wore a mask, stood silently near Ginsburg's casket at the top of the court's front steps.

Trump plans to announce his nomination Saturday of a woman to take Ginsburg's place on the high court, where she served for 27 years and was the leader of the liberal justices.

Ginsburg, the second woman to serve on the Supreme Court, will be buried next week in Arlington National Cemetery beside her husband, Martin, who died in 2010.