The Trump administration sued former national security adviser John Bolton on Tuesday to delay the publication of a book that the White House says contains classified information and that is expected to paint an unfavorable portrait of the president's foreign policy decision-making.

The civil lawsuit in Washington's federal court follows warnings from President Donald Trump that Bolton could face a "criminal problem" if he doesn't halt plans to publish the book, which is scheduled for release next week.

The complaint is the latest salvo in a contentious relationship between Trump and the hawkish Bolton, who was abruptly forced from the White House last September after repeated disagreements on national security matters. It moves their rift into court, where a judge will be asked to decide whether Bolton short-circuited proper procedures to get his book on the market — something his lawyer and publisher have strongly denied.

His publisher, Simon & Schuster, called the lawsuit "nothing more than the latest in a long running series of efforts by the administration to quash publication of a book it deems unflattering to the president." It said in a statement Tuesday evening that Bolton had worked with White House officials to address their concerns, and that it "fully supports his First Amendment right" to tell his story.

Similarly, Bolton’s attorney, Chuck Cooper, has said Bolton worked for months with classification specialists to avoid releasing classified material. He has accused the White House of using national security information as a pretext to censor Bolton. 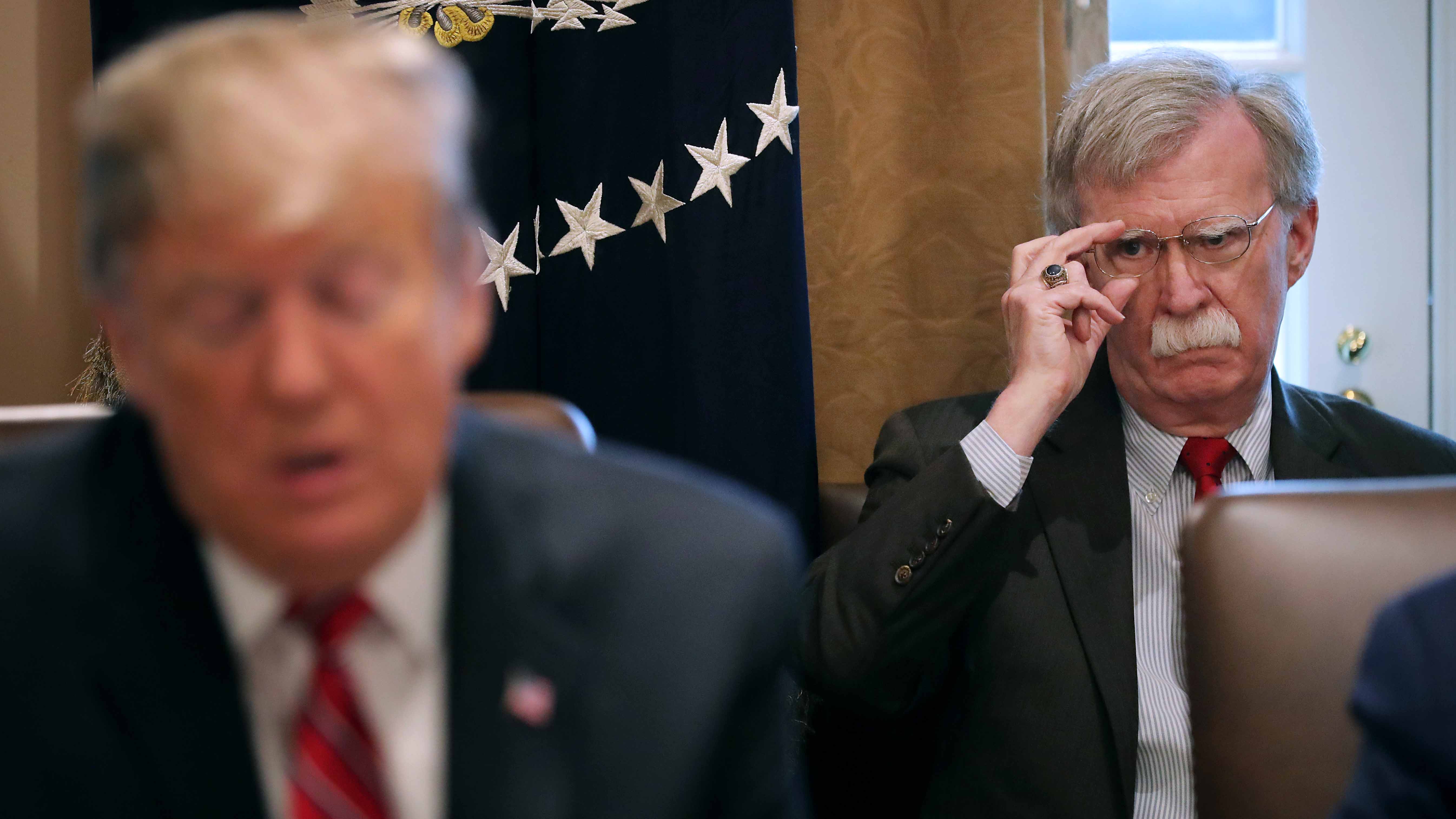 In its lawsuit, the Justice Department administration contends that the former adviser did not complete a pre-publication review to ensure that the manuscript did not contain classified material. It requests that a federal court order Bolton to "instruct or request" that his publisher further delay publication of the book to allow for a completion of the national security review process and to "retrieve and dispose" of existing copies in a manner acceptable to the government.

The Justice Department also is seeking to prevent Bolton from profiting off the book, particularly if he "refuses to complete the prepublication review process and obtain the required prior written authorization before proceeding with publishing the book."

In its lawsuit, the Justice Department argues that Bolton’s job meant he "regularly came into possession of some of the most sensitive classified information that exists in the U.S. government." Officials said Bolton’s manuscript was more than 500 pages and was "rife with classified information, which he proposed to release to the world."

"The United States is not seeking to censor any legitimate aspect of Defendant’s manuscript; it merely seeks an order requiring Defendant to complete the prepublication review process and to take all steps necessary to ensure that only a manuscript that has been officially authorized through that process — and is thus free of classified information — is disseminated publicly," the lawsuit says.

Bolton’s book, "The Room Where It Happened: A White House Memoir," was supposed to be released in March. Its release date was twice delayed and it is now set to be released next week by Simon & Schuster.

"Bolton covers an array of topics — chaos in the White House, sure, but also assessments of major players, the president’s inconsistent, scattershot decision-making process, and his dealings with allies and enemies alike, from China, Russia, Ukraine, North Korea, Iran, the United Kingdom, France, and Germany," according to the publisher.

"I am hard-pressed to identify any significant Trump decision during my tenure that wasn’t driven by reelection calculations," Bolton writes in the book, according to a news release from the publisher.

The book has been highly anticipated for months, especially after news broke during Trump's impeachment trial that the manuscript offered a vivid account of the president's efforts to freeze military aid to Ukraine until the country assisted with investigations into Trump's political rival Joe Biden. Those allegations formed the crux of the impeachment case, which ended in February with the president's acquittal in the Senate.

Cooper did not immediately return an email seeking comment on the lawsuit Tuesday. He has previously said that he sent Bolton’s manuscript to White House classification specialist Ellen Knight in late December and that Knight and Bolton spent nearly four months going through the book multiple times, "often line by line."

According to the lawsuit, Knight completed her review in late April and determined that the manuscript draft did not contain classified information.

Deputy Counsel to the White House Patrick Philbin told the Senate on Wednesday that the White House counsel’s office first learned about John Bolton’s allegations in an unpublished manuscript when contacted by The New York Times. The Times reported that Bolton’s book alleges President Donald Trump told him he tied military aid to Ukraine to investigations into the Bidens by...

But early the next month, Michael Ellis, the National Security Council's senior director for intelligence, began an additional review of the manuscript and found classified information in it, the lawsuit says. The review was still ongoing earlier this month when media reports revealed that Bolton intended to move forward with his book.

In a statement Tuesday, the American Civil Liberties Union said the lawsuit is "doomed to fail." Ben Wizner, the director of the organization's speech, privacy and technology project, said the Supreme Court had rejected a half-century ago the Nixon administration's efforts to block the publication of the Pentagon Papers, and said it is well-established that prior restraints on publication are unconstitutional.