The daylong session started Tuesday with the setback for Republican Senate leader Mitch McConnell and the president's legal team, but it ended near 2 a.m. Wednesday with Republicans easily approving the rest of the trial rules largely on their terms. The result is the Trump's historic trial, unfolding amid a watchful public in an election year.

"We have a great case," Trump said as he began his second day at a global economic forum in Davos, Switzerland. He said he thought his legal team was doing a "very good job." 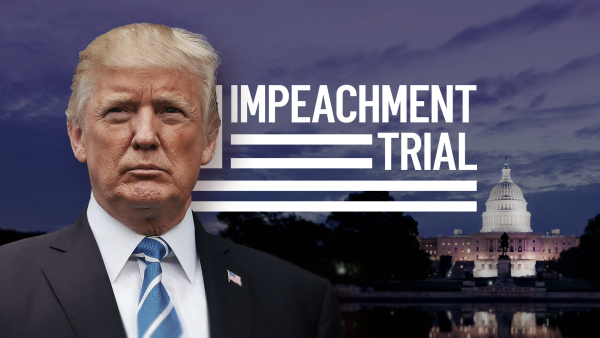 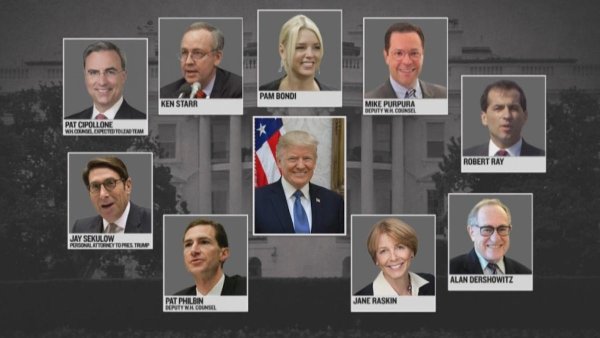 Who's Who on Trump's Legal Team for Impeachment Trial

The trial is now on a fast-track with almost no signs of Republican resistance to the actions that led to his impeachment.

"It’s about time we bring this power trip in for a landing," said White House counsel Pat Cipollone, the president's lead lawyer, lashing out at the House Democrats prosecuting the case.

"It’s a farce," he said about the impeachment proceeding, "and it should end."

Chief Justice John Roberts gaveled open the session, with House prosecutors on one side, Trump's team on the other, in the well of the Senate, as senators sat silently at their desks, under oath to do "impartial justice." No cellphones or other electronics were allowed.

As the day stretched deep into the night, lawyerly arguments gave way to more pointedly political ones. Tempers flared and senators paced the chamber. Democrats pursued what may be their only chance to force senators to vote on hearing new testimony.

Rep. Zoe Lofgren, D-Calif., and Rep. Val Demings, D-Fla., made history Tuesday when they spoke as impeachment managers during the Senate trial of President Donald Trump.

After one particularly bitter exchange, Roberts intervened, taking the rare step of admonishing both the Democratic House managers and the White House counsel to "remember where they are."

"I think it is appropriate at this point for me to admonish both the House managers and the president's counsel in equal terms to remember that they are addressing the world's greatest deliberative body," the usually reserved Roberts said. He asked them to "avoid speaking in a manner and using language that is not conducive to civil discourse."

Over and over, Republicans turned back Democratic amendments to subpoena documents from the White House, State Department, Defense Department and budget office. By the same 53-47 party-line, they turned away witnesses with front-row seats to Trump's actions including acting White House chief of staff Mick Mulvaney and John Bolton, the former national security adviser critical of the Ukraine policy.

Fact Check: Trump's Distortions Are Across the Board 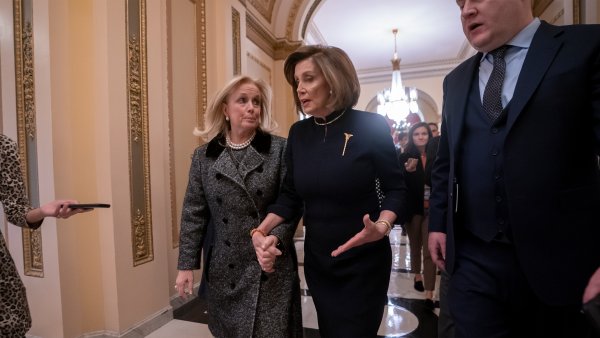 Only on one amendment, to ensure a vote later on additional witnesses, did a single Republican, Sen. Susan Collins of Maine, join Democrats. But it, too, was rejected 52-48.

"It's not our job to make it easy for you," Rep. Adam Schiff, the chairman of the House Intelligence Committee leading the prosecution, told the Senate. "Our job is to make it hard to deprive the American people of a fair trial."

As the visitors' gallery filled with guests, actress-and-activist Alyssa Milano among them, and Trump’s most ardent House allies lining the back rows, the day quickly took on the cadence of a trial proceeding over whether the president's actions toward Ukraine warranted removal from office.

Chief Justice John Roberts took a moment during the first day of President Donald Trump’s impeachment trial to remind both the House managers and White House legal team about the proper way to behave in front of the United States Senate.

Cipollone led the prosecution, scoffing that the House charges against Trump were “ridiculous,” insisting the president “has done absolutely nothing wrong.”

The White House legal team did not dispute Trump's actions, when he called Ukraine and asked for a “favor,” which was to investigate Democrat Joe Biden as the U.S. was withholding military aid the ally desperately needed as it faced off with hostile Russia on its border. But the lawyers insisted the president did nothing wrong. “Absolutely no case,” Cipollone said.

Schiff, the California Democrat, opened for the prosecution saying America's Founders added the remedy of impeachment in the Constitution with “precisely this type of conduct in mind — conduct that abuses the power of office for a personal benefit, that undermines our national security, and that invites foreign interference in the democratic process of an election."

Said Schiff: "It is the trifecta of constitutional misconduct justifying impeachment.''

The other lead lawyer on Trump's team, Jay Sekulow, retorted, "I'll give you a trifecta," outlining complaints over the House Democrats' impeachment inquiry process. 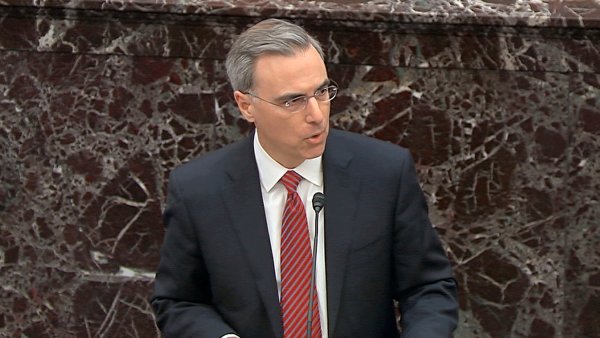 The impeachment trial, unfolding in an election year, is testing whether Trump's actions toward Ukraine warrant removal at the same time that voters are forming their own verdict on his White House.

All four senators who are presidential candidates are off the campaign trail, seated as jurors. "My focus is going to be on impeachment," Sen. Bernie Sanders, the Vermont independent, told reporters.

White House Counsel Jay Sekulow on Tuesday said executive privilege issues should have been hashed out in the courts before the start of the impeachment trial in the Senate.

McConnell stunned senators and delayed the start of proceedings with his decision to back off some of his proposed rules. He made the adjustment after encountering resistance from Republicans during a closed-door lunch meeting. Senators worried about the political optics of "dark of night" sessions that could come from cramming the 24 hours of opening arguments from each side into just two days.

Collins and Sen. Lisa Murkowksi of Alaska, who often buck party leadership, along with a substantial number of other Republicans, wanted to make the changes, according to people familiar with the situation.

It was only when the clerk started reading the dry language of the resolution that the hand-written changes to extend debate to three days became apparent. It also allowed the House impeachment record to be included in the Senate.

The turnaround was a swift lesson as White House wishes run into the reality of the Senate. The White House wanted a session kept to a shorter period to both expedite the trial and shift more of the proceedings into late night, according to a person familiar with the matter but unauthorized to discuss it in public.

"READ THE TRANSCRIPTS!" the president tweeted from overseas, at a global leaders conference in Davos, Switzerland.

That's the transcript of his phone call in which he asked new Ukrainian President Volodymyr Zelensky for "a favor." The Democrats cite that transcript as solid evidence against Trump, though he repeatedly describes it as "perfect."

The House impeached Trump last month on a charge of abuse of power for pushing Ukraine to investigate Democratic rival Biden and his son Hunter Biden as the White House was withholding military aid from Ukraine. Trump also was impeached on a second charge, of obstruction of Congress, in the House probe.

Trump's legal team, absent its TV-showcase attorneys, Alan Dershowitz and Kenneth Starr who were not in the chamber, argued that in seeking new evidence the House was bringing a half-baked case. 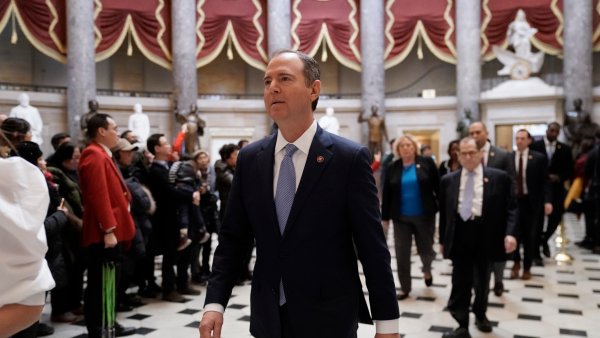 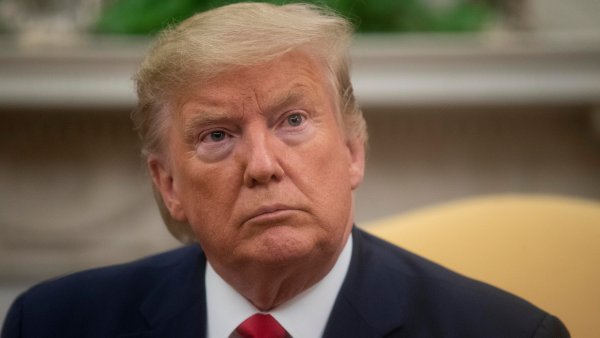 Senate Majority Leader Mitch McConnell, R-Kentucky, and Minority Leader Chuck Schumer, D-New York, discuss their views about if and when witnesses can be called to testify during the impeachment trial of President Donald Trump.

The White House had instructed officials not to testify in the House inquiry, and refused to turn over witnesses or documents, citing what is says is precedence in defiance of congressional subpoenas.

The ambassadors and national security officials who did appear before the House delivered often striking testimony, highlights that were displayed on television screens during the Senate proceeding.

At one point, Democrat Schiff displayed video of Trump himself suggesting there should be more witnesses testifying.

One by one, the House managers made the case, drawing on their own life experiences.

Rep. Val Demings, D-Fla., a former police chief, said she never saw anyone take "such extreme steps to hide evidence.'' Rep. Jason Crow, a former Army Ranger who served in Iraq and Afghanistan, seemed to capture senators' attention when he told them near he knew the hour was late, but it was morning in Ukraine where soldiers were waking up to fight Russia, depending on U.S. aid.

It was when Rep. Jerrold Nadler, the House Judiciary Committee chairman also leading the prosecution, said the White House lawyers "lie" that Cipollone and Sekulow retorted that Nadler should be embarrassed and apologize, leading to Roberts' admonition.

No president has ever been removed from office. With its 53-47 Republican majority, the Senate is not expected to mount the two-thirds vote needed for conviction. 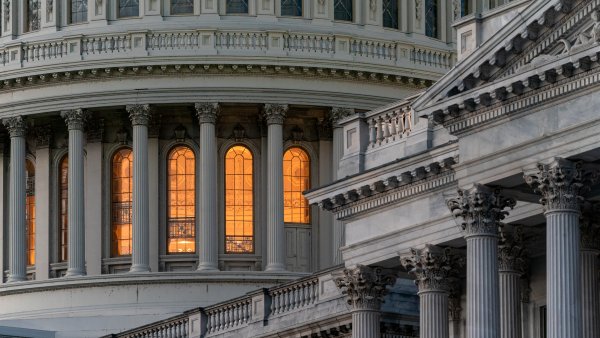 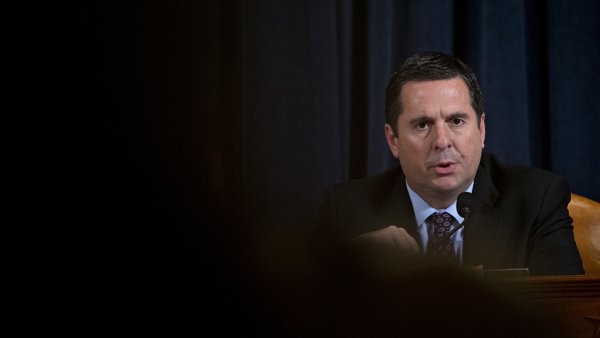