Overnight shootings near the Atlantic oceanfront in Virginia Beach left two people dead and eight wounded in a scene described by authorities on Saturday as “very chaotic.”

A woman who died was likely an innocent bystander, authorities said, while the other person, a Black man, was killed by a police officer. It was not clear if the man was armed and the officer's body camera was not activated at the time of the shooting.

Three men ranging in age from 18 to 22 have been arrested and face charges that include felonious assault and reckless handling of a firearm, Virginia Beach police said in a statement on Saturday.

The first shooting occurred shortly after 11 p.m. Friday along an outdoor strip of hotels, clubs and restaurants that was densely packed with people on one of the first warm days of the year. 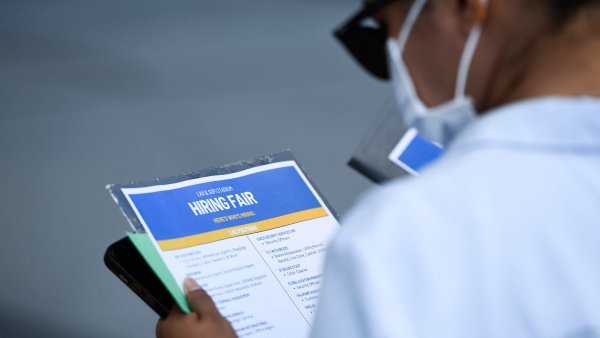 Witness Akereia Drayton said Saturday that she was coming out of a club on Friday night after the shooting ended and saw “mass chaos” and many people running.

“People were literally falling over themselves,” Drayton said.

Investigators believe the first shooting stemmed from a fight involving a group of people, police said.

“Several individuals produced firearms and began shooting at each other, resulting in numerous people being wounded,” the police department statement said.

Police said they found a female bystander about a block away who died of her injuries from a second shooting incident. Investigators believe the woman's death was not related to the initial shooting.

At around the same time, police initially said that a uniformed officer in that area “encountered an armed citizen” and fatally shot him.

A firearm was found “in the vicinity” of the shooting, later Virginia Beach Police Chief Paul Neudigate said during a news conference Saturday night. The man was later identified as Donovon W. Lynch, 25, of Virginia Beach.

Neudigate said the officer who killed Lynch was wearing a body camera but, “for unknown reasons,” it was not activated.

“We would like to provide the community answers. At this point we do not have them,” the police chief said.

A Virginia Beach police officer was also struck by a vehicle, authorities said. He was treated for his injuries and released from the hospital.

A total of 10 people were wounded by gunfire, including the two who died, according to police.

Sentara Virginia Beach General Hospital said four people wounded in the gunfire remained in the hospital on Saturday. All four of them were in good condition, a hospital spokeswoman said in an email.

Police said they are being held in a jail in Virginia Beach. It's unclear if they've hired attorneys, who could be contacted for comment on their behalf.

The bystander who died in the second shooting incident was Deshayla E. Harris, 28, of the nearby city of Norfolk, police said. No arrests have been made in connection with her death.

The officer who killed Lynch has been placed on administrative leave, police said. He has been with the department for five years and is assigned to its special operations division.

Lynch's father told WAVY-TV that his son was “a father’s dream.”

Adrian Montgomery, a security guard who works at one of the oceanfront hotels, said the initial shooting occurred in an outdoor area where a lot of young people hang out and “try to talk to girls.”

Montgomery said a woman told a man that she didn't want his phone number, which led to an altercation between that man and another man.

An exchange of gunfire between the two men followed, Montgomery said, before more shots were fired between people who were friends with each of the respective shooters.

“At that point, it just became a shooting gallery,” Montgomery said. “Whoever had a gun and felt threatened fired ... (They) were pulling out guns like they're cellphones.”

Montgomery, 31, said the people he saw get shot appeared to be innocent bystanders. One of them was his 17-year-old nephew who had to have surgery.

Montgomery added that the Virginia Beach oceanfront, which includes a boardwalk, was packed with people who were shoulder-to-shoulder on a warm, but tension-filled spring night.

Police on Saturday were still processing the crime scene, which included two full blocks that mostly make up a city-owned parking lot.

Bill Feis, who lives a few houses away from the parking lot, said he was in bed and could hear people talking loudly before the shooting, which he said “sounded like someone threw a package of firecrackers.”