Firefighters scrambled on Friday to control a raging inferno in southeastern Oregon that’s spreading miles a day in windy conditions, one of numerous conflagrations across the U.S. West that are straining resources.

Authorities ordered a new round of evacuations Thursday amid worries the Bootleg Fire, which has already destroyed 21 homes, could merge with another blaze that also grew explosively amid dry and blustery conditions.

The Bootleg Fire, the largest wildfire currently burning in the U.S., had torched more than 377 square miles (976 square kilometers) by Friday morning and was just 7% contained. It has stymied firefighters for nearly a week with erratic winds and extremely dangerous fire behavior. Early on, the fire doubled in size almost daily and strong winds from the south on Thursday afternoon yet again pushed the flames rapidly to the north and east.

The fire has the potential to move 4 miles (6 kilometers) or more in an afternoon and there was concern it could merge with the smaller, yet still explosive Log Fire, said Rob Allen, incident commander for the blaze. That fire started Monday as three smaller fires but exploded to nearly 5,000 acres (2,000 hectares) in 24 hours and was still growing, fanned by the same winds, Allen said. ‘A New Fire Every Day': Dozens of Wildfires Raging Across Western States 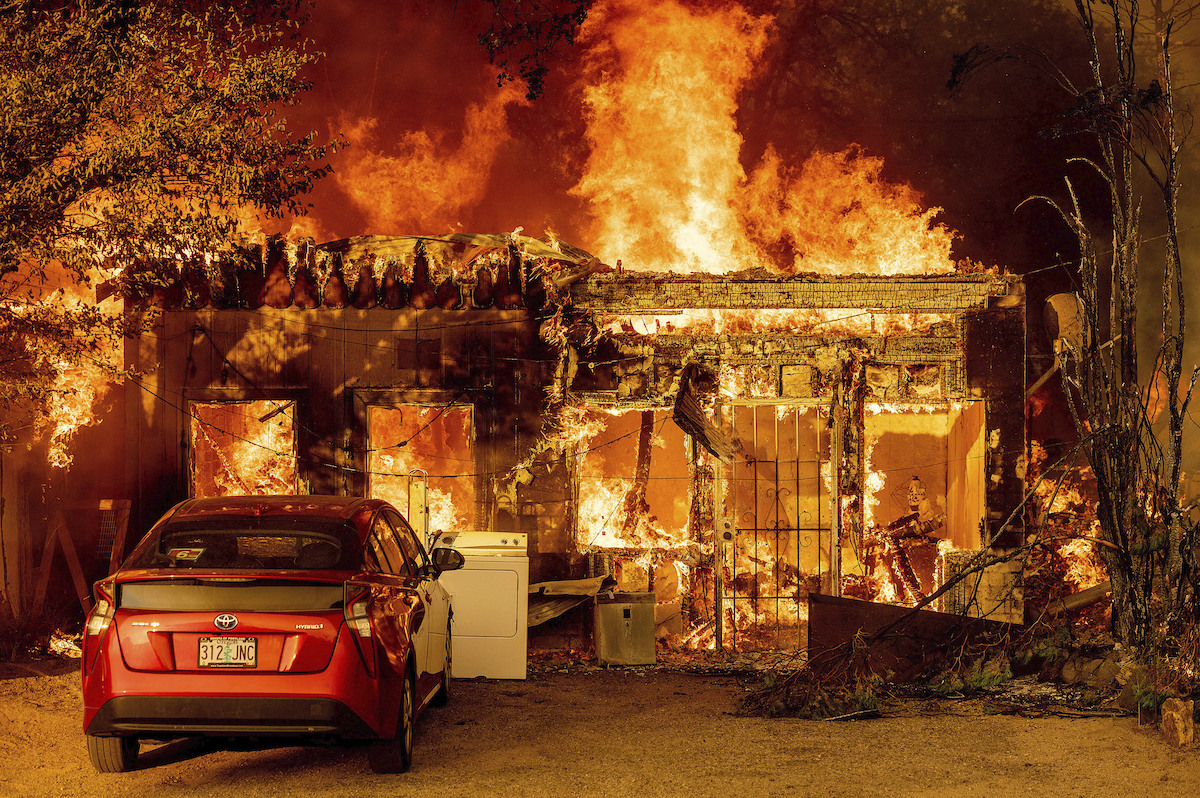 Firefighters were all pulled back to safe areas late Thursday due to intense fire behavior and were scouting ahead of the main blaze for areas where they could make a stand by carving out fire lines to stop the inferno's advance, he said.

Crews are watching the fire, nearby campgrounds "and any place out in front of us to make sure the public’s out of the way,” Allen said. He said evacuation orders were still being assessed.

The Bootleg fire is affecting an area north of the Oregon-California border that has been gripped by extreme drought. It was 7% contained as of Thursday, when authorities decided to expand previous evacuation orders near Summer Lake and Paisley. Both towns are located in Lake County, a remote area of lakes and wildlife refuges just north of the California border with a total population of about 8,000.

It has periodically generated enormous smoke columns that could be seen for miles — a sign that the blaze is so intense it is creating its own weather, with erratic winds and the potential for fire-generated lightning.

Meanwhile, a fire near the northern California town of Paradise, which burned in a horrific 2018 wildfire, caused jitters among homeowners who were just starting to return to normal after surviving the deadliest blaze in U.S. history.

Chuck Dee and his wife, Janie, returned last year to Paradise on the foothills of California's Sierra Nevada to rebuild a home lost in that fire. So when they woke up Thursday and saw smoke from the new Dixie Fire, it was frightening, even though it was burning away from populated areas.

“It made my wife and I both nervous,” he told The Associated Press in a telephone interview.

The Dixie Fire is part of a siege of conflagrations across the West. There were 71 active large fires and complexes of multiple fires that have burned nearly 1,553 square miles (4,022 square kilometers) in the U.S., mostly in Western states, according to the National Interagency Fire Center.

Extremely dry conditions and heat waves tied to climate change have swept the region, making wildfires harder to fight. Climate change has made the American West much warmer and drier in the past 30 years and will continue to make weather more extreme and wildfires more frequent and destructive.

Fire risk is high right now in California with high temperatures and an accumulation of dry brush. The state is warning residents to not even mow the lawn, in case their mower hits a rock and sparks a blaze that gets out of control. NBC San Diego meteorologist Keith Bryant explains.

In the Pacific Northwest, firefighters say they are facing conditions more typical of late summer or fall than early July.

A wildfire threatening more than 1,500 homes near Wenatchee, Washington, grew to 14 square miles (36 square kilometers) by Thursday morning and was about 10% contained, the Washington state Department of Natural Resources said.

About 200 firefighters were battling the Red Apple Fire near the north-central Washington city renowned for its apples. The fire was also threatening apple orchards and an electrical substation, but no structures have been lost, officials said.