The offer came as many Haitians resumed services in or outside damaged churches, sometimes for the first time since the magnitude 7.2 quake of Aug. 14

A gang leader is offering a truce as well as help for communities in southwestern Haiti that were shattered by an earthquake, raising a glimmer of hope for relief operations that have been disrupted by the looting of aid trucks and other disorder.

It remained to be seen whether anything would come from Sunday's offer by Jimmy Cherizier, alias “Barbecue.” While he is a powerful crime boss, Cherizier is far from the only gang leader in Haiti, and widely spread social media reports of a supposed earlier gang truce have failed to prevent attacks on the expanding relief effort.

The offer came as many Haitians returned to religious services in or outside damaged churches, sometimes for the first time since the magnitude 7.2 quake hit Aug. 14. Haiti's Civil Protection Agency also raised list of confirmed dead to 2,207.

Since the disaster, gangs have blocked roads, hijacked aid trucks and stolen supplies, forcing relief workers to transport supplies by helicopter. In places, desperate crowds have scuffled over bags of food. 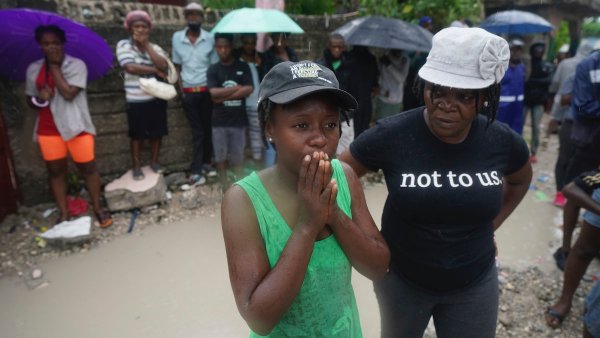 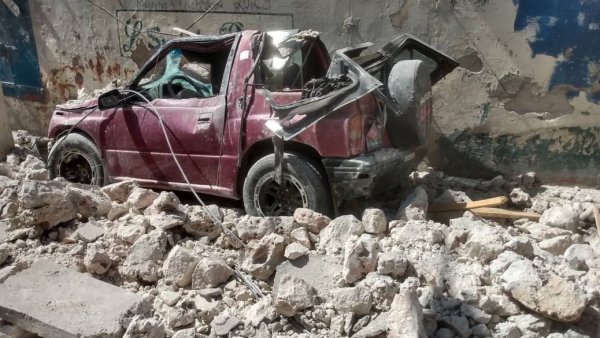 EXPLAINER: Why Haiti Is Prone to Devastating Earthquakes

In a video posted on Facebook, Cherizier addressed the hardest-hit parts of the Haiti's southwestern peninsula, saying: “We want to tell them that the G9 Revolutionary Forces and allies, all for one and one for all, sympathize with their pain and sorrows."

"The G9 Revolutionary Forces and allies ... will participate in the relief by bringing them help. We invite all compatriots to show solidarity with the victims by trying to share what little there is with them,” he said.

The increase in the death toll was the first since late Wednesday, when the government had reported 2,189 fatalities. The government said Sunday that 344 people were still missing, 12,268 people were injured and nearly 53,000 houses were destroyed by the quake.

A field hospital erected in Les Cayes by the humanitarian group Samaritan’s Purse scheduled four surgeries Sunday, the day after it opened.

Three of the 10 operating rooms that serve the region were not functioning after the earthquake, so the U.S.-based group opened its hospital on the Haiti campus of Central American University. The field hospital adds not only an operating room, but lab, pharmacy and X-ray capabilities.

Even a week after the earthquake, helicopters ferried in four seriously injured patients from remote areas Sunday.

Rescue teams continued to look through rubble for survivors on Monday, two days after a 7.2 earthquake hit Haiti.

Nurse Ali Herbert was preparing the operating room — a large tent — for a hand surgery Sunday afternoon. A surgery on a broken femur was scheduled for later. The fans to move the sweltering air and the open flaps on the tent to allow ventilation were major differences from a sterile operating theater, but far cleaner than the conditions most patients have been in until they arrive, she said.

“A normal operating room would not have this kind of setup,” Herbert said. “We just have to do what we can and keep it as clean as we can and hopefully the patients do okay.”

Some patients have received some initial treatment, but require more care. Others are being treated for the first time, she said.

People needing help also showed up at the public hospital across town Sunday. Space is at a premium and some are on beds outside the wards. If their injury is less serious they might be sitting on the ground on a square of cardboard.

Rousseau Hussein, a resident working in the emergency room, said the situation had calmed in the past week, but they continue to receive patients injured in the earthquake from outlying areas.

The hospital has been receiving support and at the moment had the supplies it needed to treat the cases he sees in the ER.

In Les Cayes, many attended church Sunday to mourn those lost and give thanks for their own survival.

At an evangelical church in the Bergeaud neighborhood, parishioners sang hymns under beams of sunlight streaming through holes in the roof and walls.

Pastor Sevrain Marc Dix Jonas, said Sunday's service was special because until now his congregation had been unable to meet since the quake.

“Today was a must,” Dix Jonas said, standing below a gaping opening high in his church's facade. “To thank God. He protected us. We did not die.”

His church was one of the few where congregants could worship inside. At many others, services were held in the street outside collapsed sanctuaries.

Taking that into account, the Roman Catholic church in Les Cayes moved its morning service to 6:30 a.m. to avoid the heat of day.

"In the past, the world came together but the aid did not get to the most vulnerable. And I hope this time will be different," says Laurent Lamothe, who served as Prime Minister of Haiti from 2012-2014. Though he's out of politics now, Lamothe is calling for world leaders to come together and help Haiti rebuild homes after an earthquake ruined homes and a tropical storm caused floods across the country 1 month after its president was assassinated.