Blanchard is currently serving a 10-year sentence for her role in the murder of her mother, who is said to have suffered from Munchausen syndrome by proxy

Gypsy Rose Blanchard, who rose to notoriety after the 2015 murder of her mother Dee Dee Blanchard, is engaged.

The 27-year-old accepted a proposal from a man she met through her prison's pen pal program, a family-friend and representative for Blanchard tells E! News.

"I mean it's something that she's been keeping under wraps for a little bit," Fancy Macelli shared. "It's very exciting for her, she's very excited."

She adds that Gypsy is keeping the details of the proposal private, but says that Gypsy and her suitor were "very practical" about their decision. 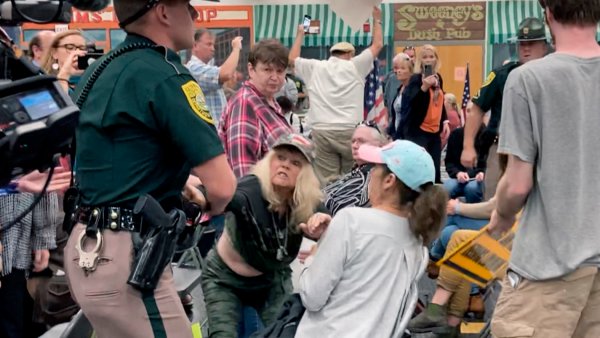 Blanchard is currently serving a 10-year sentence for her role in the murder of her mother, who is said to have suffered from Munchausen syndrome by proxy. The mental disorder caused Blanchard to fabricate her daughter's age and various medical ailments in order to gain sympathy and benefit from charitable organizations. Gypsy Rose was subjected to years of unnecessary medical treatment and abuse, which she testified during the trial is what pushed her to suggest that Nicholas Godejohn, her then boyfriend, should kill Dee Dee. Godejohn is currently serving a life sentence for the crime.

Victim or Villain? The Horrifying Truth Behind the Story of Gypsy Rose Blanchard's Escape From Her Mother

Macelli says that Blanchard and her future husband are going to wait until her release from prison to wed.

That is just one item on Gypsy's to-do list once she leaves prison, including a shopping trip to buy a real engagement ring to replace her temporary one. Macelli explains, "Another inmate was getting divorced and gave her that so like now for her to just have, so that she could feel good about it and then they'll go together and pick out rings, obviously later, at a time when she's out and they could do that and have their own intimate moment."

True crime fanatics were first introduced to Gypsy Rose's harrowing story when HBO released its "Mommy Dead and Dearest" documentary in 2017. Patricia Arquette and Joey King later signed on to portray the mother-daughter pair for Hulu's anthology series, "The Act."

While Gypsy is in prison and otherwise unaware of most pop culture moments, she does know about the show's recent release, which appears to be a source of mixed feelings. "She was very excited about [Joey King] portraying her but she's very unhappy with the actual series itself," her friend shares. She adds that she and Blanchard believe the show is too "sensationalized."

A petition established by Gypsy Rose's father is seeking "relief" for her prison time, either through a reduced sentence or transfer to a mental facility.

Blanchard will be available for parole in 2024.