The Assembly Judiciary Committee will have subpoena power, conduct interviews and review documents as part of an "expeditious, full and thorough investigation," Speaker Carl Heastie said

New York Assembly Speaker Carl Heastie on Thursday authorized a committee to launch an impeachment investigation into Gov. Andrew Cuomo, after a large group of lawmakers released a letter calling on him to resign following a sixth woman's accusations against the governor.

Heastie said the Assembly Judiciary Committee will have subpoena power, conduct interviews and review documents as part of an "expeditious, full and thorough investigation," which could cover topics from the alleged sexual misconduct to COVID-19 outbreaks at nursing homes.

“The legislature needs to determine for itself what the facts are,” a member of the committee, Assemblyman Tom Abinanti, said. “For the people who want immediate impeachment, I think we say please be patient. The process is slow. This could be the next step.”

The Assembly Judiciary Committee will launch an impeachment investigation, and will have subpoena power, conduct interviews and review documents to determine whether impeachment should be voted on. NBC New York's Jonathan Dienst reports.

Heastie said the committee's inquiry will not interfere with the state Attorney General Letitia James' investigation into Cuomo’s workplace conduct. James released a statement after the announcement, saying "today's action by the New York state legislature will have no bearing on our independent investigation into these allegations against Governor Cuomo. Our investigation will continue."

The launch of the Assembly's impeachment investigation comes after 59 Senate and Assembly Democrats released a joint letter calling on Cuomo to resign immediately, saying in part "he has lost the confidence of the public and the state legislature."

“In light of the Governor’s admission of inappropriate behavior and the findings of altered data on nursing home COVID-19 deaths he has lost the confidence of the public and the state legislature, rendering him ineffective in this time of most urgent need,” the letter said. “It is time for Governor Cuomo to resign.”

The Senate GOP also jointly called on Cuomo to resign. Altogether, that means 42 of 63 senators — including Majority Leader Andrea Stewart-Cousins — have now publicly called on the governor to step down. With any possible impeachment trial requiring only 46 votes to convict, the pressure is mounting, and Cuomo's grip on power increasingly tenuous.

There are now 42 New York State Senators calling for the governor to resign after the sixth accuser to come forward alleged that Cuomo reached his hand under her shirt and groped her. NBC New York's Jonathan Dienst reports.

Altogether, at least 121 members of the state Assembly and Senate have said publicly they believe Cuomo can no longer govern and should quit office now, according to a tally by The Associated Press. The count includes 65 Democrats and 56 Republicans.

The state Assembly is the house that could move to impeach Cuomo, needing a simple majority vote among its 150 members in order to convene an impeachment trial. Until the new allegations surfaced, most of its members appeared to be leaning against trying to convene an impeachment or demanding Cuomo’s resignation until the attorney general’s investigation was complete. Should the Assembly vote to impeach, the state Senate would then join with members of the state’s top appeals court to hold an impeachment trial.

The chairman of the state Democratic Committee – a Cuomo ally – said he respected the decision of those calling for the governor to resign and said the legislature should "commence its own review of these matters." Meanwhile, one of the largest women's groups in the country has joined the chorus for Cuomo to step down. The National Organization for Women called the governor "unfit to serve as the leader of his state for another day."

The impeachment inquiry comes after an aide to New York Gov. Andrew Cuomo says he groped her in the governor’s residence, a newspaper reported Wednesday, in the most serious allegation made yet by a series of women against the embattled Democrat.

The Times Union of Albany reported that the woman was alone with Cuomo late last year when he closed the door, reached under her shirt and fondled her. The newspaper’s reporting is based on an unidentified source with direct knowledge of the woman’s accusation, who said she first told the story to someone on Cuomo’s staff in recent days. The newspaper hadn’t spoken to the woman and didn’t identify her.

The governor had summoned her to the Executive Mansion in Albany, saying he needed help with his cellphone, the newspaper reported.

“I have never done anything like this,” Cuomo said through a spokesperson Wednesday evening. Cuomo’s office didn’t immediately respond to a request for comment Thursday.

“The details of this report are gut-wrenching,” Cuomo said Wednesday, adding that he would not speak to the specifics of this or any other allegation, given an ongoing investigation overseen by the state attorney general.

The governor did not address whether his office had been made aware of the allegation over the weekend, as was reported on Tuesday by the Albany newspaper. According to the Times Union, the complaint was then reported to the governor’s legal counsel and to the office of state Attorney General James.

His office confirmed Thursday that it referred the matter to the Albany Police Department for their review, after the woman involved declined to do so herself. Beth Garvey, the governor’s acting counsel, said in a statement that as a matter of state policy, the woman who made the allegations was told she should contact her local police department.

“In this case the person is represented by counsel and when counsel confirmed the client did not want to make a report, the state notified the police department and gave them the attorney’s information,” Garvey said. She said the state was obligated to do so under state law.

Albany Police Department spokesperson Steve Smith told The New York Times police had reached out to a representative for the woman and offered their services.

Cuomo faces harassment allegations from several other women and increasingly urgent calls for his resignation or impeachment from at least some fellow Democrats. The three-term governor has repeatedly said he won’t resign.

“All of us are extremely disappointed,” Assemblywoman Aileen Gunther, a Democrat representing Orange and Sullivan counties, told The Associated Press. “I think there’s no room in the world right now for that kind of behavior. He should have known better.”

Other higher-profile lawmakers also offered strong words on Thursday. U.S. Senate Majority Leader Chuck Schumer called the details of the latest allegation "particularly nauseating," while New York City Mayor Bill de Blasio — who has been known to spar with the governor — said it was "disgusting to me. He can no longer serve as governor."

The woman whose account was reported by the Times Union said Cuomo had touched her and made flirtatious comments on multiple occasions. According to the newspaper, her allegations came to light as Cuomo staffers watched the governor’s March 3 news conference, his first after a new round of sexual harassment claims made in late February.

In it, he denied ever touching a woman inappropriately. The aide subsequently became emotional, and told a female supervisor who approached her about her encounters with the governor. At least one supervisor reported the allegation to an attorney in the governor’s office Monday, the newspaper reported.

According to the Times Union, the woman has not filed a formal complaint. NBC New York has not independently verified the claim and the woman remains unidentified.

Prior to Wednesday’s report, the allegations against Cuomo include a combination of claims that he made the workplace an uncomfortable place for young women, ranging from flirtatious comments to a nonconsensual kiss.

The latest accuser old the Albany Times-Union that Cuomo's behavior went beyond cringeworthy comments. News 4 has not independently verified the claim and the woman remains anonymous at this time. NBC New York's Andrew Siff reports.

At least five accusers — Charlotte Bennett, Lindsey Boylan, Ana Liss, Karen Hinton and the latest accuser — worked for the governor in Albany or during his time in President Bill Clinton’s Cabinet. Another, Anna Ruch, told The New York Times that she met Cuomo at a friend’s wedding.

Bennett’s attorney, Debra Katz, said in a statement released Wednesday evening that the latest allegations are “eerily similar” to the former aide’s own story.

Bennett, 25, has said she was summoned to the Capitol on a weekend and left alone with Cuomo, who asked her for help with his cellphone. She has said Cuomo asked about her sex life and asked if she would be open to a relationship with an older man. Bennett did not allege that Cuomo tried to grope her.

“The Governor’s sexual harassment, which Charlotte Bennett reported, was buried by his aides and never properly investigated,” Katz’s statement said. “Because of their enablement, another young woman was left in harm’s way.”

Boylan, a former economic development director, said Cuomo commented on her looks, summoned her to unnecessary meetings, joked that they should play strip poker and once kissed her on the lips at the end of a meeting. She did her first on-camera interview Thursday since coming forward with her allegation, and blasted the governor's response to his alleged actions toward her and other women.

"We do not have accountability when the governor of this state preys on women mostly younger than myself, and then lies about it," the candidate for Manhattan borough president said. "Its the last fight I wanted my career to be about, but I will take it on because it is unjust."

Liss, another former aide, said Cuomo kissed her on the hand and cheek and made flirtatious comments that didn’t initially bother her, but which she came later to see as patronizing and improper in a work environment.

While Cuomo has denied inappropriately touching anyone, he has apologized for comments he made to women staffers. He has said he was engaging in what he thought was playful banter and didn’t realize it was making people uncomfortable. 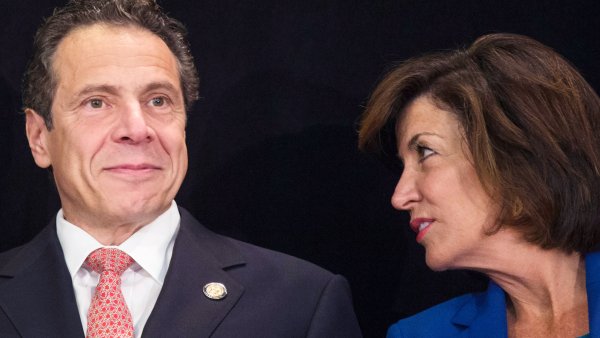 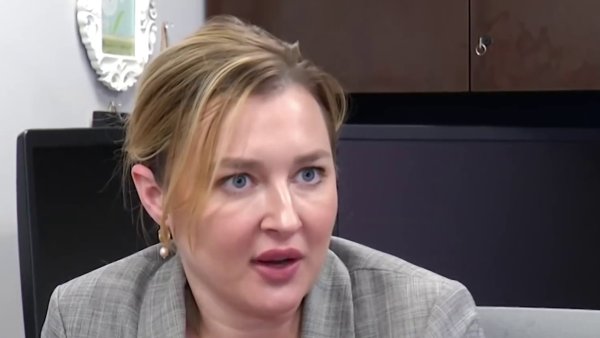 State Attorney General James has put together an investigative team to probe Cuomo’s workplace conduct. The governor has called on lawmakers and the public to await the results of that investigation. Federal investigators are also scrutinizing how his administration handled data concerning COVID-19 outbreaks at nursing homes.

Cuomo has been under fire for weeks, beginning with revelations that his administration withheld details from the public about the pandemic’s death toll among residents in state nursing homes. Scrutiny of the governor — who received accolades during the height of the coronavirus pandemic for leadership that yielded a book deal and calls for a national political career — intensified when Boylan, 36, reiterated harassment claims made in December, fleshing them out in a late February blog post.

The details of the allegations weren’t immediately clear, but the Times Union of Albany reported Tuesday that the woman said Cuomo inappropriately touched her late last year at the governor’s mansion, where she had been summoned to work. NBC New York's Ida Siegal reports.

Garvey said in a statement after the claim initially came to light that “all allegations that we learn of directly or indirectly are going promptly to the investigators appointed by the attorney general.”

The attorney general’s office has not commented on any of the allegations thus far, but on Thursday did set up a website to collect information regarding the investigation. It lists two phone numbers and an email to use for those who have information on the allegations or wanted to report alleged wrongdoing by Cuomo.

The AP contributed to this report.