Atlanta Police on Shooting Probe: ‘Nothing Is Off the Table'

Police said Thursday that “nothing is off the table” in the investigation of the deadly shootings at two Atlanta spas, including whether the slayings were a hate crime.

Those attacks and a third one near the suburban town of Woodstock killed eight people and prompted President Joe Biden and Vice President Kamala Harris to change their plans for a previously scheduled trip to Atlanta. The pair postponed a political event in favor of meeting Friday with Asian American community leaders.

A 21-year-old man is charged with murder in the killings, which took place Tuesday. Six of those killed were women of Asian descent.

During a House Homeland Security committee hearing on Wednesday, DHS Secy. Alejandro Mayorkas confirmed that the FBI is investigating the shooting spree that left 8 dead in Atlanta, Ga.

“Our investigation is looking at everything, so nothing is off the table,” Deputy Atlanta Police Chief Charles Hampton Jr. said at a news conference.

The Cherokee County Sheriff’s Office said it was also investigating whether the killings were hate crimes.

Georgia lawmakers last year passed a hate crimes law that allows additional penalties to be imposed for certain offenses when motivated by a victim’s race, color, religion, national origin, sex, sexual orientation, gender or disability. A hate crime is not a standalone crime under the law, but it can be used to add time to a sentence once someone is convicted of another crime.

Investigators believe the suspect had previously visited two of the Atlanta spas where four of the women were killed, Hampton said.

President Joe Biden said on Wednesday he has been briefed by the director of the FBI and attorney general on the situation in Georgia. Biden said he is waiting for the motivation of the shooting to be determined.

The suspect told police that the attacks were not racially motivated. He claimed to have a sex addiction, and authorities said he apparently lashed out at what he saw as sources of temptation.

The suspect’s statements spurred outrage and widespread skepticism in the Asian American community, which has increasingly been targeted for violence during the coronavirus pandemic. Cherokee County Sheriff’s Office spokesman Capt. Jay Baker also drew criticism for saying the suspected shooter had “a really bad day” and “this is what he did.”

Sheriff Frank Reynolds released a statement Thursday acknowledging that some of Baker’s comments stirred “much debate and anger” and said the agency regrets any “heartache” caused by his words.

“In as much as his words were taken or construed as insensitive or inappropriate, they were not intended to disrespect any of the victims, the gravity of this tragedy or express empathy or sympathy for the suspect,” Reynolds said, adding that Baker “had a difficult task before him, and this was one of the hardest in his 28 years in law enforcement.” 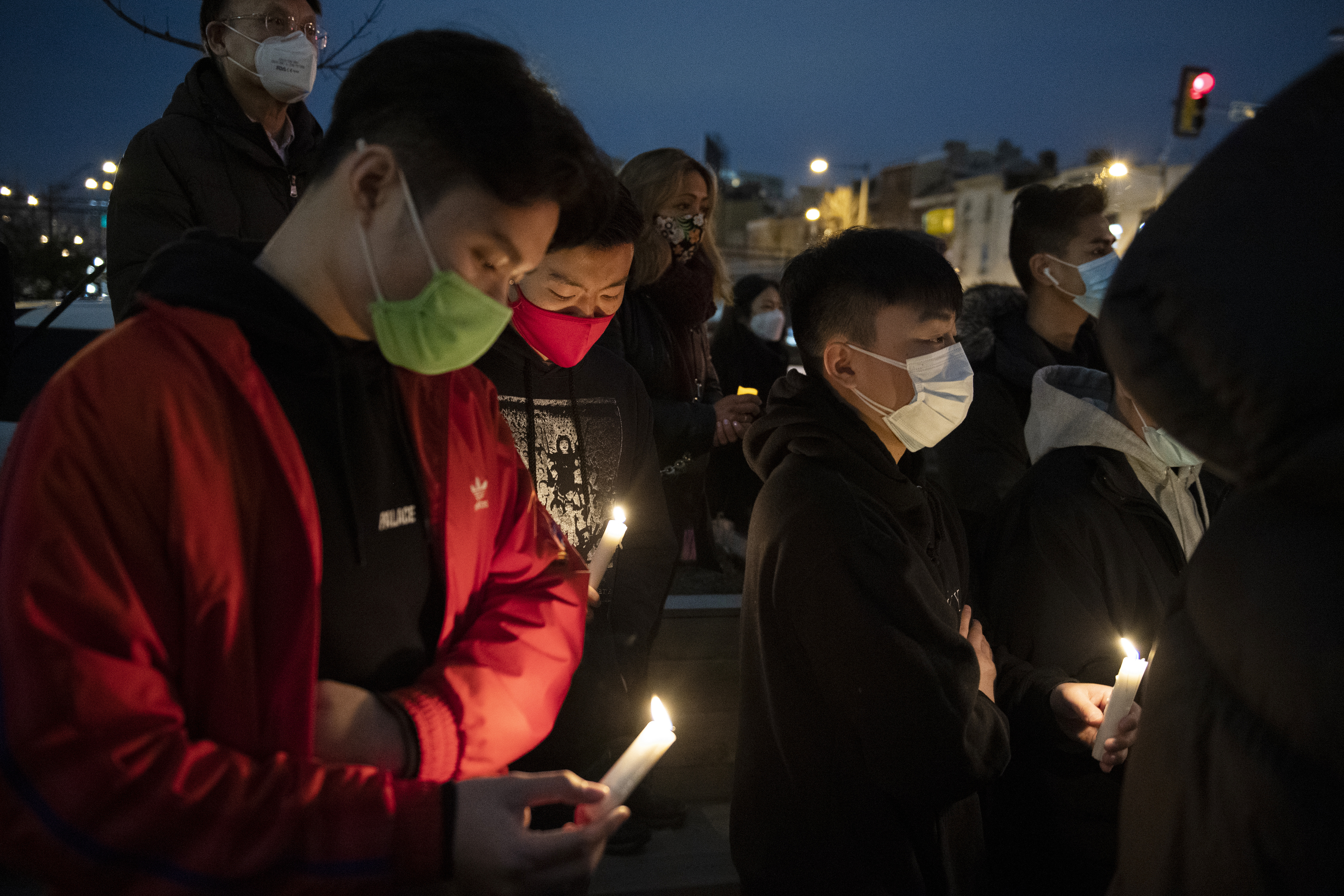 Baker was replaced Thursday as spokesman for the investigation, according to a statement from a county spokeswoman who said she would be handling future media inquiries about the slayings.

The sheriff’s statement did not address a 2020 Facebook post that appeared to have been written by Baker promoting a T-shirt with racist language about China and the coronavirus. Baker has not commented on the post, which was taken down Wednesday.

Lawyer J. Daran Burns issued a statement saying he had been appointed to represent the suspect. He offered condolences to victims’ families and said he was working on the man's behalf “to investigate the facts and circumstances” surrounding the slayings.

Vice President Kamala Harris addressed the media on Wednesday and spoke about the recent mass hotting in Georgia that left 8 people dead.

The suspect waived his right to an initial hearing in Cherokee County Magistrate Court on his lawyer’s advice, the statement said.

The president and vice president were already scheduled to travel to Atlanta to tout the $1.9 trillion COVID-19 relief bill, but the trip took on new meaning after the shootings. The visit also comes amid an intense debate over voter rights in Georgia. Harris is the first vice president of Asian descent.

During the trip, Biden and Harris will instead meet with Asian American leaders to discuss the ongoing threats against the community, meet with other local leaders and visit the Centers for Disease Control and Prevention for an update on the pandemic.

Also Thursday, Biden directed that flags be flown at half-staff through sunset Monday in honor of the dead.

After Rep. Chip Roy, R-TX., called China “patently evil and deserving of condemnation” at a House hearing over a rise in violence against Asian Americans, Rep. Grace Meng, D-N.Y., responded by saying that Republican rhetoric has put a “bulls-eye on the backs of Asian Americans across this country.”

At a congressional hearing on violence against Asian Americans that was scheduled before the shootings, House Judiciary Committee Chairman Jerrold Nadler called Thursday for the government to “investigate and swiftly address” growing tensions but did not call for a specific course of action.

Lawmakers in the House and Senate have introduced legislation that would assign a person at the Justice Department to expedite the review of hate crimes related to COVID-19 and provide additional support to state and local authorities to respond to those crimes. But it is unclear if the bill by Rep. Grace Meng, D-N.Y., and Sen. Mazie Hirono, D-Hawaii, will get a vote.

Testifying at the hearing, Meng urged Democratic leaders to move the legislation and said lawmakers “cannot turn a blind eye” to people who are living in fear.

“Our community is bleeding,” Meng said. “We are in pain. And for the last year, we’ve been screaming out for help.”

Testifying before a U.S. House Judiciary Committee hearing on anti-Asian violence on Thursday, actor Daniel Dae Kim called on Congress to take action. “What happens right now and over the course of the coming months will send a message for generations to come as to whether we matter,” he said.

There was some tension as a Republican on the panel, Texas Rep. Chip Roy, charged that Democrats were trying to control speech.

“When we start policing free speech, we’re doing the very thing that we’re condemning when we condemn what the Chinese Communist Party does to their country,” Roy said. “And that’s exactly where this wants to go.”

Meng responded angrily to Roy’s comments, saying that Republicans “can talk about issues with any other country you want, but you don’t have to do it by putting a bull’s-eye on the back of Asian Americans across this country, on our grandparents, on our kids.”