Numerous studies in recent years have linked bigger wildfires in America to global warming from the burning of coal, oil and gas, especially because climate change has made California much drier

Nikki and Kevin Conant returned to their home in Northern California wine country Wednesday to find only the charred remains of their home and burned pieces of the wine barrels they used to repurpose into custom-made art and furniture.

“It was like a part of me is gone, burned up in the fire. Everything we built here, everything we made here is gone," Nikki Conant said.

The couple, both 52, were preparing to evacuate Sunday when they saw an orange glow in the hills near their Santa Rosa rental home. Within 45 minutes, they could hear the trees crackling and propane tanks exploding as the blaze reached their community. They jumped in their car, and for what seemed like an eternity they were stuck in bumper-to- bumper traffic.

“I thought we were going to burn alive. I really did. It was horrible,” Nikki Conant said. 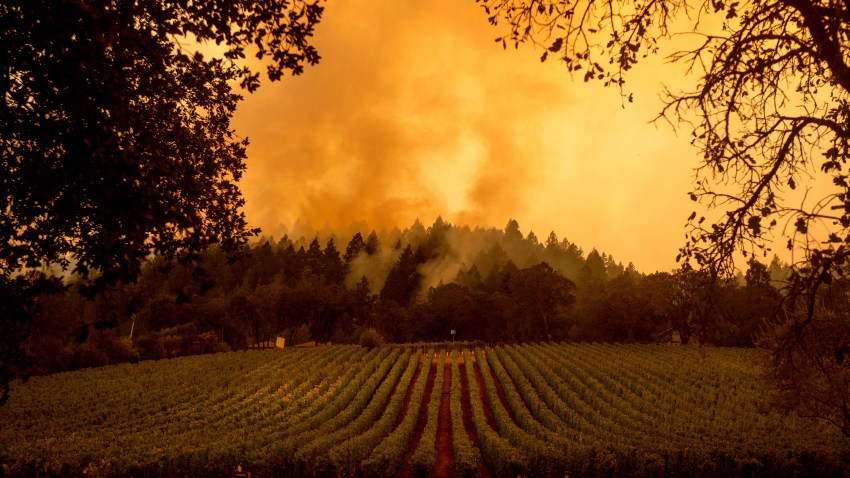 ‘Do Not Wait': Thousands Ordered to Flee as Wildfire Erupts in Wine Country 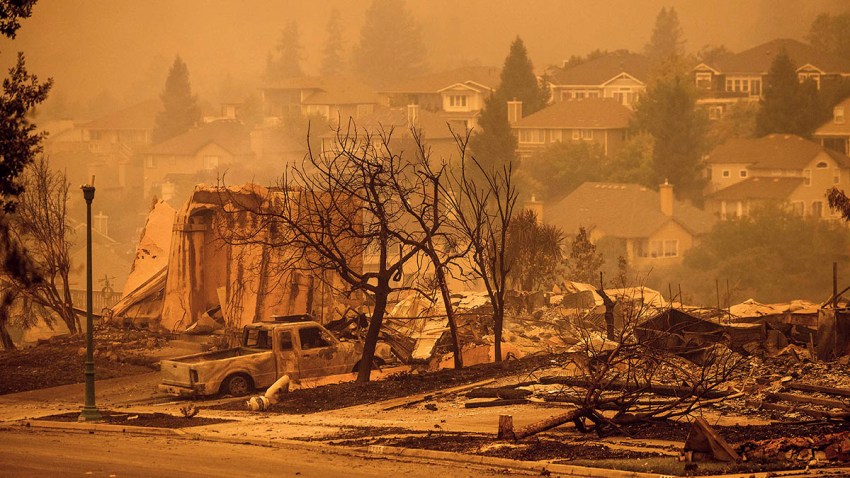 How to Help California Wildfire Victims

Nikki sobbed Wednesday when she spotted her now-burned chicken coop. Her twelve beloved chickens all died in the fire. All the tools for their repurposing business were gone, too.

The Conants are among more than 70,000 people still under evacuation orders in the wine region north of San Francisco where the Glass Fire has incinerated at least 143 homes along with winery installations and other buildings.

Flames were continuing to tear through the region's rolling pastures and tree-dotted hills, toppling renowned wineries and restaurants.

“Every time we try to construct some control lines, the fire is outflanking us, so we have to pull back," Cal Fire Chief Mark Brunton said.

Officials said they were requesting more fire crews to join 2,000 firefighters battling the blaze that has charred 80 square miles with almost no containment.

Pacific Gas & Electric also cut power to another 3,100 customers in Napa County at the request of firefighters, the Santa Rosa Press Democrat reported.

Hot weather and the potential for fire damage could stress power supplies as people switch on their air conditioners. To avoid shortages, the California Independent System Operator, which runs the state's power grid, issued a statewide Flex Alert for 3 p.m. to 10 p.m. Thursday. It urged customers to avoid using large appliances during that time and to keep the thermostat at 78 degrees or above.

A mid-August heat wave strained the grid to the point where Cal ISO ordered utilities to implement brief rolling blackouts for the first time since 2001.

Numerous studies in recent years have linked bigger wildfires in America to global warming from the burning of coal, oil and gas, especially because climate change has made California much drier. A drier California means plants are more flammable.

Some Northern Californians say they are getting fed up with the annual evacuations and fire fears and are thinking of leaving. Despite their latest harrowing experience, the Conants said they plan to stay.

Their landlord already told them the home will be rebuilt and offered them a trailer to stay at on the land while the house is finished, Nikki Conant said.

“This is home,” she said, referring to the Santa Rosa area. “I was born and raised here, my family is here. I don’t have the heart to just give up and leave the area.”

The massive blazes are also becoming harder to fight. On Wednesday, officials said wind-whipped flames led two firefighters to deploy the emergency fire shelters they carry in case of imminent danger from flames

The firefighters were assigned to the Glass Fire in Napa County on Sunday when gusty off-shore winds fanned the fire, forcing them to deploy the shelters after flames overwhelmed them. The firefighters covered themselves on the ground with the space blanket-looking devices. They were not injured, the California Department of Forestry and Fire Protection said.

It’s the third time fire crews have had to deploy their fire shelters this month — a last-resort effort to save their lives that was once uncommon. On Sept. 8, 14 firefighters deployed emergency shelters as flames overtook them and destroyed the fire station they were defending in the Los Padres National Forest. Three firefighters were hospitalized and later released. A day later, a crew fighting a deadly blaze in Butte County was overrun by flames when winds shifted; its members escaped with only minor injuries after deploying emergency shelters.

A man evacuated with severe burns Sunday died at a hospital of his injuries Tuesday, Magrini said. Three others died Sunday.

The deadly blaze that spread to neighboring Tehama County has burned 86 square miles and destroyed 146 buildings, about half of them homes. It was 9% contained.

The Glass and Zogg fires are among nearly 30 wildfires burning in California. Fire-related deaths in California this year total 30.