A rabbi who was among four people held hostage at a Texas synagogue said Sunday that their armed captor grew “increasingly belligerent and threatening” toward the end of the 10-hour standoff, which ended with an FBI SWAT team rushing into the building and the captor's death.

Authorities identified the hostage-taker as a 44-year-old British national, Malik Faisal Akram, who died Saturday night after the last hostages ran out of Congregation Beth Israel around 9 p.m. The FBI said there was no indication that anyone else was involved but had not provided a possible motive. Officials did not release details on how the man died.

The investigation stretched to England, where late Sunday police in Manchester announced that two teenagers were in custody in connection with the standoff. Greater Manchester Police tweeted that counter-terrorism officers had made the arrests but did not say whether the pair faced any charges.

Katie Chaumont, a spokeswoman for the FBI in Dallas, referred questions to police in Manchester.

Rabbi Charlie Cytron-Walker credited security training that his suburban Fort Worth congregation has received over the years for getting him and the other three hostages through the ordeal, which he described as traumatic.

“In the last hour of our hostage crisis, the gunman became increasingly belligerent and threatening,” Cytron-Walker said in a statement. “Without the instruction we received, we would not have been prepared to act and flee when the situation presented itself." 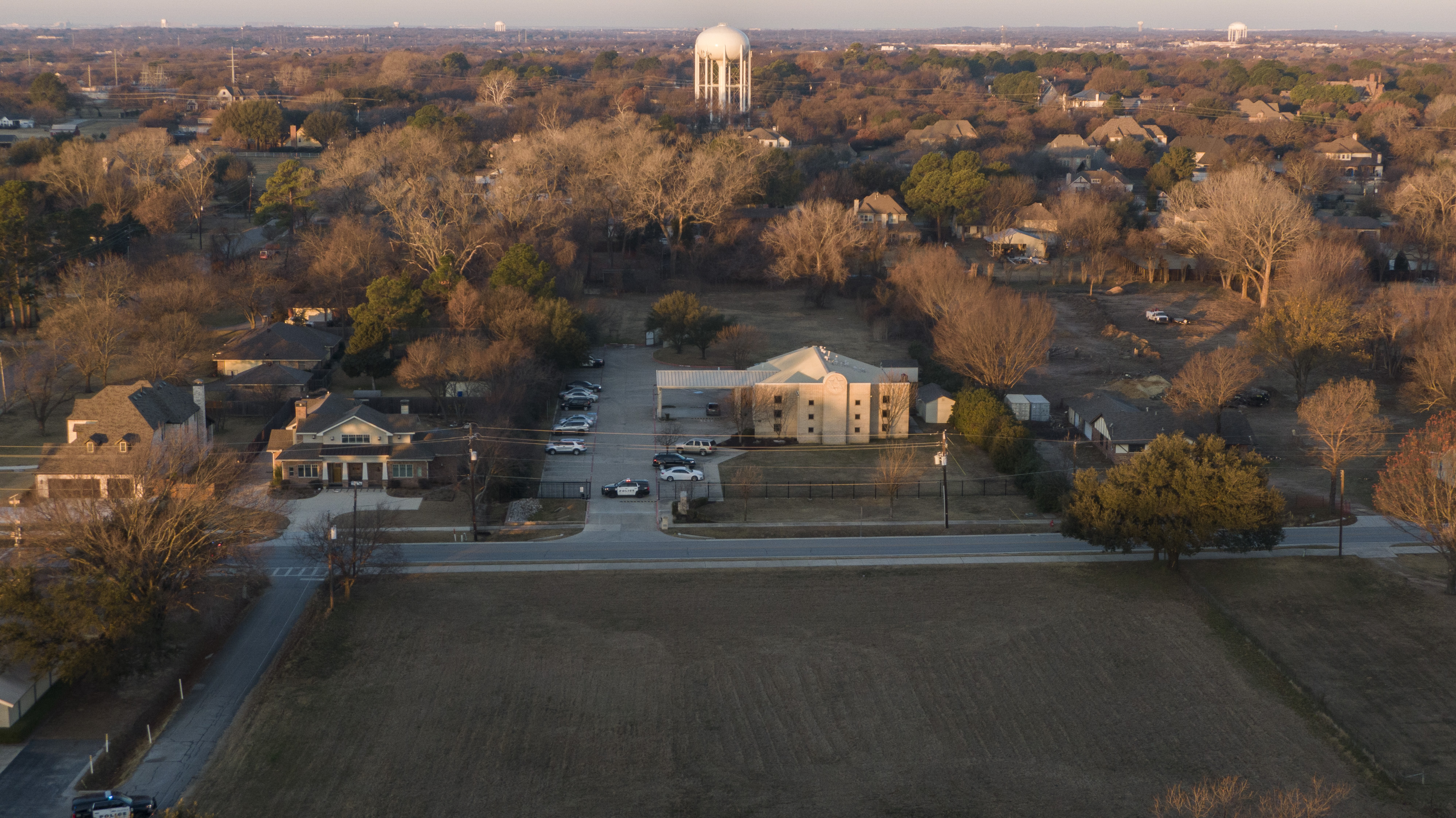 Video from Dallas TV station WFAA showed people running out a door of the synagogue, and then a man holding a gun opening the same door just seconds later before he turned around and closed it. Moments later, several shots and then an explosion could be heard.

The suspect earlier in the day could be heard ranting on a Facebook livestream of the services and demanding the release of Aafia Siddiqui, a Pakistani neuroscientist suspected of having ties to al-Qaida who was convicted of trying to kill U.S. Army officers in Afghanistan.

President Joe Biden, who spoke to reporters in Philadelphia on Sunday, called the episode an act of terror.

“Rest assured, we are focused,” Biden said. “The attorney general is focused and making sure that we deal with these kinds of acts.”

He also said the man allegedly purchased a weapon on the streets, seemingly a reference to federal investigators' belief that the suspect purchased the handgun used in the hostage-taking in a private sale, according to a person familiar with the matter who spoke on condition of anonymity because the investigation is ongoing.

Akram arrived in the U.S. at John F. Kennedy International Airport in New York on a tourist visa about two weeks ago, according to a U.S. official who spoke on condition of anonymity because the information was not intended to be public. London’s Metropolitan Police said in a statement that its counter-terrorism police were liaising with U.S. authorities about the incident.

Police in Colleyville, Texas, said they are "currently conducting SWAT operations" at a synagogue, prompting the evacuation of residents in the area on Saturday afternoon.

FBI Special Agent in Charge Matt DeSarno said the hostage-taker was specifically focused on an issue not directly connected to the Jewish community. It wasn't clear why Akram chose the synagogue, though the prison where Saddiqui is serving her sentence is in Fort Worth.

Michael Finfer, the president of the congregation, said in a statement “there was a one in a million chance that the gunman picked our congregation.”

Authorities said police were first called to the synagogue around 11 a.m. and people were evacuated from the surrounding neighborhood soon afterward.

Saturday's services were being livestreamed on the synagogue's Facebook page for a time. The Fort Worth Star-Telegram reported that an angry man could be heard ranting and talking about religion at times during the livestream, which didn't show what was happening inside the synagogue.

Shortly before 2 p.m., the man said, “You got to do something. I don’t want to see this guy dead.” Moments later, the feed cut out. A spokesperson for Meta Platforms Inc., the corporate successor to Facebook Inc., later confirmed that Facebook had removed the video.

Akram used his phone during the course of negotiations to communicate with people other than law enforcement, according to a law enforcement official who was not authorized to discuss an ongoing investigation by name and spoke on condition of anonymity.

Multiple people heard the hostage-taker refer to Siddiqui as his “sister” on the livestream. But John Floyd, board chair for the Houston chapter of the Council on American-Islamic Relations — the nation’s largest Muslim advocacy group — said Siddiqui’s brother, Mohammad Siddiqui, was not involved.

“We want the assailant to know that his actions are wicked and directly undermine those of us who are seeking justice for Dr. Aafia,” said Floyd, who also is legal counsel for Mohammad Siddiqui.

Texas resident Victoria Francis, who said she watched about an hour of the livestream, said she heard the man rant against America and claim he had a bomb. Biden said there were apparently no explosives, despite the threats.

“He was just all over the map. He was pretty irritated and the more irritated he got, he’d make more threats, like ‘I’m the guy with the bomb. If you make a mistake, this is all on you.’ And he’d laugh at that,” Francis said. “He was clearly in extreme distress.”

Colleyville, a community of about 26,000 people, is about 15 miles (23 kilometers) northeast of Fort Worth. By Sunday morning, the police perimeter around the synagogue had shrunk to half a block in either direction and FBI agents could be seen going in and out of the building. A sign saying “Love” — with the “o” replaced with a Star of David — was planted in a neighbor’s lawn.

Rabbi Charlie Cytron-Walker, who is believed to be one of four people held hostage at Congregation Beth Israel on Saturday, is the synagogue's only rabbi. He's been at the synagogue in Colleyville since 2006. NBC 5's Scott Gordon has more.

Reached outside his home Sunday, Cytron-Walker declined to speak at length about the episode. “It’s a little overwhelming as your can imagine. It was not fun yesterday," he told the AP.

On Sunday, he thanked those who made his rescue possible and voiced appreciation for the love and support his community has received.

Andrew Marc Paley, a Dallas rabbi who was called to the scene to help families and hostages upon their release, said Cytron-Walker acted as a calm and comforting presence. The first hostage was released shortly after 5 p.m. That was around the time food was delivered to those inside the synagogue, but Paley said he did not know if it was part of the negotiations.

“He appeared a little unfazed, actually, but I don't know if that was sort of shock or just the moment," Paley said of the first hostage who was released.

Cytron-Walker said his congregation had received training from local authorities and the Secure Community Network, which was founded in 2004 by a coalition of Jewish organizations and describes itself as “the official safety and security organization” of the Jewish community in North America. Michael Masters, the CEO of the organization, said the congregation had provided security training in August and had not been previously aware of Akram.

The standoff led authorities to tighten security in other places, including New York City, where police said that they increased their presence “at key Jewish institutions” out of an abundance of caution.

Israeli Prime Minister Naftali Bennett said on Twitter that “this event is a stark reminder that antisemitism is still alive and we must continue to fight it worldwide."