As a longtime chairman of the Senate Judiciary Committee, Biden considered 11 nominations

President Joe Biden knows better than anyone the unexpected turns a Supreme Court nomination can take after it lands on Capitol Hill.

As the longtime chairman of the Senate Judiciary Committee, Biden presided over two of the most contentious nominations in modern U.S. history and welcomed the defeat of one of them.

He steered several other candidates to confirmation but was confounded by allegations of sexual harassment against future Justice Clarence Thomas by law professor Anita Hill.

Biden has been involved in the process for so long that he's come full circle with Justice Stephen Breyer — from leading Breyer's Senate confirmation hearing and voting to put him on the court to recently accepting Breyer's retirement after 28 years on the bench and naming a replacement. Biden and Breyer also worked together when Breyer was the committee's chief counsel.

“We were joking with one another when he walked in,” Biden said at Breyer's retirement announcement in January. “Did we ever think that he would have served decades on the court and I’d be president of the United States on the day he came in to retire?”

Biden developed his knowledge of the Supreme Court nomination process during his 36-year Senate career, particularly the 17 years he spent as chairman or vice chairman of the Judiciary Committee, which reviews every candidate for the federal judiciary.

White House officials highlighted that experience as Biden deliberated over a small group of candidates, ending with his nomination of federal judge Ketanji Brown Jackson. Jackson began meeting with senators this week.

“Obama picked him for experience in a number of areas,” Ted Kaufman, a longtime member of Biden's inner circle, said in an interview. “This is one of those areas.”

Sen. Chuck Grassley, R-Iowa, a veteran Judiciary Committee member who served with Biden, said the president has a “great appreciation of what senators must do, because he’s done it.”

After four years in the Senate, Biden was assigned to the Judiciary panel in 1977. He took part in confirmation hearings for Supreme Court nominees Sandra Day O’Connor in 1981 and Antonin Scalia in 1986, both nominated by President Ronald Reagan. He voted to put both on the court.

Biden also participated in the 1986 hearing to elevate Justice William Rehnquist to the position of chief justice of the United States. He voted against Rehnquist.

On Friday, Biden delivered on his campaign promise to nominate the first Black woman to the Supreme Court.

Biden became chairman in 1987, but he wanted more after 14 years in the Senate. That June, he announced his candidacy for the 1988 Democratic presidential nomination. Then Supreme Court Justice Lewis Powell announced his retirement.

Just like that, Biden would preside over the first of five Supreme Court confirmation hearings.

To replace Powell, Reagan tapped Robert Bork, a conservative federal appeals court judge who would have shifted the ideological balance of the nine-member high court firmly to the right. Biden opposed the nomination, differing with Bork over his views on privacy and civil rights.

“I knew enough about Bork to know it would be nearly impossible for him to convince me that he was right for the court,” Biden wrote in his 2007 memoir.

He tried juggling the competing demands of his White House ambitions and preparing for Bork's hearing. But after the campaign was engulfed by allegations that he had plagiarized in law school and had not credited a British lawmaker whose remarks he used in his own stump speech, Biden dropped out of the race to focus on keeping Bork off the court, he wrote.

After a contentious hearing that foreshadowed the intense scrutiny that would await future Supreme Court nominees, the committee forwarded Bork’s nomination to the full Senate with an unfavorable recommendation, effectively dooming the judge.

A bipartisan majority of senators had come to oppose Bork, who refused to withdraw and insisted on a floor vote. The Senate rejected him 58-42.

“There's a guy sitting at home whose whole life has been directed toward being on the Supreme Court,” he told his Senate office staff after seeing they had champagne chilling on ice after the vote. “Imagine how he feels when that last vote's been tallied, when he's realized he lost.”

Biden earned bipartisan praise for the way he handled the hearing; Bork quit being a judge and began giving speeches accusing the committee of mishandling his nomination.

Biden led the hearing for judge David Souter, nominated to the high court by Republican President George H.W. Bush in 1990, and was among senators voting 90-9 to confirm him.

But tensions flared the following year after Bush chose Thomas, a relatively new and conservative Black federal appeals court judge, to replace retiring justice Thurgood Marshall, a lawyer and civil rights activist who was the first Black person to sit on the Supreme Court.

"I think we all understand that people in this country don't experience life or law in the same way," says Tiffany Jeffers, a professor at Georgetown University's law school. With the nomination of Ketanji Brown Jackson, a Black woman, to the Supreme Court, the historically white court might hear new perspectives, Jeffers says. Jackson, a former clerk for retiring Justice Stephen Breyer, is known for her common sense and deep belief in the U.S. Constitution.

Some had accused Bush of playing politics with the nomination by choosing Thomas, who was opposed by liberals. But some of Thomas' critics didn't want to be seen as being too tough on a Black man.

Committee hearings opened in September 1991, focused on Thomas' legal views. But by then, the Democratic committee staff had begun researching a tip that Thomas allegedly had sexually harassed women he had worked with before he became a judge.

Hill, who had worked with Thomas at the Education Department and the Equal Employment Opportunity Commission, had shared her story privately with the committee.

But after the explosive contents of her confidential statement leaked to the news media two days days before the Senate was expected to vote to confirm Thomas, Biden came under pressure to reopen the hearings so Hill could testify publicly. Thomas angrily denied her allegations, and Biden refused to allow other women who would have corroborated Hill's claims to also testify in public.

The Senate confirmed Thomas by a vote of 52-48, with Biden against him.

Where Biden was praised for the Bork hearing, he was criticized over Thomas'. Women’s groups and women in Congress accused him of not treating Hill’s sexual harassment allegations seriously enough while Thomas denounced the process as a “high-tech lynching for uppity Blacks.”

Biden went on to chair confirmation hearings for Democratic Supreme Court nominees Ruth Bader Ginsburg in 1993 and Breyer in 1994. He voted to confirm both.

He was on the committee in 2005 but no longer chairman when now-Chief Justice John Roberts was confirmed to the court, and in 2006 when Samuel Alito became a justice. Both were nominated by Republican President George W. Bush. Biden voted against both. 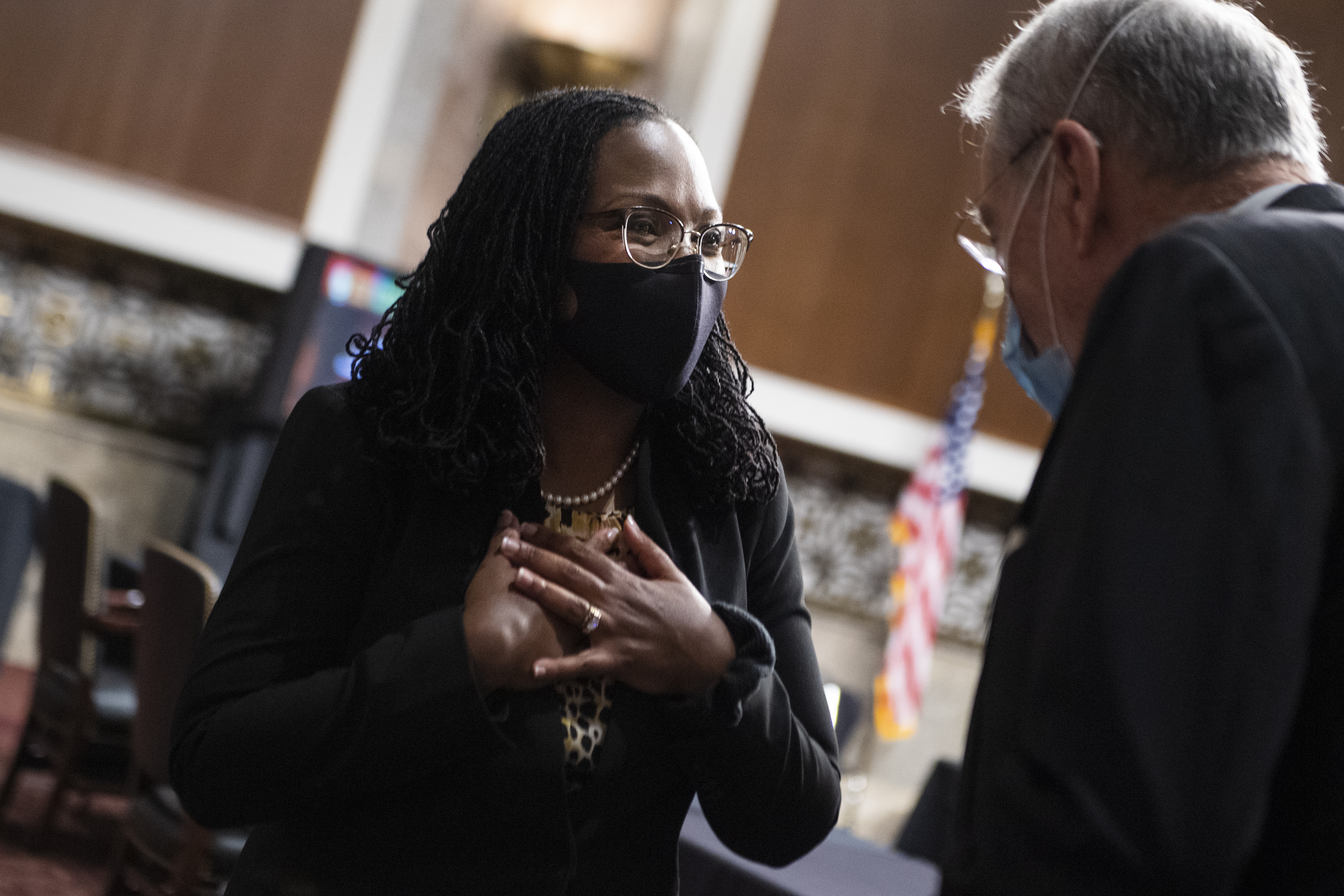 Democrats See ‘No Reason to Wait' on Supreme Court Vote 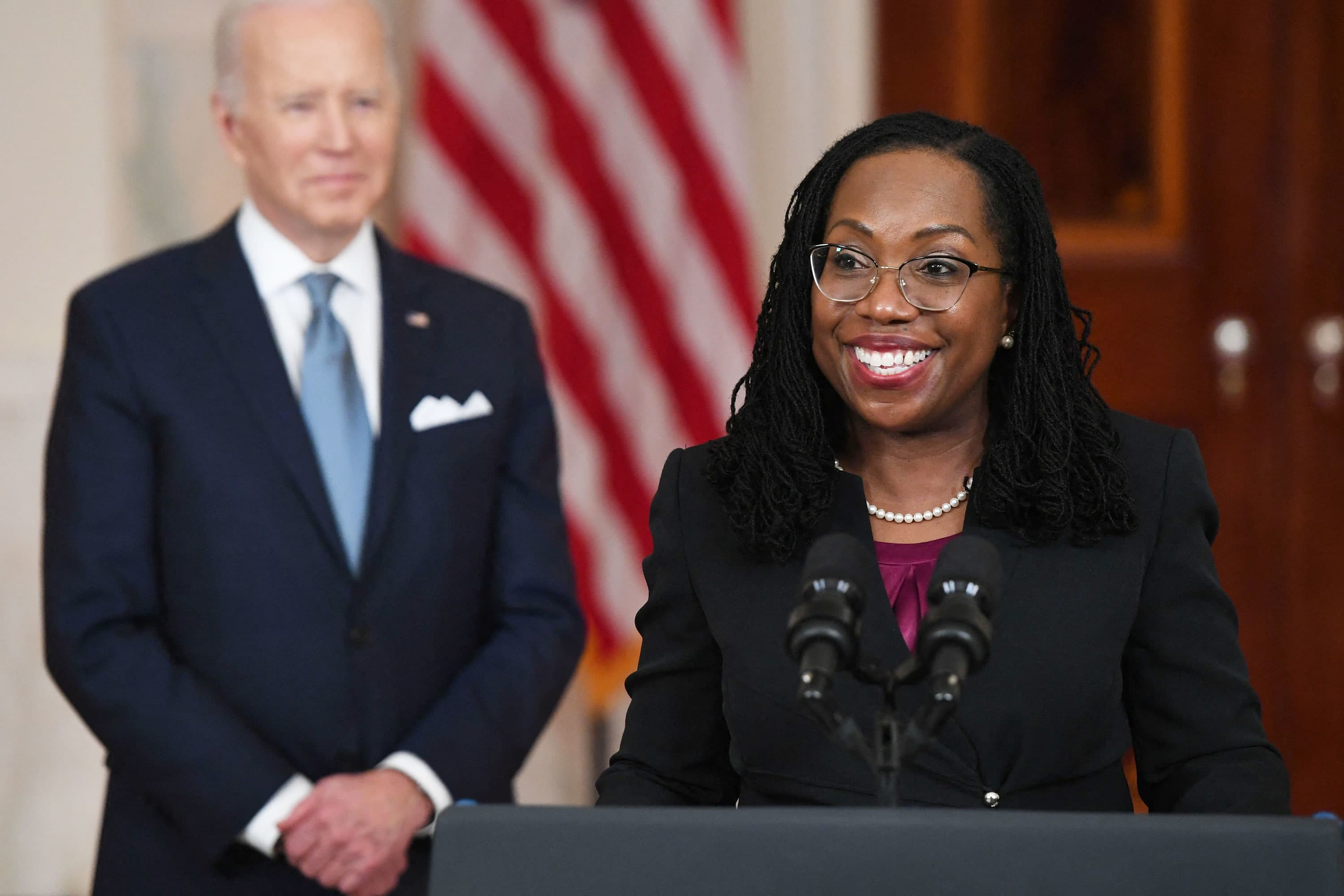 Years later as he considered running for president a third time, Biden said he regretted his decision not to let the other women testify in public during Thomas' hearing, as well as Hill’s treatment by the all-white-male committee.

“Anita Hill was vilified when she came forward, by a lot of my colleagues,” Biden said in 2018 during an interview on NBC’s “Today." “I wish I could have done more to prevent those questions and the way they asked them.”

Hill told The Associated Press in an interview last year for her new book that the hearings had harmed not only herself and her family, but also had hurt “any people, any woman, any person who wants to come forward and complain about abuse.”

In 2019, before announcing his candidacy for president, Biden telephoned Hill and apologized. Hill said the conversation left her feeling “deeply unsatisfied.”