Biden to Propose Free Preschool in Speech to Congress

President Joe Biden will call for free preschool for all three- and four-year-old children, a $200 billion investment to be rolled out as part of his sweeping American Families Plan being unveiled Wednesday in an address to Congress.

The administration said the historic investment would benefit 5 million children and save the average family $13,000. It calls for providing federal funds to help the states offer preschool, with teachers and other employees earning $15 an hour.

“These investments will give American children a head start and pave the way for the best-educated generation in U.S. history,” the administration said.

The new details are part of Biden's $1 trillion-plus package, an ambitious next phase of his massive infrastructure investment program, this one focused on so-called human infrastructure — child care, health care, education and other core aspects of the household architecture that undergird everyday life for countless Americans.

The Agriculture Department told NBC News that the Biden administration is poised to announce the largest summer food program in U.S. history, which will feed 30 million low-income children.

Together with Biden's American Jobs Plan, a $2.3 trillion infrastructure investment to be funded by a corporate tax hike, they add up a whopping $4 trillion effort to fulfill his campaign vow to Build Back Better. The American Families Plan would be paid for by hiking taxes on the wealthiest 1% of Americans, in keeping with the president’s vow not to raise taxes on those making less than $400,000 a year.

Ahead of Wednesday's speech, lawmakers have been pushing to make sure key priorities are included.

A group of leading centrist and progressive Democrats met late Tuesday with the White House to discuss its priority of making permanent the Child Tax Credit, which was increased to as much as $300 a month as part of a COVID-19 relief package. Right now, that benefit expires in 2022 and Biden has suggested extending it to 2025.

“We’re hopeful," said Sen. Sherrod Brown, D-Ohio, the chairman of the Banking Committee and advocate for a permanent child tax credit. "We want it to be permanent because it’s so important for so many people’s lives.”

House Speaker Nancy Pelosi appears to have secured one top priority for Democrats, lowering the cost of buying health insurance under the Affordable Care Act.

President Joe Biden and Vice President Kamala Harris discuss the American Relief Act and how it will help all Americans.

Biden's plan is expected to extend the enhanced health insurance subsidies that had been approved as part of COVID-19 relief, rather than allowing them to expire in 2022, according to a Democratic aide granted anonymity to discuss private conversations.

But another key priority of Pelosi and Democrats — lowering prescription drug costs — is not expected to be in the package, the aide said.

Also unlikely to make the final draft is a push from progressives led by Sen. Bernie Sanders of Vermont to reduce the Medicare eligibility age, which is now set at 65, and expand Medicare’s benefits to include access to dental, vision and hearing aid care for seniors.

Sanders vowed Tuesday to add those provisions once Congress begins drafting the legislation.

“The bill that we’re going to be writing will include negotiations with pharmaceutical industry to lower drug prices raising substantial sums of money, and using that to expand Medicare," Sanders said at the Capitol. 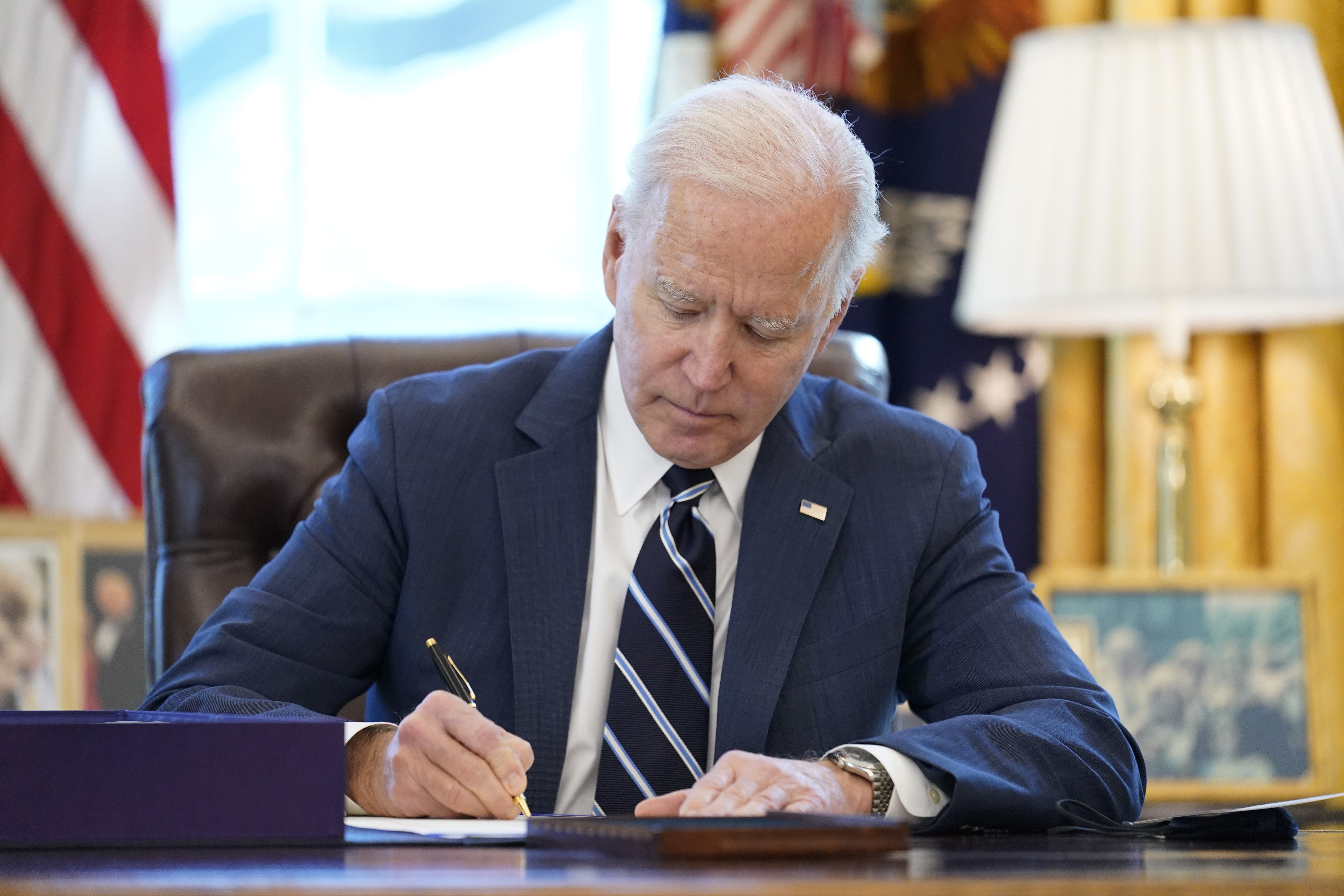 ‘Go Get the Shot': Biden Highlights Path Back to Normal

The president’s speech and the rollout of the American Families Plan come as Biden is marking his first 100 days in the White House, a rare moment for congressional action. Democrats narrowly control the House and Senate, giving the president’s party the full sweep of power for the first time in a decade.

While Biden is determined to reach out for bipartisanship, Republicans in Congress have largely panned his proposals as big government spending and vowed to oppose them.

Senate Republican leader Mitch McConnell called Biden's administration the “bait and switch” presidency for talking up bipartisanship but then leaving Republicans behind to negotiate legislation only with Democrats.

"President Biden ran as a moderate but I’m hard pressed to think of anything at all that he’s done so far that would indicate some degree of moderation,” McConnell said Tuesday.

But Biden's Democratic allies in Congress are just as determined to ensure to seize this rare alignment of political power to deliver on long-sought priorities.

“What I’d like to hear him talk about is the importance of investing in the American people and in our infrastructure,” said Sen. Michael Bennet, D-Colo. “It’s been decades since we’ve done that as a country."

Republicans complain that the White House is stretching the traditional definition of infrastructure beyond roads and bridges to include electric vehicle charging stations, veterans hospitals, child care centers and other developments.

But Democrats counter that times have changed. “Childcare is infrastructure,” Sen. Elizabeth Warren, D-Mass., said at a press conference. “Infrastructure is all about people being able to get to work — roads, bridges, communications — and childcare is part of that.”

The White House has portrayed its plan as a Robin Hood-style effort to tax the rich in order to spend on benefits for the middle class and poor.

It’s an argument that the hundreds of billions of dollars controlled by the wealthiest sliver of the country would lead to better results for the country if they were distributed instead to families.

In addition to free preschool, the American Families Plan would extend an expanded child tax credit through 2025, giving parents monthly payments of at least $250 per child.

The plan would also provide free community college and paid family leave, among other benefits.

Funding the initiative would be a tax increase on the extremely rich, most notably a near doubling of the capital gains tax rate on incomes above $1 million to 39.6%.

Similarly, the top income tax bracket for those households earning beyond $400,000 is expected to revert to 39.6%, according to a Democratic aide granted anonymity to discuss the planning. That had been the top rate before the 2017 GOP tax overhaul approved by Donald Trump.

Brian Deese, director of the White House National Economic Council, said revenue from the capital gains tax "would help invest directly in our kids and our families and our future economic competitiveness.”

Republican leaders have said they are unwilling to undo the 2017 tax law, their signature achievement of the Trump presidency, to pay for what they view as big spending by Democrats.

No Republicans voted for Biden's coronavirus rescue plan, which was signed into law last month. Last week, Republican senators proposed an alternative infrastructure plan focused on more traditional highway and bridge investments that would be one-fourth the cost, paid for by tolls and other user fees.