By Manuel Rueda, Diane Jeantet, Franklin Briceno and Gonzalo Solano • Published on February 14, 2020 at 12:19 am

Roman Catholic priests, deacons and bishops across the Amazon voiced surprise, resignation and reluctant acceptance of Pope Francis' refusal to allow married men to be ordained priests, lamenting that their faithful will continue to be deprived of Mass and subject to competing evangelical churches that have made impressive inroads in the region.

Francis sidestepped the issue in his big document on the Amazon released Wednesday. While he officially presented recommendations by the Amazon's church hierarchy to consider ordaining married permanent deacons, he refused to endorse the idea as a way to address an acute priest shortage in the region, where the faithful can go months or years without a Mass.

That didn't rule out the proposal entirely, but it certainly didn't embrace it, as many had hoped Francis would after a three-week synod last October at the Vatican devoted to the plight of the world's largest rain forest and its indigenous peoples.

Church leaders in the five countries that are home to the Amazon basin share their thoughts about the pope's message.

Ferney Pereira, a 30-year-old deacon from the Ticuna indigenous group, was surprised Francis didn’t explicitly address the issue of married priests. Currently, priests find their way to his village -- accessible only by boat on the Amazon River and home to some 1,000 people -- just once every several months.

Meantime, neighboring villages are visited often by evangelical missionaries and Jehovah’s Witnesses, who have preached against indigenous rituals and managed to convert some people.

"If there are no priests the people are also more tempted to join the evangelical churches," Pereira said.

A BISHOP IN BRAZIL

Dom Erwin Kräutler, an Austrian bishop who has spent the past 55 years in Brazil’s Amazon, has long defended the view that married men should be eligible for priesthood. Now based in Altamira in Para state, he says there are 30 priests for a diocese the size of Germany and about 800 far-flung communities.

"We cannot say that our church, in terms of priests, is present in the community," Kräutler told AP. "They're always traveling from one community to another."

There are few viable transport options. Just a few days ago, Kräutler, 80, visited a community more than 1,000 kilometers (about 625 miles) from Altamira. He traveled by car.

Itinerant priests don’t have the same relationship with local communities as those who live there, such as evangelical pastors, he said. Faced with the rapid expansion of evangelicals in Brazil, bishops in the region realized the church needs a deeper bond, or, as Kräutler calls it, an "Amazonian face."

In the 1970’s, Brazil was more than 90% Catholic, according to the Pew Research Center. That number has plunged as evangelical faiths gained ground and, in the most recent census of 2010, was below 65%. A December survey by pollster Datafolhaof almost 3,000 Brazilians found just half declared themselves Catholic, and some experts say Catholicism will be overtaken by evangelical faiths in just over a decade. 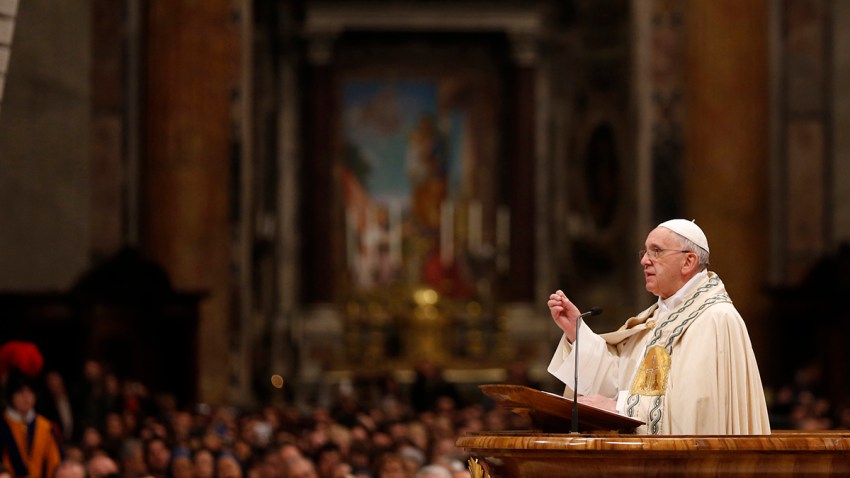 Omar Mateo, a priest at the Señor de los Milagros Sanctuary, said he attended a meeting with the archbishop of nearby Guayaquil on Wednesday to analyze how many permanent deacons there are in each of Ecuador’s Amazon vicariates. Five of six have none.

That finding underscored that the problem isn’t prohibiting married deacons from becoming priests, but a widespread lack of people pursuing church leadership roles in the Amazon. Pope Francis, in a footnote to his "Beloved Amazon" letter, noted that local missionaries tend to go to Europe or the U.S. rather than remain in their own vicariates in the Amazon.

"Where are we going to get the deacons if there aren’t any?" Mateo said. "Maintaining a priest is already difficult in the Amazon. How would we proceed with the family of ordained deacons? Who will take charge of maintaining the family, giving education?"

Only 29% of Catholics in Ecuador agreed that priests should be allowed to marry, according to a separate 2013-2014 survey by Pew. That was the least among countries with Amazon rainforest after Peru, where 28% backed the proposal. Support was highest in Brazil, at 56%.

"With time, (the church) will have to give in," Yésica Patiachi, a teacher from the Harakbut indigenous ethnic group, said about allowing married priests in the Amazon.

The Harakbut live in Peru’s remote Amazon, and was saved from abusive rubber tappers by Spanish missionaries who arrived in the early 20th century. There have been strong ties between the Harakbut and the Catholic Church ever since. When Francis visited the area early last year, Patiachi delivered an emotional speech to him, and in October traveled to the Vatican herself.

"During my visit to Rome, one afternoon I saw how in some churches a priest gives Mass to just three people," Patiachi said by phone from the Mother of God region. "In the Amazon, when a priest arrives after several months absence, hundreds of people congregate."

The conservative wing of the church exerted "enormous pressure" on the pope to avoid changing its centuries-old tradition of celibacy, she said. Still, she believes he has opened a path to discuss topics that were previously ignored, including defense of the Amazon forest and its people.

A BISHOP IN BOLIVIA

Bishops in Bolivia have clashed with the nation's government over policies that encourage settlers to slash and burn the forest to make way for cattle and cash crops.

Bishop Eugenio Coter of the Pando vicariate praised Pope Francis' letter for focus on the environment that continues to be "preyed upon." He said the document highlights the plight of indigenous people and others trying to set up sustainable production.

But Coter criticized the pope for ignoring the proposal to ordain married men. His vicariate in northern Bolivia has 10 priests to minister to 270,000 people spread across an area the size of Portugal. It is attempting to train lay village members to conduct religious ceremonies, and it also relies on nuns to conduct baptisms. "We were hoping to find a new way to offer the Eucharist to people in remote areas," said Coter. "That door hasn’t been open for the moment, but I don’t think it has been permanently shut."