A mother and grandmother said that despite planning in advance for their students' transportation needs, the buses either never came or refused to take them

A high school freshman and a 3-year-old child, both students with special needs, were left without rides to school in a continuation of the school bus problems plaguing some Stafford County families.

Stafford County’s school transportation problems, which the superintendent blames in part on a bus driver shortage, have affected hundreds of children. Just last week, dozens of kids were left behind at bus stops or left without a ride home after school.

On Aug. 10, 3-year-old Wyatt was ready to return to school at his Head Start program. 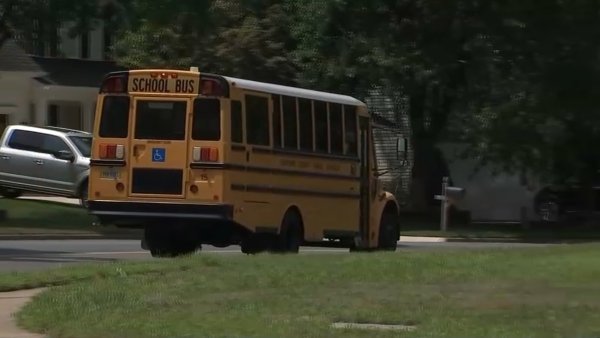 ‘I Couldn't Feel My Face': Boy Taken to Hospital After Trip on Hot School Bus

“[He was] really excited and he was strapped into his special needs stroller and had his favorite little car in his hand,” his grandmother, Kayla Finlay, said.

Wyatt is non-verbal and has cerebral palsy and epilepsy, among other challenges. The day he was supposed to leave for school, the bus he needed with a lift never came.

“He was having meltdown after meltdown. He was frustrated, didn’t understand," Finlay said.

As of Tuesday, the bus still hasn’t come to pick up Wyatt, and he hasn’t made it to school.

Wendie Palermo is another parent waiting for the transportation department to get things right for her son, a freshman.

Last week, her son did not receive a bus assignment.

"I ended up having to drive him to school the whole entire week," Palermo said, even though a plan for him was put in place long before school started.

When he finally did get a bus number for the ride home from Stafford High School on Monday, the driver refused to let him board.

“[The driver] basically told him that he didn’t belong on her bus… [She] left him out in the rain standing at the door,”  Palermo said. “He was soaking wet. His backpack was all wet, his computer, everything. And he was just, he was upset.”

Wendie’s son has a new bus number now, but both she and Finlay said they are losing hope.

Some Stafford County public school students waited for buses that never showed up, sometimes for hours, the first two days back to school. News4's Julie Carey spoke with the superintendent about the cause of the issue.

"I firmly believe the special needs children definitely need to have top priority when it comes to bus assignments and getting them where they need to be, when they’re supposed to be there," Palermo said.

Finlay pointed out that the emotional toll these incidents take on children and their parents is great.

“This is really a tragedy that this happened even one time to one child, let alone multiple times to how many other children that we just haven’t heard about yet," she said.

A Stafford County Public Schools spokeswoman said the Department of Special Education and Student Services is reaching out to both families to give them bus numbers to and from school. The school district is also urging anyone interested in becoming a bus driver to contact them.