Some DC Neighbors Concerned About Justice for J6 Rally

Some neighbors of the U.S. Capitol are concerned about what the Justice for J6 rally could mean for them Saturday.

The U.S. Capitol is surrounded like a fortress for the demonstration in support of the hundreds of people arrested and charged in connection with the Jan. 6 riot at the Capitol.

“I feel really frustrated,” said Dorian Bean-Lipscombe, who owns a tuxedo shop near the Capitol. 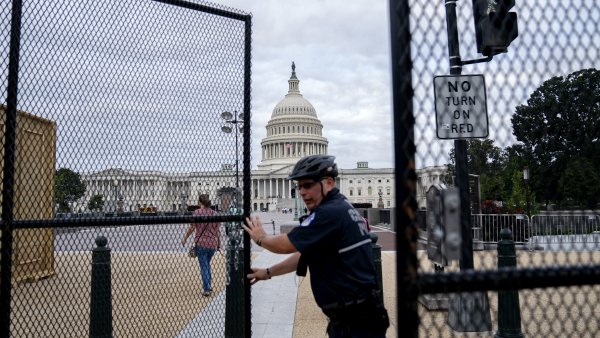 Justice for J6 Rally in DC This Weekend: What to Know

Crews Install Fencing Around US Capitol Ahead of Saturday Rally

“I do not know if they’re going to shut down our street or evacuate our businesses to protect us,” she said.

Attendance is not expected to be as large as the Jan. 6 insurrection, and Justice for J6 organizers say the intend it to be a peaceful demonstration, but Capitol Police, D.C. police, the U.S. Secret Service and other law enforcement agencies are not taking any chances. They’re closely monitoring intelligence that suggests there could be violent clashes between those attending the rally and counterdemonstrators.

The National Guard is on standby at the DC Armory to respond if needed.

“I was here on the 6th, and after then I think that it’s necessary,” he said.

Historic Black churches in the area have been targeted in the past. Terry Lynch, executive director of the Downtown Cluster of Congregations, said they will get extra attention this time.

“Unfortunately, recent events over the last year show that both houses of worship and minority locations were targets,” Lynch said.