Tarrio posted about burning the banner on social media and in comments on media outlets, prosecutors said

A leader of the far-right extremist group the Proud Boys pleaded guilty Monday in the burning of a Black Lives Matter banner taken from a church in downtown D.C.

The evening of Dec. 12, a group affiliated with the Proud Boys including 37-year-old Henry “Enrique” Tarrio of Miami took the banner from Asbury United Methodist Church at 11th and K streets Northwest, then set fire to it at the intersection of 11th and E streets Northwest, according to the U.S. Attorney’s Office for the District of Columbia.

D.C. police released surveillance images of the people who tore down and burned a Black Lives Matter sign from the front of the Asbury United Methodist Church at 11th and K streets NW.

Tarrio posted about burning the banner on social media and in comments on media outlets, prosecutors said.

Tarrio was arrested Jan. 4 after returning to D.C., prosecutors said. A search of Tarrio during the arrest found he had two high-capacity firearm magazines with the insignia of the Proud Boys. 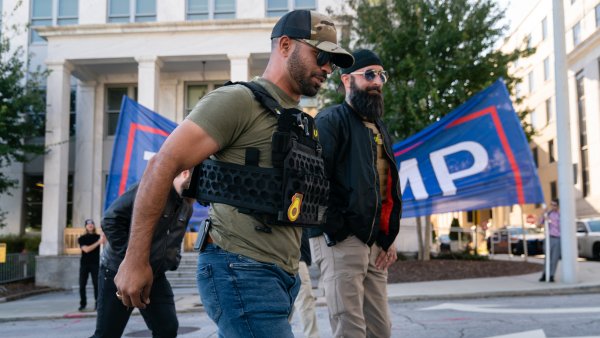 Tarrio pleaded guilty in Superior Court to one count of destruction of property and one count of attempted possession of a large-capacity ammunition feeding device.

Sentencing was scheduled for Aug. 23. Each count carries a maximum penalty of 180 days in prison and a $1,000 fine.