“A derailment due to wheel movement could be catastrophic,” according to the safety alert

The National Transportation Safety Board on Wednesday issued a safety alert to subway systems and commuter railroads across the country over a wheelset problem that led to a derailment in D.C., saying the defect is difficult to detect and potentially devastating.

The investigative agency released a preliminary report of its ongoing probe into the Oct. 12 accident involving the Washington subway system that ruled out other factors such as speed.

The NTSB said the flaw in the rail car’s wheel and axle assembly is “not easily identifiable” with a routine visual check, and urged transit agencies to comply with a recent Federal Transit Administration directive to conduct inspections for misaligned wheels — something that NTSB Chair Jennifer Homendy urged early in the investigation. The NTSB broadened its alert to include commuter rail, which isn’t fully covered under the FTA order. 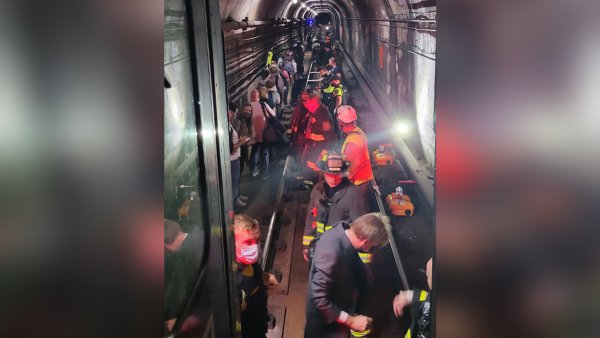 Several transit and rail agencies have said they have made checks and the problem does not appear to apply to them, but NTSB underscored the need for vigilance.

“A derailment due to wheel movement could be catastrophic,” according to the safety alert.

The bulk of Washington’s Metro fleet has been suspended from service since mid-October after a train car slipped off the tracks on the Blue Line near Arlington National Cemetery. According to NTSB's report on Wednesday, the car derailed and then reconnected with the rails by itself on two occasions during that trip, before derailing a third time. Some passengers were trapped in a tunnel in a dark train car and had to be evacuated on foot.

Following that mishap, the NTSB found chronic problems in which the wheels on Metro’s 7000-series line, its newest rail car, spread too wide on the axles, allowing the carriage to slip off the tracks. The issue had been apparent to the Washington Metropolitan Area Transit Authority since 2017, but neither the NTSB nor the WMATA board had been informed. At the place of derailment, the NTSB said the maximum authorized speed was 59 miles per hour. Preliminary data from an onboard event recorder showed the train speed was below that at about 33 mph.

“The NTSB is concerned that car 7200 operated with a wheelset that did not meet specifications for an undetermined time as the car derailed three times on the day of the accident ... without any noticeable indication of the problem to alert the train operator,” the alert said. “The derailment likely occurred due to movement of the wheel on its axle, which should never happen.”

Washington Metro is expected to operate sharply reduced service at least through the end of the year.

“The safety alert identifies the issue of wheelset movement on transit railcars and commuter railroads as a serious problem,” said Robert Hall, director of NTSB’s office of railroad, pipeline and hazardous materials investigations. “As we continue to conduct the investigation of this derailment, it is imperative that the safety issues identified are addressed immediately to protect the American public traveling daily on our transit system.”

The agency said its investigation will examine whether the flawed wheelsets were a result of a design defect or assembly error, evaluate the response from rail traffic controllers and try to identify if there are similar problems in other types of rail cars.

The safety concerns come as public transit agencies work to win back passengers and build out expanded transportation routes under President Joe Biden's new infrastructure law after a crushing year of drained ridership due to the COVID-19 pandemic. In Washington, overall rider numbers remain at about 30% of pre-pandemic levels but were expected to increase with office reopenings and renewed tourism.