Anthony Robinson is suspected in the deaths of Allene Elizabeth Redmon, Tonita Lorice Smith and Cheyenne Brown. A fourth person is still unidentified

Police in Fairfax County, Virginia, say the discovery of four bodies in two parts of the state are the work of a Washington, D.C., man they call “The Shopping Cart Killer.” Authorities say he brutalized and killed women he met on dating sites and used a shopping cart to transport their bodies.

Officials say there could be more victims in the D.C. area and beyond.

“The good thing is he’s in custody. The challenge that remains is identifying other victims,” Fairfax County Police Chief Kevin Davis said.

Fairfax County police believe suspect Anthony Robinson, 35, is a serial killer, they said at a news conference Friday. Robinson was taken into custody in Rockingham County last month and charged in the deaths of two women.

Police in Fairfax County, Virginia, say the discovery of four bodies in two parts of the state are the work of a Washington, D.C., man they call “The Shopping Cart Killer.” News4's Darcy Spencer reports.

Police work and the discovery of two more bodies near a small motel in the Alexandria section of Fairfax County on Wednesday revealed what officials believe is the rare case of a serial killer.

According to an investigation by police in Fairfax County, D.C. and Harrisonburg, Robinson met women online, went to motels with them, killed them and then transported their remains in shopping carts.

Two Virginia women were identified as victims, a D.C. woman is “tentatively” believed to be a third victim and a fourth person was not identified.

The bodies of Allene Elizabeth Redmon and Tonita Lorice Smith were found in an open lot in Harrisonburg on Nov. 23, the city’s police chief said. Redmon was 54 and lived in that city. Smith was 39 and lived in Charlottesville.

Police preliminarily believe that Cheyenne Brown, a 29-year-old woman who went missing from Southeast D.C. on Sept. 30, is among the victims. Her family identified her on the basis of a distinctive tattoo, police said.

Brown was the mother of a 7-year-old boy and was pregnant, her family said in an interview with News4 earlier this month, desperate for answers about her disappearance.

A family member of Brown said he believes he saw Robinson in her home days before her disappearance.

Fairfax County police found two sets of human remains on Wednesday near the Moon Inn Hotel on Route 1, just south of the Capital Beltway. Investigators believe one set of remains found in a container near a shopping cart were Brown’s. The other person was not identified. Police said they have leads related to a missing person who was last seen in the area.

Police tell News4 that Robinson could also be connected to the death of 48-year-old Stephanie Harrison.

Her sister, Joei Harrison, says Stephanie flew from California to D.C. to go sightseeing. She checked into the Moon Inn in Fairfax County in August and then disappeared. 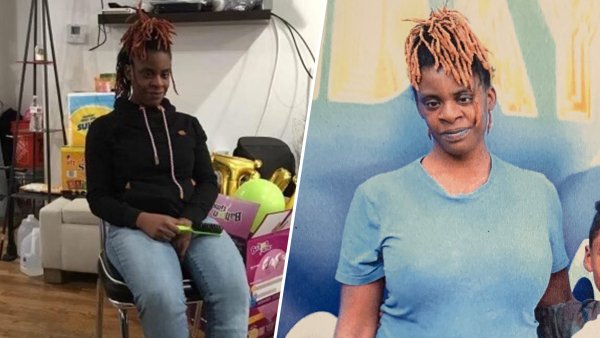 Joei says Robinson and Stephanie were staying in separate rooms at the hotel. She says they did not know each other.

Stephanie had three adult children and three grandchildren. Her remains have not been identified. Joei has agreed to provide a DNA sample to assist with the investigation of her sister's death.

Robinson is known to have lived in D.C., Prince George’s County, Maryland, and New York, Davis said. He has a “remarkable absence of a criminal history,” compared with the horror of the crimes of which he’s accused, the chief said.

The bodies of Redmon and Smith were found a short distance from each other in a lot in a commercial district of Harrisonburg on Nov. 23, the city’s chief of police, Kelley Warner said at the news conference Friday. Police believe the women were killed at different times. A shopping cart was found nearby.

Ten days later, on Wednesday, Dec. 15, police received new information and returned to Route 1 to expand their search. Homicide detectives found something in a wooded area near the Moon Inn.

“Remembering that the victims in the Harrisonburg murders were transported by using a shopping cart, detectives observed a shopping cart in the wooded area not far from the Moon Inn. Beside the shopping cart was a lone container,” said Ed O'Carroll, commander of the major crimes unit in Fairfax County.

The investigation is ongoing, and Fairfax County officials promised tireless work to close the case and find justice for victims and their families.

Anyone who knows Robinson or may have spoken with him on a dating site is asked to contact police.