New Fairfax County Police Chief Addresses Concerns About His Past

Just hours after a community forum where some residents called for his ouster, new Fairfax County Police Chief Kevin Davis held his first press conference, promising to make his department a model for the nation.

On his fifth day on the job, Davis showed up at a homicide scene early Friday.

“I’m here so the community sees that its leadership cares about a murder at 4:40 a.m.,” he said. 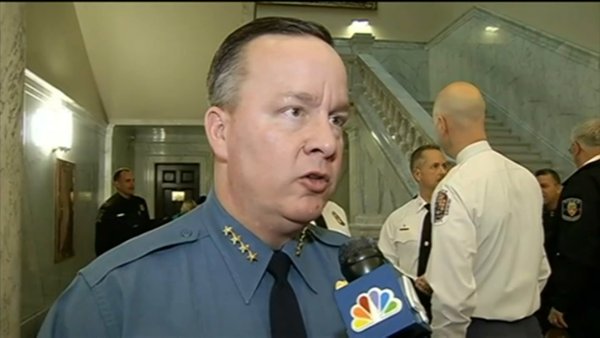 During a virtual forum Thursday evening, Davis was grilled by community activists concerned about his selection as chief.

“I ask that you fire Kevin Davis for his history of racist violence,” one said.

Concerns about Davis arose after News4’s Tracee Wilkins detailed an 1989 incident in which he was accused of police brutality in Temple Hills, Maryland, leaving a young man bloodied during a traffic stop. Mark Spann won a civil suit against Davis.

“My recollection, Julie, of that incident differs from his recollection,” Davis said. “I’m not going to get down and besmirch him.”

In 1993, Davis was accused in another lawsuit of illegally detaining a young man.

Davis moved up the ranks in the Prince George’s County Police Department, later becoming the Anne Arundel County police chief and Baltimore police commissioner, where he was recognized for enacting reforms.

“The best thing I can do right now for folks that have concerns and questions about 1993 or any other time is be the best police chief I can possibly be,” he said.

Some community leaders say the selection process was flawed and citizens should have been more involved, included on the interview panel.

“This is not a good way to start off,” said Andrea Misiko Andere of Fairfax Racial Equity Task Force. “This doesn’t build trust.”

Davis promised officers he understands their anxiety and will provide due process when they come under scrutiny.

“The only thing I can do is ensure that going forward I’m going to be a police chief that they’re going to respect,” he said.

The chief is detailing what he’s calling his first 100-day plan, which could come as soon as next week.

At Thursday night’s community forum, Board of Supervisors members said they stand behind Kevin Davis.