The suspect also assaulted a woman who tried to help the girl, police say

A homeless man is facing a number of charges after police say he abducted and sexually assaulted a girl who was walking to school and beat a woman who tried to intervene.

Adam-Seth Nathaneal Walter, 26, appeared in court via video for an arraignment Wednesday morning. He is charged with 12 counts including assault, abduction and rape. Police say Walter is homeless and a convicted violent felon.

During Wednesday's arraignment, Walter sat hunched over in a wheelchair, refusing to speak. An officer said Walter had refused to talk or go to court that morning, but the officer told Walter that refusing wasn't an option.

Walter continued to sit in silence during the hearing, refusing to speak up when the judge asked him if he planned on retaining an attorney. When he failed to answer, the judge appointed him a lawyer.

Police say Walter grabbed the 11-year-old victim as she was walking to school Tuesday morning.

Leticia Aguilar was on a morning walk with her dog when she saw the girl and Walter together. She told News4 that the girl spoke up, warning her that Walter had a gun.

The suspect then began a brutal assault on Aguilar, according to her son, Elder Espina Aguila.

"He grabbed her phone and she tried to grab it back from him, and that’s when he hit her in the face four times," Espina Aguilar recounted his mother saying.

Espina Aguilar says the man dragged both his mom and the girl to the backyard of the house, sat them down on the grass and pointed the gun at them.

The suspect allegedly warned he would shoot if they moved. Aguilar offered her car keys and begged the man to leave. 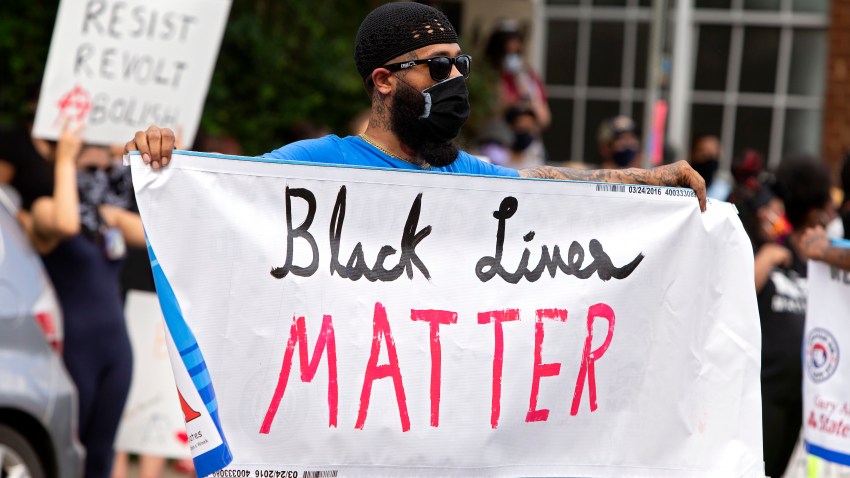 Aguilar fought the suspect as he tried to go inside the home and grab a knife, her son said. She started yelling for Espina Aguilar, who awoke and grabbed a sledgehammer from under his bed.

The suspect ran off with the girl.

"And I tried running after him, but my mom ended up tackling me on the front lawn because she was scared of me getting shot," Espina Aguilar said.

The suspect took the girl to Cumberland Drive, where he sexually assaulted her, police say. The girl was released before the suspect ran away.

Espina Aguilar saw the girl after the attack.

"She was traumatized. She was just crying, didn’t want to talk at all," he said. "I feel like we could’ve done more, but in a situation like that you just don’t know what to do."

Officers found the girl a short time later and began a thorough search of the area. Police in tactical gear searched under cars and in trash cans, from the air and from motorcycles.

Forensics officers were able to link Walter to the crime after collecting evidence from the scene. He was arrested without incident.

In the attack on the girl, Walter was charged with abduction with intent to defile, rape, aggravated sexual battery, indecent liberties and two counts of sodomy.

In the attack on Aguilar, he was charged with abduction, robbery, burglary, malicious wounding and gun charges, including possession of a firearm by a convicted violent felon.

It does not appear that Walter knew either victim, police said. Police originally said that Walter is older.

Police notified three local schools in the area, and the schools notified parents about the terrifying ordeal. Kids were walking home with adults and in groups at the end of the day.

Aguilar spoke to News4 after returning from the hospital. She had bruises forming on her face and was very emotional in recounting the horror.

"You just lose that sense of safeness," Espina Aguilar said.

Walter's next hearing is scheduled for Dec. 13.