As scores rallied peacefully at the Justice for J6 rally, one person nearby was arrested with a knife and police appeared to escort multiple people away from the crowd

U.S. Capitol Police reported four arrests and broke up an argument Saturday after scores of people rallied in support of Jan. 6 rioters.

There were some tense moments before and after the largely peaceful Justice for J6 protest. Two people with weapons were arrested near the Capitol, police said, and some of the protesters were wearing riot gear.

The rally kicked off at noon on Union Square, about a block west of the Capitol, and came to an end near its scheduled time, 1:15 p.m. 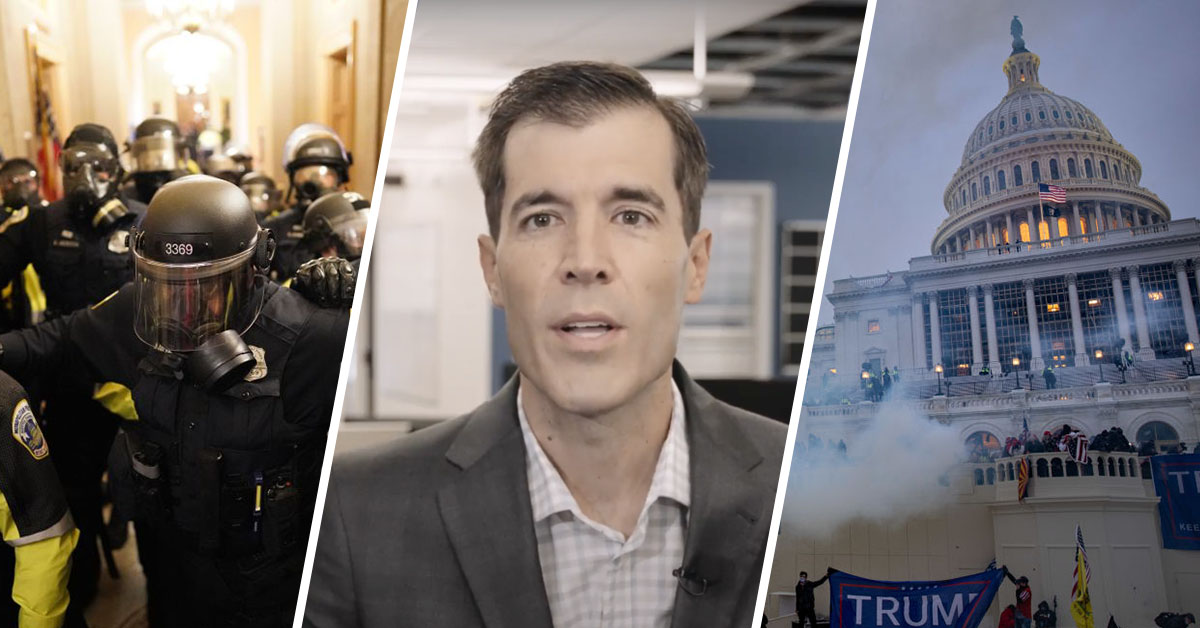 One man who allegedly had a gun was charged with unlawful activities after a witness reported him to officers, Capitol Police said. It's unclear why he was at the rally.

Another man, allegedly carrying a knife, was arrested on a weapons charge about 12:40 p.m., as the rally was ongoing, police said. It wasn't immediately clear if they were attending the rally.

Earlier in the day, police stopped a car along Louisiana Avenue and arrested two people who had outstanding felony warrants in Texas, one for a firearms offense and another for probation violation. It's unclear if they were attending the rally.

A handful of counterprotesters arrived as the Justice for J6 rally was beginning, but vocal ones were steered away by police. Authorities also quickly moved in to break up an argument between opposing protesters, News4's Mark Segraves reported.

The law enforcement presence Saturday was different from what the nation saw on Jan. 6. From the coordination among agencies to the gear officers were wearing, police were taking no chances. News4's Darcy Spencer reports.

U.S. Capitol Police estimated that the crowd was about 400 to 450 people, excluding law enforcement. However, News4's Mark Segraves says members of the media vastly outnumbered the protesters, and the actual number of protesters may have been closer to 200.

The crowd began to dissipate as the organizer urged attendees to travel in groups and go home.

As people moved away from Union Square, the Capitol Police Civil Disturbance Unit responded and again separated a group of protesters and counterprotesters near Third Street and Pennsylvania Avenue without incident, police said. No one was arrested.

D.C. police said they made no arrests related to the rally.

The Justice for J6 rally put law enforcement on high alert after the insurrection and other incidents near the Capitol. Arlington police officers, deputized in an effort to step up security, were seen wearing riot gear, WTOP's Alejandro Alvarez reported.

News4's Mark Segraves captured video of police breaking up an argument between Justice for J6 rally participants and opposing protesters.

Rally organizer Matt Braynard, a former staffer for President Donald Trump who now runs a group called Look Ahead America, called for a peaceful demonstration. In his opening remarks, he asked people to think of the U.S. Capitol Police officers who died in the aftermath of the insurrection.

Speakers characterized the hundreds of people arrested in the Capitol riot as "political prisoners." Braynard said he wants people who aren't accused of violence freed.

News4's Scott MacFarlane has reported that most "lower-level cases" where defendants aren't accused of damaging anything or injuring anyone are being charged as misdemeanors. The most serious charges are against people accused of conspiracy, plotting and planning.

Two layers of reinforced fencing separated a grassy area with a stage from the plaza around the Capitol Reflecting Pool.

Vendors were seen wheeling carts downtown filled with American flags and affixed with signs saying “stop the steal,” a reference to unfounded claims of fraud in the 2020 election.

At least one counterdemonstrator was using a dolly to wheel around a large sign reading “loser.”

A tall fence reinforced by concrete barriers is blocking free access to the People’s House and National Guard members were on standby — but they weren't armed, officials said.

Alexis Wittman was near the rally site hours before the event was set to begin. She brought a sign that says "it's not a crime to hold a sign."

"I have friends cautioning, 'Be careful, be careful,' but you can't let that keep you from your freedoms," Alexis Wittman said. "I can be here and be a force for good if something does happen."

Thousands of police officers are working to secure the U.S. Capitol and neighborhoods in Washington, D.C., Saturday, anticipating hundreds of demonstrators to converge in support of Capitol riot defendants. News4's Derrick Ward reports.

Both the Metropolitan Police Department and the U.S. Capitol Police said they planned to have “all hands on deck.”

"Your police department is down here," D.C. Chief of Police Robert Contee said in a message filmed near the Capitol. "Enjoy our city, it's a beautiful day, we've got this covered."

Police from local departments in Maryland and Virginia were called in to assist, including from Anne Arundel, Fairfax, Prince George’s and Montgomery counties, officials said.

“We're part of this national capital region. This is important to the entire area,” he said. “What happened on January 6 can't happen again.”

U.S. Capitol Police posted photos showing dozens of officers being sworn in on a closed street.

U.S. Capitol Police Chief Thomas Manger said there was “chatter” about potential threats or violence at the rally.

“It's tough to say whether they're credible or not. We don't know with any certainty, but what we do know is that this chatter that we heard prior to January 6 obviously turned out to be,” Manger said.

Manger said potential violence between counter-demonstrators and the rally participants was a big concern for his department. One of the three counterprotest groups has had a history of clashes, he said. He did not specify or say the name of the group.