“I feel blessed because in that moment you think you’re going to die," said a man who saw it happen

A pedestrian bridge crashed down onto traffic on DC-295 in Northeast Washington, D.C., after a crash Wednesday, leaving at least five people injured and trapping a truck that leaked diesel fuel into drains. The most recent inspection determined the bridge was in poor condition.

Investigators believe a truck struck the bridge, causing it to come loose and collapse.

The bridge collapsed at about 11:50 a.m. and spurred more crashes. Crime scene and police investigators are trying to determine the cause of the initial crash, Deputy Mayor for Public Safety Chris Geldart said. 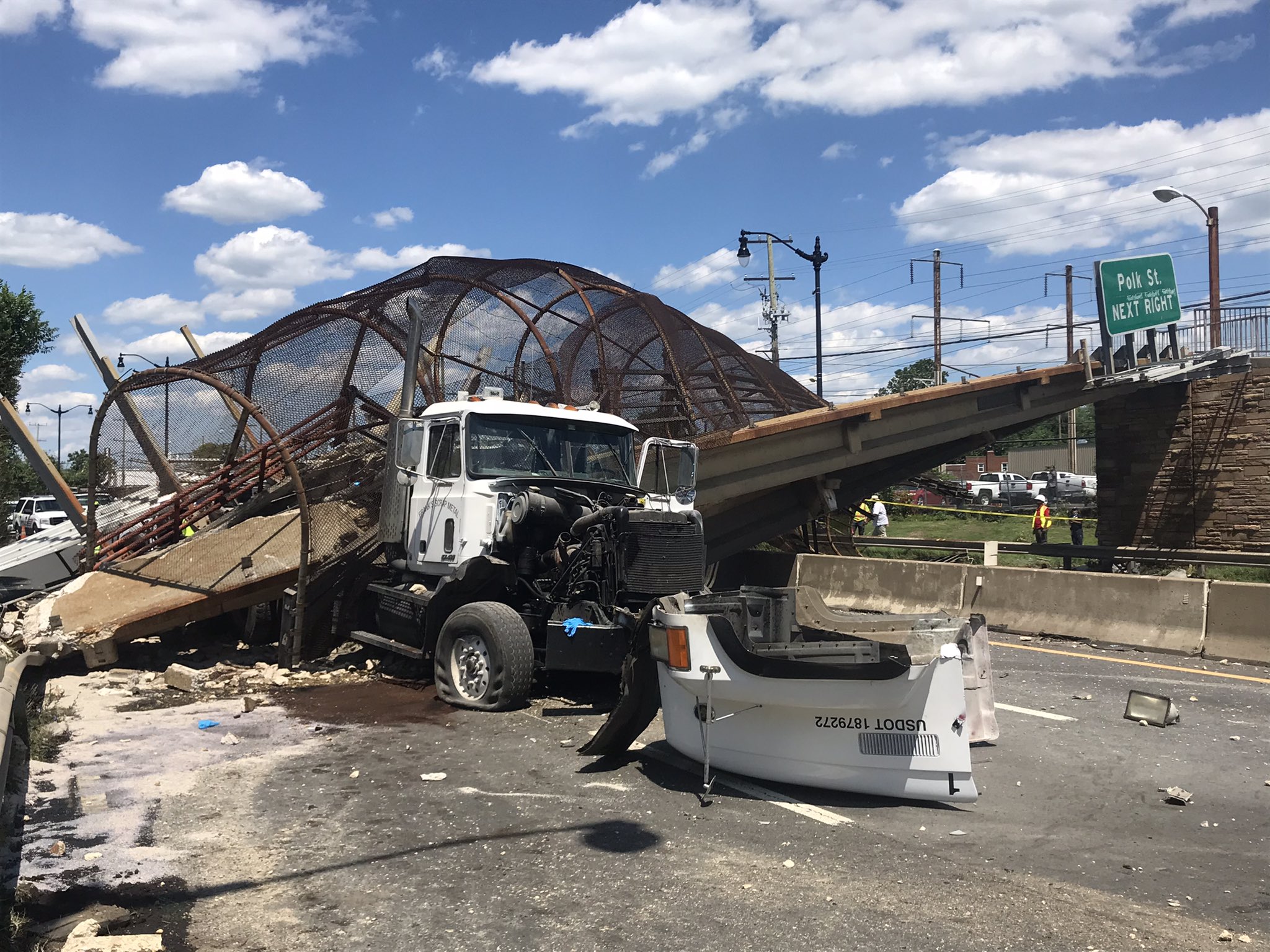 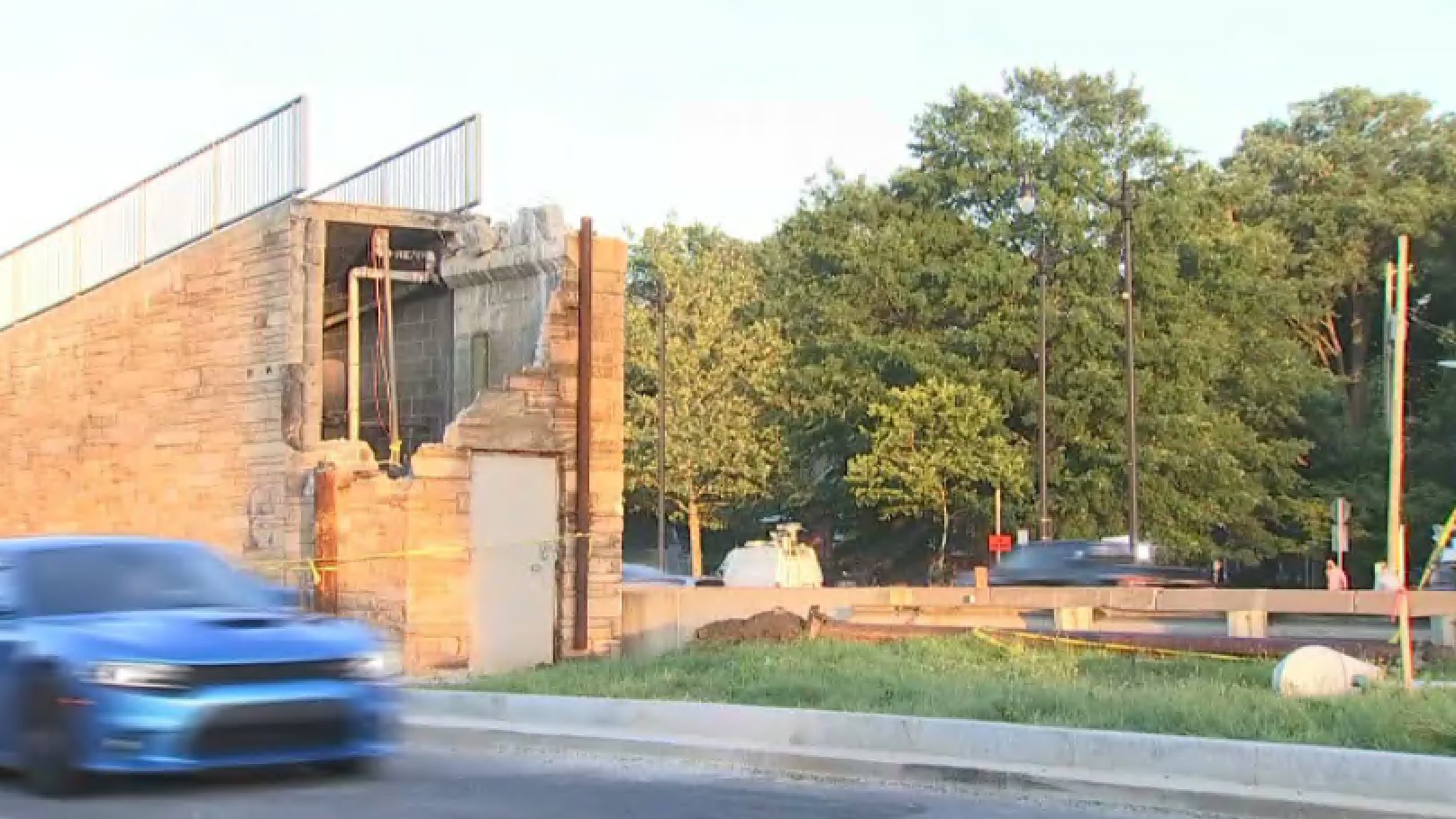 Staggering Chopper4 footage showed the bridge on top of three lanes of the roadway. Fencing hung over three lanes of traffic in the opposite direction. Slabs of concrete and metal fencing were piled over a truck at one end of the bridge, which appeared to have completely detached from a staircase and platform.

The debris bent the roof of a car near the bridge and shattered the windshield.

A construction worker who was on his way to work said he heard a crack, saw the bridge fall and slammed on the brakes.

“I feel blessed because in that moment you think you’re going to die," he said in Spanish.

Five people who were in cars nearby were taken to hospitals with injuries, Geldart said. Their injuries are not considered life-threatening. DC Fire and EMS also said two people were evaluated but not taken to hospitals.

D.C. city leaders including ANC commissioner Kathy Henderson and Councilmember Vincent Gray have called for an investigation to fully understand why the bridge collapse after being struck.

"It is imperative that we understand how this disaster occurred and implement all precautions to ensure that something like this never happens again," Gray said. "Lives could have been lost."

The bridge received a 4, or "poor," rating after it was inspected in February, Geldart said. It had declined on a national scale that rates bridges from 0 to 9 from April 2019, when the bridge had been given a 5, or "fair."

A rating of 4 is "the threshold that prompts the multiyear planning process to replace the bridge," Geldart said.

Officials first said the bridge was last inspected in February and there were no structural concerns. But later, Geldart said that he misstated the current condition detailed in a report released May 25.

It's unclear if the poor condition played a role in the collapse, but officials say a collision incited it.

“Everything we see in the accident scene right now leads to this being a collision pulling the bridge off its mooring,” Geldart said, adding that the findings are preliminary. "We do believe this was caused by the collision."

Geldart said the road should be reopened by morning rush hour, nearly half a day earlier than originally planned, while officials reconstruct the crash and clean up the wreckage. DC-295 reopened early Thursday.

Five people were hurt but are expected to be OK. News4's Pat Collins spoke with witnesses.

Authorities are investigating whether a truck hit the bridge, which Geldart estimated is 14 feet high.

City leaders say that truck should have been able to fit under the bridge, but they are going to inspect all other bridges along the road that the truck passed under.

The truck was partially trapped under the debris and leaked about 25 gallons of diesel fuel into nearby drains. A hazardous materials team put down a substance to absorb diesel and mitigate the risk to waterways, a D.C. Department of Energy & Environment spokesperson said.

The D.C. Department of Energy & Environment initially said the truck was carrying 500 of gallons of fuel. It's unclear what, if any, cargo the rollback truck was transporting.

Firefighters checked for cars underneath the collapsed bridge and initially reported no one was trapped. DC Fire and EMS first reported three minor injuries.

The bridge that collapsed over DC-295 connected Polk Street NE to the western side of Kenilworth Avenue NW near Douglas Street NE.

The bridge was flanked by sets of stairs leading to platforms that are still standing. Those must be inspected to see if they're structurally sound after the crash, officials said.

DC-295 Shut Down in Washington

DC-295 was shut down for almost a day, but has since reopened.

DC-295 at first was expected to be shut down between U.S. 50/New York Avenue and the Interstate 695 interchange (near the 11th Street Bridge) until 10 p.m. Thursday, but it reopened early Thursday morning.

Local residents were allowed access, but anyone else should avoid the area, D.C. said.

Traffic backups were reported on DC-295 after the collapse, stretching at least 3 miles northbound and 1.5 miles southbound.

Editor's Note: The collapse occurred on DC-295, north of Interstate 295.

Stay with News4 for more on this breaking news.