Here's What Next at DC's Wharf and Fish Market

Developer Monty Hoffman said he knows a common gripe about The Wharf: that there’s not enough parking. He said a solution is on the way

The southwest waterfront is home to one of D.C.’s largest development projects, and it’s set to be complete this year.

News4 got an exclusive look at Phase 2 of development at The Wharf and an update on the future of the fish market after Captain White’s Seafood left in November.

On a tour of the area, Monty Hoffman, co-developer of The Wharf, pointed out different styles of architecture that will come together.

"We did this to make it a lot of texture, make it authentic, so it doesn’t look cookie cutter," Hoffman said. "You'll experience this especially in the evening when it's lit, it's going to be breathtaking."

Phase 1 of development has been open since 2017 and has proven to be a popular destination. Construction on Phase 2 began in March 2019, before the pandemic hit.

"We had all these visions, and plans and then Covid came," Hoffman said. "Supply disruptions that you hear about... We stayed on schedule."

Phase 2 will include more than a dozen new restaurants and a new luxury hotel. New York City’s popular Philippe Chow will open a waterfront eatery. Also coming are Mason’s Famous Lobster Rolls, the burger restaurant Lucky Buns, the chocolate shop Kilwins and Scissors & Scotch, where you’ll be able to get a haircut and a drink at the same time.

Residential units are coming too, with waterfront views.

Hoffman said he knows a common gripe about The Wharf: that there’s not enough parking. He said a solution is on the way.

"It's a combination of adding another thousand spaces, plus facilitating the water taxis coming in and out, our bikes, Uber, drop-offs -- working all the logistics to bring in and out people safely," he said. 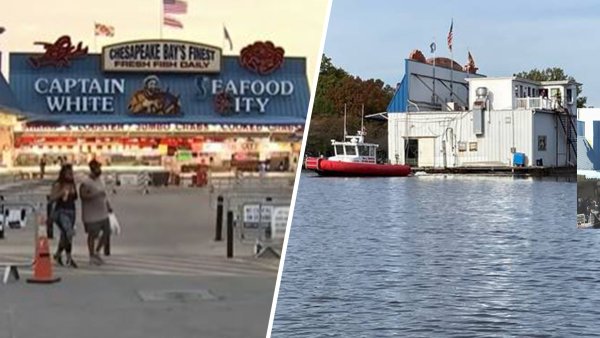 Hoffman revealed what will go in Captain White’s old space at the fish market; Jessie Taylor Seafood will expand.

"We want to refortify those piers for the next several generations to come," he said. "It will be Jessie Taylor expanding, and we're actually talking to a couple of others, but it will all be seafood."

Phase 2 of The Wharf is scheduled to open in October.