Virginia state Sen. Amanda Chase, who has embraced the moniker “Trump in heels," could be heard reacting

An aide for Virginia Republican gubernatorial candidate Amanda Chase brandished a gun in a road-rage incident while the candidate participated in a virtual gun-rights debate in the back of her campaign van.

In the midst of a candidate forum with the Virginia Citizens Defense League, Chase — who was participating by phone in the Tuesday debate — shouts “No. Stop.”

“Speaking of a Second Amendment moment, we just had to, oh, my goodness, we are exercising our Second Amendment rights right now on our car, where we had somebody road rage, trying to get in front of us,” Chase says.

Just prior to that, a male voice can be overheard saying, “That'll get your b—— a— in the car, won't it?” 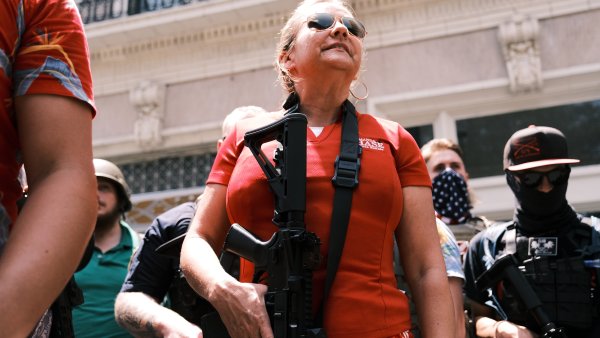 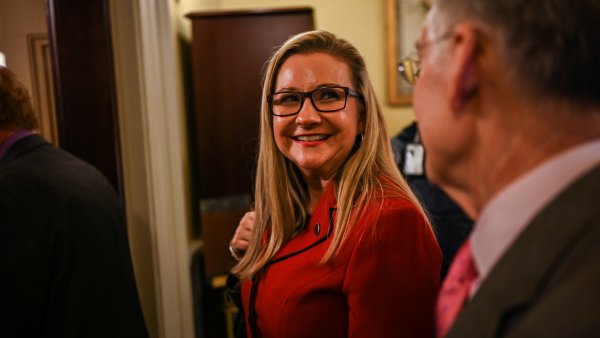 Shayne Snavely told The Washington Post he displayed an AR-15 pistol after a passenger in a sedan got of his car and started walking toward the van with a hand in his pocket.

“Yeah, he got a gun in his face,” Snavely said, who referred to the AR-15 as "a little bit of overwhelming force."

Snavely, who was driving, said the other car kept pushing into them while he was in an exit lane, and that the passenger in the other car actually opened the door while moving and gesticulated at the van. Snavely said he displayed the pistol after the car continued to follow the van after exiting the highway.

Within a minute or two of the incident, Chase resumed the debate.

“You never know, even driving on the campaign, when you’re going to have to exercise your Second Amendment rights,” she said during the debate. “And we just avoided a scene while I’m here doing this Second Amendment rally. I promise, this is not staged right now. Oh, my gracious.”

Norfolk Police said they had no record of the incident. Chase's campaign said they did not report it to police.

Chase is one of seven Republican candidates for the Virginia gubernatorial nomination, which will be decided at a May 8 convention. Chase has closely aligned herself with former President Donald Trump and embraced the moniker “Trump in heels.” She routinely carried a gun at the state Capitol until the legislature banned the practice last year.