Polls are closed in D.C., Maryland and Virginia

Joe Biden is projected to win D.C., Maryland and Virginia, according to NBC News.

U.S. Sen. Mark Warner also is projected to keep his seat in the Senate, according to NBC News.

A steady stream of voters wearing face masks headed to polls on Election Day in D.C., Maryland and Virginia — after record numbers of residents voted early.

Many polling places in D.C. and Northern Virginia had short lines or no lines at all. In Prince George’s County, voter turnout was steady with few long lines.

Many voters told News4 they were pleased to find fast-moving lines.

“I just assumed that I’d be in line forever,” Courtney Barker said in the Columbia Heights neighborhood of Northwest D.C. “A massive difference from the primaries.”

A staggering 100 million Americans had already voted early in person or by mail by Election Day. That’s about two-thirds the number of all votes cast in 2016. In D.C., Maryland and Virginia, 5.4 million people had already voted.

Super vote centers such as Capital One Arena in D.C. and FedExField in Maryland reported short waits Tuesday morning. Voters also moved quickly through the Fairfax County Government Center, after long lines were frequently spotted there during early voting. 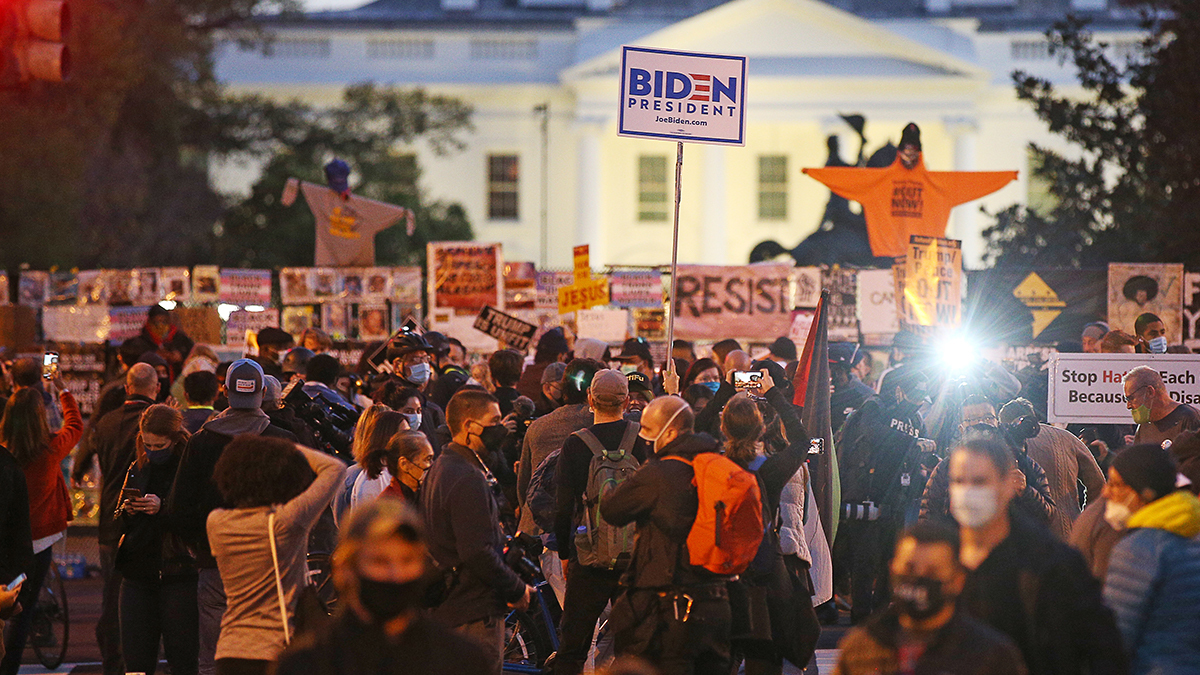 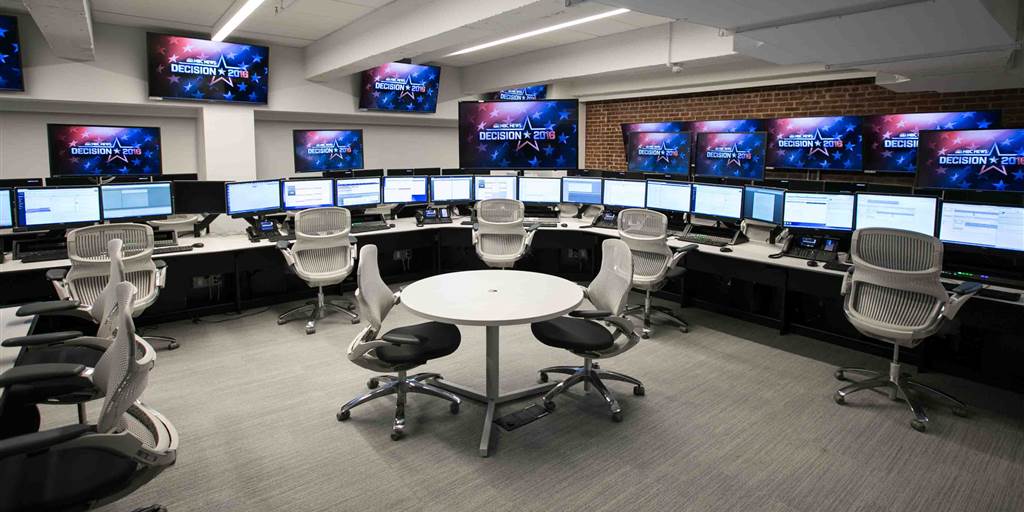 In Calvert County, Chopper4 filmed a long line of voters leading out of Northern High School, one of five vote centers in the county. At 11 a.m., wait times at four of the locations were about two hours. The Community Resources Building had a much shorter line.

Prince William County election officials said there were problems with ballot scanning machines at five or six precincts in the west end of the county this morning.

Voters would mark their ballots, but the scan machine wasn’t taking the ballots, said Keith Scarborough of the office of elections. New machines and new ballots were deployed, resolving the issue by 10:30 a.m.

Any votes that could not be scanned will be counted by hand Tuesday night, Scarborough said.

The machines could have been affected by cold weather, the county told News4’s Drew Wilder. Election officials assured voters that every ballot would be counted.

Virginia Board of Elections officials said in a midday briefing that nearly 1.8 million people voted early and in-person and another 956,000 absentee ballots had been returned via mail or drop box. Those numbers represent 68% of the total number who voted in the 2016 election.

Still, interest remains high on Election Day. A hotly contested presidential election between President Donald Trump and former Vice President Joe Biden, control of the House of Representatives and referendums are among issues drawing D.C.-area voters to the polls.

A group of voters bundled up in jackets and wearing masks arrived at Capital One Arena, one of D.C.'s six super vote centers, within an hour of the polls opening.

Voters wearing masks in Northern Virginia were lined up before the polls opened at 6 a.m. for day-of voting, but most of the voters cycled through quickly.

Voters wearing masks in Northern Virginia were lined up before the polls opened at 6 a.m. for day-of voting, even after a record number of early votes were cast. News4's Juliana Valencia reports.

“We could have came and voted early, but we thought it was super important to come and vote on Election Day,” Bianca Ndlovu said as she voted with her mom and sister in Fairfax County.

In Prince George’s County, more than 111,000 people voted early. It's the second-highest turnout of any jurisdiction in Maryland.

FedExField is expecting about 5,000 people to show up and vote on Election Day. News4's Darcy Spencer reports.

About 5,000 voters were expected to cast ballots at the super vote center at FedExField.

Prince George’s County Executive Angela Alsobrooks said the county is supporting the get-out-the vote effort and protecting voters' safety, in part by using golf carts to help seniors get to the polls.

Businesses and nonprofits plan to join the final push to get out the vote with discounts and freebies.

Lyft is offering half off one ride (up to $10) to polls or ballot drop boxes using code 2020VOTE. Capital Bikeshare has made rides under 30 minutes free.

Uber also will offer a 50% discount on roundtrips to the polls (up to $7 for each trip). Discounts also apply to bike and scooter rentals and can be found in the app.

Pizza to the Polls is prepared to make waiting in any long lines a little easier by sending food to voters. The organization has partnered with Uber Eats, Shake Shack and Milk Bar and will bring food to certain places that report long lines to their hotline, 866-OUR-VOTE.

Defined by a pandemic, a recession and mass protests over racial justice, the 2020 election is hugely consequential on the federal and local levels. The tension has spurred heightened security measures in downtown D.C., where many businesses have boarded up windows.

Masks at polling places, an increased police presence in D.C. and a rush of early voting all reflect the measures taken for security and virus prevention during this election.

Officials in the capital city have beefed up security, especially near the White House, and are bracing for the possibility that numerous planned demonstrations could turn destructive or violent as polls begin to close on Tuesday night.

Results may take longer to calculate this year as officials count a flood of mail-in ballots.

For example, officials in Fairfax County, home to more than 5.9 million registered voters, don't expect to be finished counting ballots until Saturday.

In D.C., voters were allowed to cast their ballots at any of the Election Day voting centers, including more than 80 regular polling places and six super vote centers that can handle crowds.

Races on the D.C. ballot included a crowded contest for two at-large city council seats and an initiative that would have police deprioritize enforcing laws for certain psychedelic drugs.

In Virginia, polls were open until  7 p.m.  As long as a voter was in line by 7 p.m., the voter was able to vote. Voters were told to take an approved ID to vote, or they may have to cast a provisional ballot.

Races on the Virginia ballot included a contest for a Senate seat between incumbent Democrat Warner and Republican challenger Daniel Gade. A proposed constitutional amendment on the ballot would create a non-partisan commission to draw the lines of Virginia’s congressional districts.

In Maryland, voters in line by 8 p.m. were able to vote. Voters were allowed to vote at any voting center in their county; they weren’t limited to only going to their usual assigned polling place.

In addition to choosing the next president of the United States, Marylanders voted for their respective representatives in Congress. A constitutional amendment would allow the General Assembly to increase, decrease or reallocate funds in the governor’s proposed budget each year starting in 2024.

The ballot also asked voters whether they approve of legalizing sports betting.

The election comes as coronavirus cases are surging in the D.C. area. Most polling places require voters to wear masks.

Election security and preparations in case protests escalate are top of mind for both federal and local officials in D.C.

Department of Justice personnel were present at voting centers in Montgomery County, Maryland, and Fairfax and Prince William counties in Virginia to ensure voting rights are upheld, similar to other years.

Protests and demonstrations are expected in Washington, D.C., regardless of the outcome of the presidential election.

At least six groups have requested permits for protests in the District over the next few days, D.C. officials said. Large groups are expected to gather in Black Lives Matter Plaza outside the White House, where organization Shutdown DC planned an election results watch party with bands and artists.

D.C. Mayor Muriel Bowser says peaceful protests are welcome, but prepared for anger and frustration to flare following a summer marked by daily or weekly demonstrations against police brutality in the city.

The sounds of low-flying police helicopters and hammers hitting plywood reverberated throughout the streets of D.C. in preparation for any demonstrations and protests.

All D.C. police officers are set to be on the city streets, the director of the city’s Homeland Security and Emergency Management Agency, Chris Rodriguez told reporters on Monday.

Many businesses downtown chose to board up windows in case of vandalism or destruction. Street parking is restricted on Tuesday and Wednesday.

Security is also stepped up around the White House, where crews worked into the evening on Monday to install a “non-scalable” fence around the complex.

Bracing for the possibility of unrest, officials have closed some of the green spaces that flank the White House. Lafayette Park and President's Park normally attract crowds celebrating on election night, but those nearby will notice fencing to create a buffer between possible demonstrators and the White House grounds.

Prince George’s County voter Javii Pittman had this wish: “My prayer is that no matter who wins the election, that we don't take our frustration out on each other.”

Stay with News4 for the latest updates on Election Day.