Obama: ‘We Are Made For This Moment, And We Will Seize It ‘

Official estimates of the attendance at the swearing-in ceremony and parade are hard to come by: U.S. Park Police and D.C. Police Chief Cathy Lanier both would not release them Monday.

But an inauguration planning official says turnout was "definitely above 800,000" and possibly up to one million people. Chris Geldart, who directs the District of Columbia's homeland security and emergency management agency, says early and unofficial estimates of the number of people on the National Mall indicate a turnout higher than 800,000, based on aerial views of how the crowd filled sections of the mall. 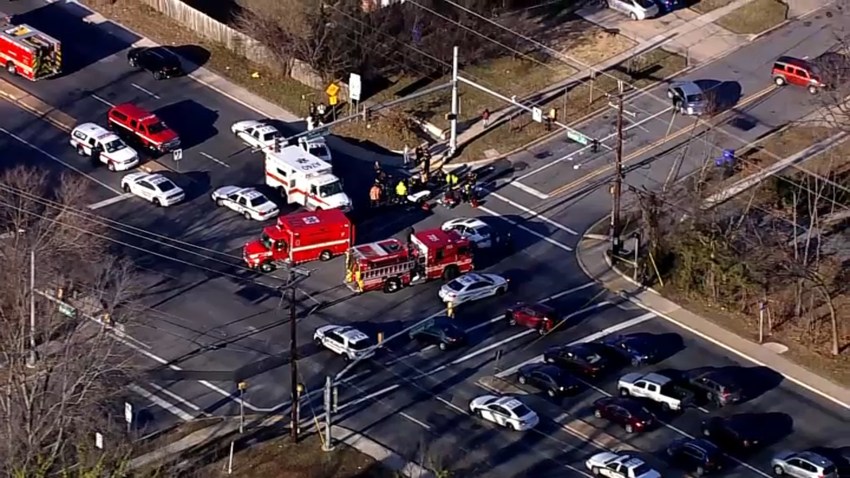 Metro said ridership on the system was about 70 percent of what it was four years ago - and was, in fact, close to ridership on a normal weekday.

For the crowds that filled the security zone on the National Mall to capacity, and who lined the parade route afterward, the number didn't matter.

"We saw the president of the United States, and it was just amazing to be here on Dr. King's holiday," one parade-goer told News4's Chris Gordon. "From the 'I have a dream' to the dream is real, to go home and protect the dream - it's just amazing."

For the second time in as many days Monday, President Obama swore to preserve, protect, and defend the Constitution of the United States, beginning his second term as America's 44th president.

Obama, who was administered the official oath of office by Supreme Court Chief Justice John Roberts in a brief Blue Room ceremony Sunday, swore the oath publicly at the West Front of the Capitol Monday on Bibles used by Abraham Lincoln and Martin Luther King Jr. before delivering an 18-minute address that called for the preservation of Social Security, Medicare, and Medicaid; equal pay for women; equal rights for gay Americans; and action on climate change.

"This generation of Americans has been tested by crises that steeled our resolve and proved our resilience," the president said. "A decade of war is now ending. An economic recovery has begun. America’s possibilities are limitless, for we possess all the qualities that this world without boundaries demands ... My fellow Americans, we are made for this moment, and we will seize it – so long as we seize it together."

Some of Obama's speech echoed his fall re-election campaign against Republican challenger Mitt Romney, such as his statement that "we, the people, understand that our country cannot succeed when a shrinking few do very well and a growing many barely make it.

"The commitments we make to each other -- through Medicare, and Medicaid, and Social Security -- these things do not sap our initiative; they strengthen us," Obama said. "They do not make us a nation of takers; they free us to take the risks that make this country great."

The speech was comparatively light on foreign policy, and there was no direct mention of the ongoing commitment of American and NATO troops in Afghanistan, where combat operations are due to end in 2014.

"We, the people, still believe that enduring security and lasting peace do not require perpetual war," Obama said. "We will defend our people and uphold our values through strength of arms and rule of law ... We will support democracy from Asia to Africa; from the Americas to the Middle East, because our interests and our conscience compel us to act on behalf of those who long for freedom."

Obama's remarks on climate change were more expansive, as he said the failure to "respond to the threat ... would betray our children and future generations. Some may still deny the overwhelming judgment of science, but none can avoid the devastating impact of raging fires, and crippling drought, and more powerful storms."

That segued into a call for the development of renewable energy sources, a process that the president said would be "long and sometimes difficult. But America cannot resist this transition; we must lead it. We cannot cede to other nations the technology that will power new jobs and new industries – we must claim its promise. That is how we will maintain our economic vitality and our national treasure – our forests and waterways; our croplands and snowcapped peaks. That is how we will preserve our planet, commanded to our care by God. That’s what will lend meaning to the creed our fathers once declared."

The president did not make any direct mention of gun control or gun legislation. Nor did the word    "gun" pass Obama's lips. Instead, there was this oblique statement: "Our journey is not complete until all our children, from the streets of Detroit to the hills of Appalachia to the quiet lanes of Newtown, know that they are cared for, and cherished, and always safe from harm."

Obama devoted only a single sentence of his remarks to immigration reform, which many believe will be a top priority of his second term: "Our journey is not complete until we find a better way to welcome the striving, hopeful immigrants who still see America as a land of opportunity; until bright young students and engineers are enlisted in our workforce rather than expelled from our country."

The ceremony was carried out before dozens of dignitaries and an estimated crowd of at least 500,000 people who packed the National Mall.

Crowds began to gather early Monday, after access points to the parade route opened before 7 a.m. Roads had already closed throughout the District, and there were lines at suburban Metro stations even before the system opened at 4 a.m., reported News4 Transportation reporter Adam Tuss.

The crowds in the early morning were manageable, already seeming to be considerably smaller than the crowds that swelled to almost 2 million people for Obama's first inauguration four years ago.

This time aruond, U.S. Park Police announced that the Mall was full and closed shortly after the beginning of the inaugural ceremony and began directing pedestrians to an overflow area near the Washington Monument.

However, some who hoped to hear the president's inaugural address were frustrated by a malfunctioning Jumbotron. Marcia DeSouza of Gaithersburg said she and her best friend, Nina Rodrigues, of Rockville, were unable to hear Obama's speech due to speaker problems near the monument.

No official crowd estimate was provided by Park Police.

The inaugural ceremony was a star-studded affair, featuring musical performances by the United States Marine Band, James Taylor, and Kelly Clarkson. Beyonce, who attended the inauguration with husband Jay-Z, closed the ceremony with a performance of "The Star-Spangled Banner."

Following a leisurely luncheon -- complete with toasts and gifts -- President Obama, Vice President Biden, and their wives departed from the East Front of the Capitol on the Inaugural Parade route, which would take them from the Capitol to the reviewing stand in front of the White House.

The slow cruise down Pennsylvania Avenue was interrupted when the president and first lady disembarked just past the intersection of Pennsylvania Avenue and 9th Street Northwest, rewarding spectators who had been waiting for most of the day to catch a glimpse of the first family as the music of Katy Perry, Kelly Clarkson and Nick Cannon blared from loudspeakers.

Witnesses reported that first lady Michelle Obama got slightly louder cheers than her husband, while D.C. Mayor Vincent Gray and Vice President Joe Biden also received warm applause. The Obamas returned to their vehicle after walking for about a block.

Susan Bagley of Phildelphia came to D.C. with her mother, brother, "future sister-in-law," husband, and 12-year-old daughter. They didn't have tickets and couldn't get onto the Mall for the ceremony even after three hours of trying, so they waited in line get on the parade route.

At Pennsylvania Avenue and 11th Street, a woman from Silver Spring named Evelyn, who would not give her last name, fondly remembered when Bill and Hillary Clinton took a longer walk up Pennsylvania Avenue at the former president's first inauguration in 1993. She wasn't able to see the first couple this time around.

Her niece Stephanie added: "I was just disappointed we couldn't see Obama. His window was up [by the time he got to us]."

Arlette Peguero of Rhode Island was lucky enough to catch a glimpse of the president and she was not disappointed: "He's even better looking in person. What an experience of a lifetime," she said. "Michelle looked absolutely stunning. She is absolutely flawless. I'm in awe."

D.C. resident Rodney Norman, also standing on Pennsylvania Avenue, was in good spirits during the parade. "It's all genuine love here," he said. "Everyone here just genuinely loves him... I think Obama gives us the hope that everybody is kind of like on the same level."

"It's his charisma," D.C. resident Charmyonne Bailey chimed in. "His charisma just warms your heart like, 'I'm glad that that's my president'."

Following the parade it was time for the Obamas and the Bidens to get ready for the official inaugural balls at the Washington Convention Center. Both couples attended the Commander in Chief Ball and the Inaugural Ball.

At the Commander in Chief Ball, the president spoke to a group of troops in Afghanistan via video, then introduced his "date," Michelle Obama.

Carissa DiMargo contributed to this report.