A bipartisan majority in the Virginia Senate voted Tuesday to advance legislation that would ban public school systems from imposing mask requirements on students.

The move comes as Republican Gov. Glenn Youngkin's efforts to end mask mandates by executive order are bogged down in legal challenges.

Democratic Sen. Chap Petersen, a moderate who has played a key role on education issues, sponsored the amendment on the Senate floor Tuesday. It passed on a 29-9 vote, with Republicans fully in support and Democrats about evenly divided. The bill itself was sponsored by Republican Siobhan Dunnavant.

In a letter Monday to Fairfax County Public Schools Superintendent Scott Brabrand, Petersen said he was frustrated that Fairfax and other school systems are still supporting universal mask requirements at a time when many are questioning their efficacy. Democratic states including Delaware, Connecticut and New Jersey have recently decided to end statewide mask mandates in schools.

“For the past two years, we have seen the lives of our children disrupted and destroyed by a pandemic that posed little, or no, threat to them physically,” he wrote. “Too many decisions involving children have been dictated by political expediency. As a parent, I've had enough.”

The bill must still pass the full Senate on a final reading as well as the GOP-controlled House of Delegates. It would then go to Youngkin for his signature. Youngkin could seek to amend the bill so it would take effect immediately upon passage. If so, it would go back to the legislature for passage on a majority vote. Such an action would be necessary for the measure to take effect during the current school year.

In a statement, Youngkin praised the Senate action. He said the bipartisan vote “shows that when we work across the aisle, we put Virginians first. I look forward to signing this bill when it comes to my desk.” 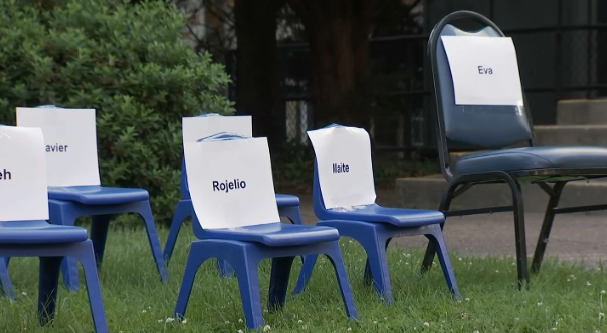 Sen. Adam Ebbin, one of the nine Democrats who opposed the amendment, said he didn’t think the legislature should dictate the policy.

“I’m hoping that we’re moving toward a position where we can stop requiring masks but I think public health has to be the guiding force behind regulations, not just an arbitrary admonition that masks are not necessary,” he said.

On his first day in office last month, Youngkin issued an executive order ending a statewide school mask mandate that had been imposed by his predecessor, Democrat Ralph Northam.

Youngkin's order also sought to ban local school systems from imposing mask mandates on their own accord. That prompted a legal challenge from school boards that argued that the executive order usurped their local authority. Last week, a judge in Arlington County issued a temporary injunction that allows local school systems to maintain their mask requirements while the issue is litigated.

As a result, school systems in Virginia are about evenly divided between those that require students to mask and those that don't.

Fairfax County Public Schools, one of the districts that sued to block implementation of Youngkin's order, said in a statement Tuesday, “We recognize we are all tired of COVID-related health measures, but choosing a random date to stop that is not supported by science is not the way to keep our students and staff safe."

The Senate legislation is specific to students and makes no mention of whether school boards can require teachers to wear masks.