Two recent graduates of Wootton High School in North Potomac, Maryland were killed in a car crash late Thursday after they left a party where police believe teenagers were drinking.

The crash occurred just before midnight on the 13800 block of Dufief Mill Road in North Potomac.

Alexander Murk of Potomac and Calvin Jia-Xing Li of Rockville, both 18, were pronounced dead at the scene. Driver Samuel Joseph Ellis, 18, of North Potomac, suffered life-threatening injuries. A 17-year-old passenger was also injured.

"It's too often this happens," Costa Sardelis, a friend of the teens, said through tears at the crash scene Friday. "They were good kids."

The four teenagers were heading home from a nearby house party when the 2006 Acura TSX driven by Ellis crashed through a fence, hit trees, went airborne and landed upside-down in a driveway, police said.

"All I heard was a loud explosion," neighbor Gloria Mayes said. "It rattled the house."

The car had been going so fast it broke into pieces when it crashed, Montgomery County Police Capt. Thomas Didone said. 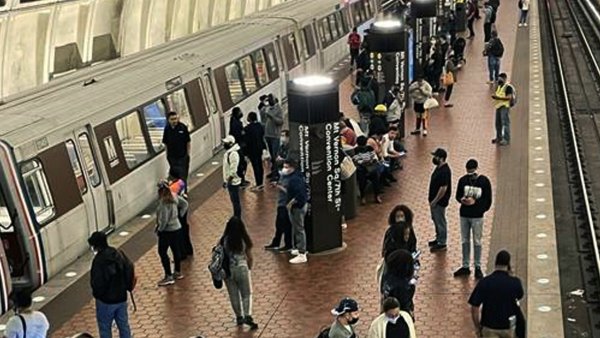 Coronavirus in DC Area 9 hours ago

"The rear bumpers, the front bumpers were torn off," he said.

Jia-Ling and Murk, who were riding in the backseat, were not wearing seat belts, according to police.

"It was quite clear to us that speed, alcohol and a lack of seat belts by the backseat passengers were factors involved in the collision," Didone said.

"[Officials] did find some beer beverage cans in the car at the time that were still chilled," he said.

Mourners laid flowers at the crash scene on Friday and put up a cross draped with an American flag -- in the same colors used by the Wootton Patriots.

A football was left at the scene; Li was a wide-receiver on the school's team, and Ellis was quarterback. Friend John Speis left a basketball.

“I played basketball with them on Wednesday. Both of them, Calvin and Sam, and I hurt my ankle and they carried me back to my house,” Speis said.

Parents in the community said the loss hit close to home.

"Whenever there's a loss like this in the community, every parent feels it. Every parent worries about their child and their child's friends," one parent said.

Though the school is on summer break, Wootton High will be open Monday with counselors available to speak from 9 a.m. to 3 p.m. with grieving community members, Principal Michael Doran said in an online notice.

"Our thoughts and prayers are with the families involved in this tragedy," Doran wrote.

The house party is under investigation, Didone said. Eight people were cited after the party for underage drinking.