An outside expert who inspected an immigration detention center in Virginia that experienced a massive coronavirus outbreak is recommending that some high-risk inmates be released after finding flaws in the center's screening procedures.

U.S. District Judge Leonie Brinkema ordered the inspection last month after several detainees filed a lawsuit with the help of legal activist groups. Brinkema faulted the detention complex in Farmville for an outbreak that affected more than 90% of the center's nearly 300 detainees, including a 72-year-old detainee who died. Government officials fought unsuccessfully to block the inspection.

The expert, Homer Venters, inspected the site last month and filed a report made public Friday that says the center does a poor job of screening inmates for COVID-19 symptoms. He recommended that detainees at high risk for the disease be released.

The report cites “multiple and systematic deficiencies” in the complex's health services and concludes that to be detained there "represents a significant health risk for high-risk patients.”

A report prepared by an expert hired by the detention center reached different conclusions. That expert, William Reese, said the biggest problem he saw was that detainees were refusing to wear masks. Given the inmates' "lack of cooperation ... it is remarkable that the facility has had no new positive tests among Detainees in nearly a month,” Reese wrote.

Venters, in his report, wrote that inmates dismissed staff entreaties to wear masks because they blamed the facility for getting them sick in the first place. The inmates also told Venters that they felt the masks were unnecessary since most everyone in the facility had already contracted the virus. 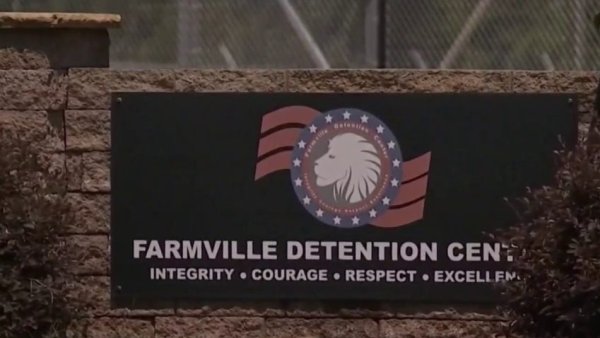 CDC Is at Federal Immigration Facility in Virginia to Address Virus

Venters' report found fault with numerous procedures at the center. In particular, he said the center's efforts to screen inmates with COVID-19 symptoms were insufficient, and that the vast majority of detainees told him they were never asked about symptoms when they submit to daily temperature screenings.

As a result, Venters said, the center's contention that no inmate has experienced COVID-19 symptoms since July is dubious.

He also wrote that detainees who reported being sick often went several days before they were seen by medical staff, despite assurances by the center that all detainees are seen within 24 hours of making a sick call.

“ICE and the facility caused the outbreak by accepting a mass transfer of people from facilities that had active COVID-19 cases, and they are failing to take the risk to the people in their care seriously,” said Sirine Shebya, an attorney with the National Lawyers Guild’s National Immigration Project who is representing the lawsuit's plaintiffs. "This raises significant concerns about ongoing risks to the people who are detained at the facility.”

At an earlier hearing, Brinkema criticized a “bureaucratic circus” for causing the outbreak, saying the center violated its own procedures by accepting 74 transfers from facilities in hot spot states Florida and Arizona without implementing any quarantine procedures.

A spokeswoman for Immigration and Customs Enforcement declined comment on the report, citing the ongoing litigation.