Trump Seeks Political Shot in the Arm in Vaccine Push

Trump's standing in the polls, trailing former Vice President Joe Biden less than 100 days before the election, underscores the urgency to highlight vaccines and therapeutics

President Donald Trump’s handling of the coronavirus pandemic put his political fate in grave jeopardy. Now he’s hoping to get credit for his administration’s aggressive push for a vaccine – and crossing his fingers that one gets approved before Election Day.

Trump and Vice President Mike Pence visited vaccine development sites on Monday, marking the beginning of the largest COVID-19 vaccine research trial yet. Their trips to North Carolina and Florida, respectively, come as the White House is grappling with its most prominent virus case since the crisis began and a nationwide spike in the outbreak that threatens to undermine an economic rebound. White House officials say a vaccine is necessary to fully restore a sense of normalcy.

“I heard very positive things,” Trump said, when asked about the timetable for bringing a vaccine to market, “but by the end of the year we think we’re in very good shape to be doing that.” 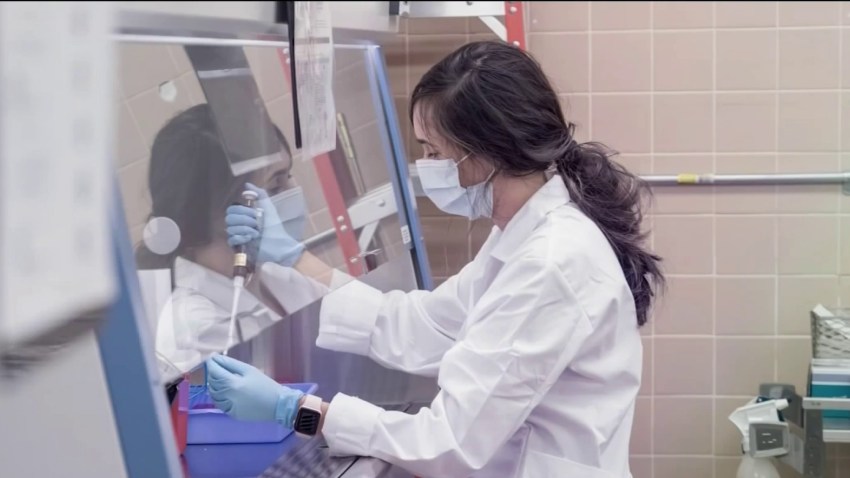 Fairfax Co. School Board Votes in Favor of Plan to Bring Some Students Back to Class

Trump's standing in the polls, trailing former Vice President Joe Biden less than 100 days before the election, underscores the urgency to highlight vaccines and therapeutics – which include the antiviral drug remdesivir and convalescent plasma.

With 4 million cases and counting, the United States hit yet another milestone in COVID-19 cases. Death rates in some states also appear to be soaring. Officials are now going to more desperate measures trying to slow down the latest surge of the deadly virus.

The economic toll of the pandemic has undone the job gains of Trump's presidency and his administration has faced bipartisan criticism for its handling of efforts to test and contain the outbreak. Trump aides view the hunt for the vaccine as something they can still get right.

Privately, many White House officials have pinned their reelection hopes on the potential emergence of a vaccine for the coronavirus, believing it to be the ultimate “October surprise.” Some believe Trump may well be doomed without one, and that even with one, it may be too late to save his fortunes with so many Americans expected to vote before Election Day on Nov. 3.

Under the federal government’s Operation Warp Speed vaccine program, multiple COVID-19 vaccines are being developed simultaneously with a goal of delivering 300 million safe and effective doses by January 2021.

Trump was visiting the FUJIFILM Diosynth Biotechnologies’ Innovation Center in Morrisville, a suburb of Raleigh. The facility has begun production of the first batch of a possible vaccine developed by Novavax, a Maryland company.

The batches produced at the North Carolina facility will be used in a Phase 3 clinical trial of up to 30,000 subjects, which is expected to begin this fall and will determine the drug’s safety and effectiveness, according to Novavax, which received $1.6 billion from the federal government under Operation Warp Speed.

The president is working to highlight progress in the development of a vaccine before voters go to the polls in about three months. Dr. Anthony Fauci, the nation’s top infectious disease expert, has said he is cautiously optimistic that one and maybe more vaccines will be available by the end of this year.

“The ultimate goal of this would be to get full licensure based on clear-cut efficacy and safety data,” Fauci told reporters Monday.

Peter Navarro, a senior Trump economic adviser, framed the effort as a political home run for Trump, who pushed for development of the vaccine while simultaneously working on a process to distribute it quickly.

But even as Trump has tried to shift the nation's focus from new infections to hope for cures, he's been interrupted by rising case loads across the Sunbelt and word Monday that Robert O'Brien, his national security adviser, has tested positive for the virus.

The political imperative for Trump has sparked concerns among members of Congress that Trump could try to take shortcuts in the approval process. Administration experts have dismissed those concerns, and Food and Drug Administration Commissioner Dr. Stephen Hahn said Monday, "We must maintain confidence of the American people in the scientific process.”

Hahn joined Pence in Miami to highlight the beginning of Phase 3 testing of a different vaccine candidate developed by the National Institutes of Health and Moderna Inc., which began its first injections Monday.

“It’s a historic day, a day when we begin in earnest to work on a vaccine,” Pence said.

“We want to ensure we move at a safe and effective pace. I want to assure the people of Florida and people all across this country that we will cut no corners in the development of this or any vaccine,” Pence added.

About 4.2 million confirmed COVID-19 cases have been reported in the United States and there have been more than 146,000 deaths.

With the election approaching, Trump has begun to run short on time to shift the narrative of the race, which so far appears shaping up to be as a referendum on his handling of the pandemic. He faces deficits in battleground states across the map, has struggled to land attacks on Biden and has been forced by the virus to scrap rallies and GOP convention events, moments he might have used to change the momentum of the contest.

Dr. Anthony Fauci, director of NIAID and member of the White House coronavirus task force, testified to Congress on Tuesday that a coronavirus vaccine could be available as early as the beginning of 2021.

Instead, White House aides seem to be growing more resigned to hoping for an outside event to change the trajectory of the contest, whether a serious misstep by Biden or, increasingly, a vaccine breakthrough. North Carolina is a key battleground state in the coming election, and Trump’s visit marks his 10th trip to the state during his presidency. Trump won the state by nearly 4 percentage points in 2016.

The state’s importance was reflected in the party’s plans to hold its nominating convention in Charlotte, before Trump moved the event to Florida, only to later cancel those plans as well. Instead, a small subset of GOP delegates will formally renominate Trump on Aug. 24 in Charlotte at an event scheduled to last just four hours.