Fauci Says US Could Soon Give 1 Million Vaccinations a Day

At that stepped-up pace, the country could see an impact on infections as early as spring — and hopefully by early fall, 'you could start thinking about returning to some degree of normality,' Fauci said

The U.S. could soon be giving at least a million COVID-19 vaccinations a day despite the sluggish start, Dr. Anthony Fauci said Tuesday, even as he warned of a dangerous next few weeks as the coronavirus surges.

The slow pace is frustrating health officials and a desperate public alike, with only about a third of the first supplies shipped to states used as of Tuesday morning, just over three weeks into the vaccination campaign.

“Any time you start a big program, there’s always glitches. I think the glitches have been worked out,” the nation's top infectious disease expert told The Associated Press.

Vaccinations have already begun speeding up, reaching roughly half a million injections a day, he pointed out.

Studies show there is still a good deal of mistrust in the coronavirus vaccines as the first wave of shots is rolling out to millions of Americans across the country. Dr. Khalilah Gates and Dr. Melissa Simon, both of Northwestern University's Feinberg School of Medicine, and who have both already received a first dose of the vaccine, talked to LX News about the importance of educating a skeptical public, rather than asking for faith.

Now, with the holidays over, “once you get rolling and get some momentum, I think we can achieve 1 million a day or even more,” Fauci said. He called President-elect Joe Biden’s goal of 100 million vaccinations in his first 100 days “a very realistic, important, achievable goal.”

It’s an optimistic prediction considering the logistical hurdles facing states and counties as they struggle to administer rationed vaccine supplies amid rising COVID-19 hospitalizations. Fauci pointed to California’s swamped hospitals and exhausted workers even before holiday travel and family gatherings added fuel to the outbreak.

Fauci estimated that between 70% and 85% of the U.S. population will need to be vaccinated to achieve “herd immunity,” meaning enough people are protected that it’s difficult for the virus to continue spreading. That translates to as many as 280 million people.

He said he is hoping to achieve that by the start of next fall.

The coronavirus has killed more than 356,000 Americans, and the next few weeks could bring another jump in infections nationally that “could make matters even worse,” Fauci said.

The Trump administration had promised to provide states enough vaccine for 20 million people in December, and fell short even as states struggled with their role — getting shots into people’s arms, starting mostly with health care workers and nursing home residents.

According to the Centers for Disease Control and Prevention, roughly 4.8 million doses of more than 17 million delivered had been used by Tuesday morning. That is probably an undercount because of delays in reporting, but it is far fewer than experts had hoped.

Still, Fauci pointed to a celebrated moment in history to back up his projection of ramped-up inoculations: In 1947, New York City vaccinated more than 6 million people against a smallpox outbreak in less than a month — and “one of them was me as a 6-year-old boy."

If a single city could do such mass vaccinations in weeks, “this is not something that is far-fetched” for an entire country, he said. “You can use school auditoriums, you can use stadiums. You can really ramp up the contribution of pharmacies.”

At that stepped-up pace, the country could see an impact on infections as early as spring — and hopefully by early fall, “you could start thinking about returning to some degree of normality,” Fauci said.

Amid mounting frustration over the slow vaccine rollout, governors and other politicians are talking tough and in some cases proposing to bend the rules to get people vaccinated more quickly. Health care workers and nursing home patients are still getting priority in most places. 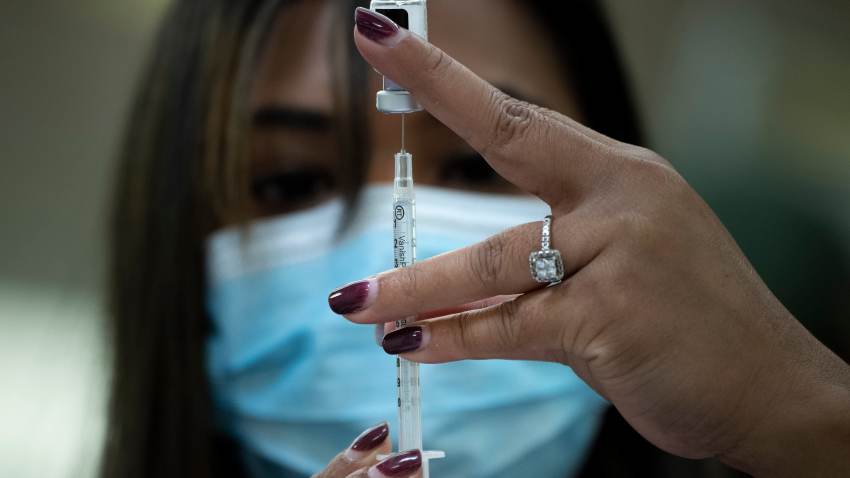 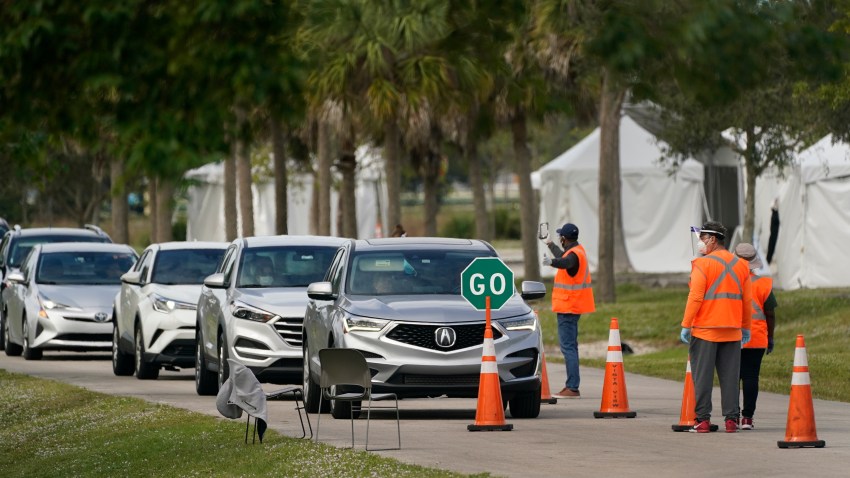 Gov. Henry McMaster of South Carolina said hospitals and health workers have until Jan. 15 to get a shot or they will have to “move to the back of the line.” As of Monday, the state had given out less than half its initial allotment of the Pfizer vaccine to about 43,000 people.

In North Carolina, Gov. Roy Cooper called in the National Guard to help speed things up.

In California, where just 1% of the population has been vaccinated, Gov. Gavin Newsom said he wants to give providers the flexibility to dispense shots to people not on the priority list if doses are in danger of going to waste.

The vice president addressed the media on Friday after receiving his first dose of the COVID-19 vaccination.

There’s no sign yet that a more contagious variant of the coronavirus first found in Britain — which forced England into another national lockdown on Tuesday — will outwit the vaccines. Fauci’s colleagues at the National Institutes of Health are doing their own testing to be sure, just as vaccine manufacturers are.

While the variant has been found in several states “it is certainly not dominant,” Fauci said. “We don’t know where it’s going. We’re going to follow it very carefully.”

The more contagious virus makes it even more important that people follow the public health precautions Fauci has preached for months, including wearing a mask, keeping your distance and avoiding crowds.

In addition, scientists are warily watching a different variant found in South Africa but not yet reported in the U.S. There have been reports that the mutation might make treatments called monoclonal antibodies less likely to work. Fauci said he couldn’t confirm that, but U.S. scientists will investigate.

In a historic moment, New York health care workers were among the first Americans to receive COVID-19 vaccinations.