Healthcare workers on the front lines are working long, hard hours amid the Covid-19 pandemic – some pulling extra shifts without even stopping to eat.

And as many restaurants across the country donate meals to keep essential healthcare workers fed, giving back to others has had another much needed consequence: It's helping keep those restaurants in business and their staff working.

Joseph "JJ" Johnson, is the owner of Fieldtrip restaurant in the Harlem neighborhood in New York City, which has over 100,000 cases citywide. And his wife is a nurse.

"[My wife] came home from work one day, and was like, 'It's 12 at night. I didn't eat all day. Did you cook? Did you bring any food home from Fieldtrip?'

Johnson knew he had to do something.

So on March 25, the chef sent 40 of his restaurant's signature rice bowls with meat or fish, vegetables and other sides from to Harlem Hospital Center, which had closed its food concession due to illness.

Johnson then shared his Harlem Hospital delivery on Twitter, adding that he would continue to deliver meals to hospitals in the area.

"Two people came on Twitter like, 'I want to send food through you guys tomorrow,' and I was like, 'Oh my god, that brings back like two of my team members,' because there's no possible way I could put out all this food by myself," Johnson said.

"From that moment, the momentum just kept going." 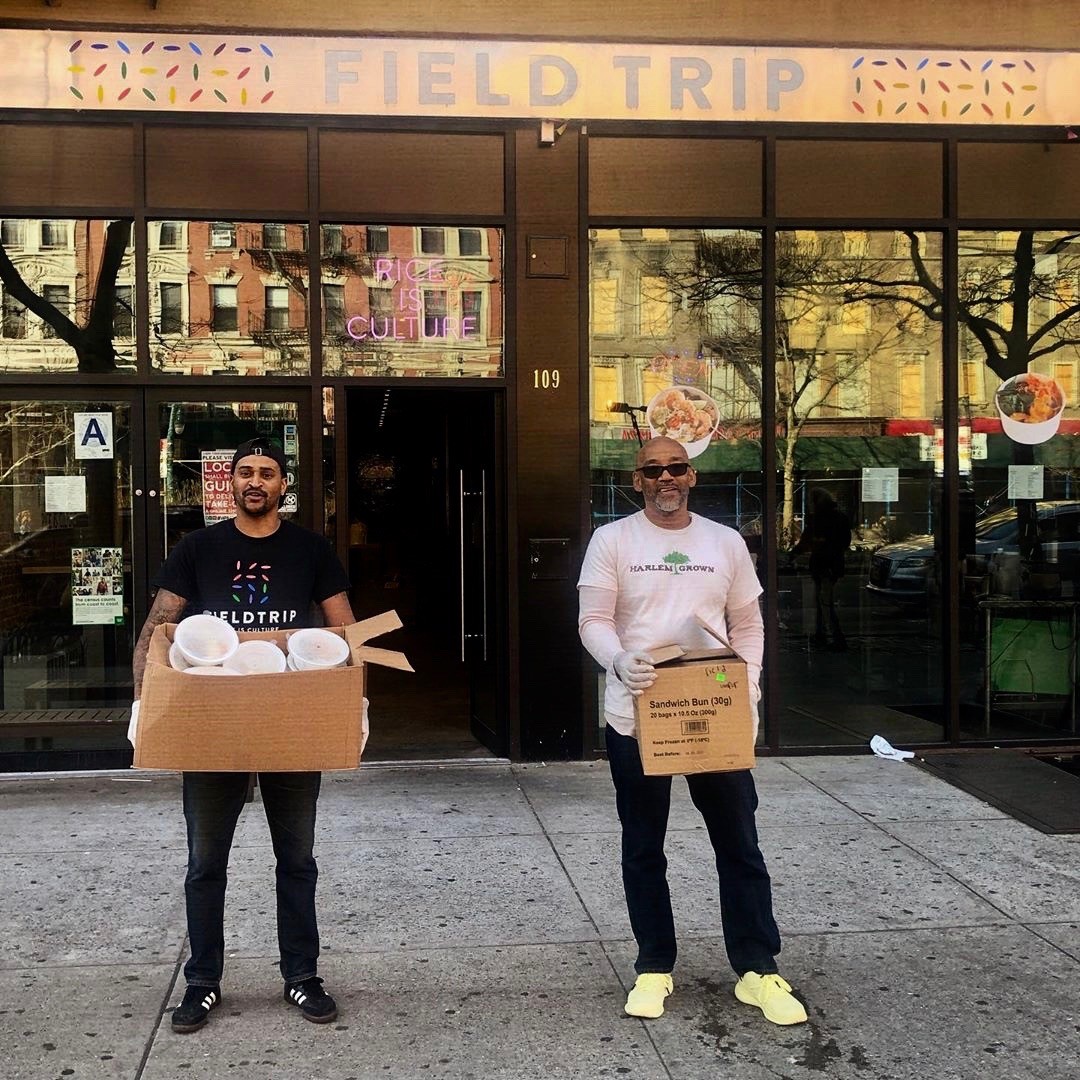 But delivering the meals has not only helped the community — it has also helped his restaurant and staff.

After the March 15 executive order in New York City mandating restaurants may only stay open for takeout or delivery, Johnson had to let his staff of 10 go, but with the intention to rehire them.

Now, to make and deliver the donated meals, he has brought back seven of his employees.

Each meal bowl from Fieldtrip is $10, and with every bowl purchased online, customers have the option to donate $8 for a free meal. As of April 3, Johnson and his Fieldtrip team had received around $15,000 in donations, he said.

"So, it came full circle. I could feed people. People are donating. They're able to sponsor a bowl. That then brings my staff back in to work, and now people have jobs. They feel hope," he said. 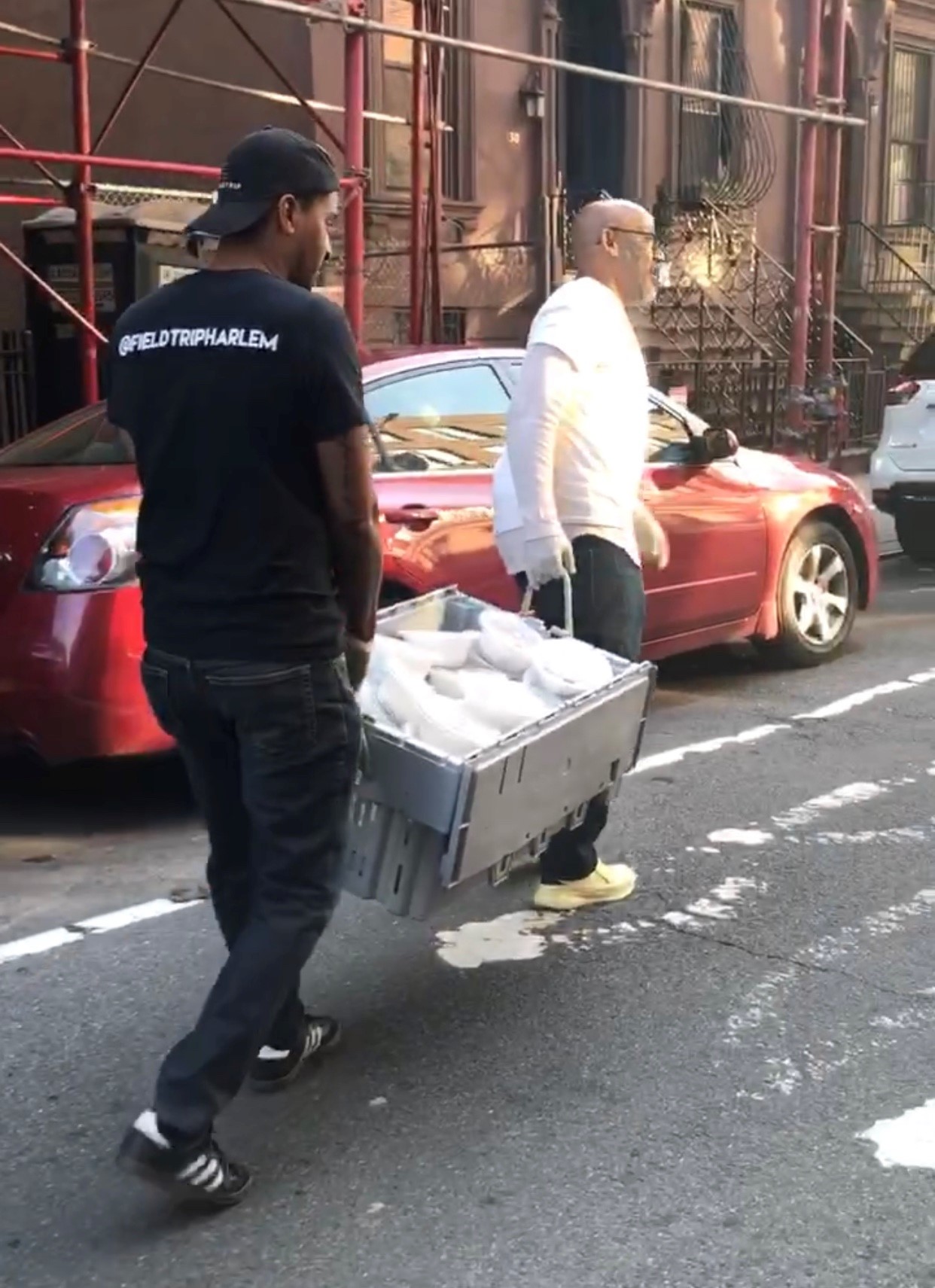 Eboné M. Carrington, CEO of NYC Health + Hospitals/Harlem, tells CNBC Make It that the hospital is "eternally grateful" for the donations. And Johnson and his team at Fieldtrip are also delivering free meals to other New York City hospitals including New York Presbyterian Upper Manhattan, Metropolitan Hospital Center and Mount Sinai Hospital.

For example, Johnson says he teamed up with Harlem Grown, a nonprofit teaching children about urban farming and nutrition, to deliver 170 meals to a children's shelter in Harlem, for which one of the organization's donors picked up the tab.

"It was their first hot meal in two weeks at that point," Johnson says.

And he was able to bring back his entire team for the delivery.

(Harlem Grown did not immediately respond to CNBC Make It's request for comment.)

"People have called me from all over the country wanting to sponsor bowls," Johnson said. "I'm going to start feeding the ambulance EMS workers, because they're working really hard here in New York."

Even some of Fieldtrip's regular customers could use a hand during the pandemic. Johnson says his first contactless delivery in March was to an elderly woman living alone.

"I went halfway down the hallway and I heard, 'Can you come back? I need your help.' She's like, 'Could you move my oxygen tank?' I moved her oxygen tank," he said, adding that her regular nurse aid was not able to visit her due to Covid-19. She also asked Johnson to feed her cat, and so he did. (Thought it may have been against the government's recommended protocol, he felt he needed to help.)

"She ordered twice more from us. It made me realize that nurses aids aren't allowed to go see their elderly patients, so what do these people do now?"

"I always believe that the community you live in, people need help," he says. "It doesn't matter how rich or poor the community is. Somebody always needs help."

Delivering to doctors in California

Across the country in California, a state which has nearly 22,000 cases, J. Kenji Lopez-Alt, chef and partner at beer hall Wursthall in San Mateo, California, is facing a similar reality.

"When we shut down from our normal operations, like every other restaurant, we had to let basically almost all of our employees go," Lopez-Alt, also chief culinary advisor for recipe site Serious Eats, told CNBC Make It.

A March 19 "stay at home" order in California mandated all restaurants and bars to close, only allowing delivery and takeout. So "We had a kitchen laying idle mostly," Lopez-Alt says. He decided to put his kitchen to good use by making meals to donate.

"When I first started, I was thinking of mostly people who were already food insecure, who were now out of a job or their kids were home from school and the kids aren't getting food. So how are these people getting food? So I started by just cooking and packing food basically out of stuff we had," he says.

"We weren't selling [food] anymore, and we had all this stuff that was going to go bad, so I started using it to cook meals."

Lopez-Alt then reached out to celebrity chef Jose Andres, who has been recognized for his efforts amid the pandemic, and teamed up with his nonprofit World Central Kitchen (WCK) to start delivering meals. WCK helped Lopez-Alt provide meals for doctors at a drive through testing site in Oakland, according to Tim Kilcoyne, WCK's director of chef operations, and Lopez-Alt also received support with health and safety protocols for delivery from Off Their Plate in San Francisco.

Lopez-Alt also started connecting with other hospital workers and other frontline workers who needed food. "People who are working nonstop who don't have time to go and pick up a meal or go to the cafeteria," he says.

"March 20 was when I started cooking, and ever since then, I've been at the restaurant four nights a week, from 8 p.m. until 1 or 2 a.m. cooking, and then delivering meals the next day," he says. 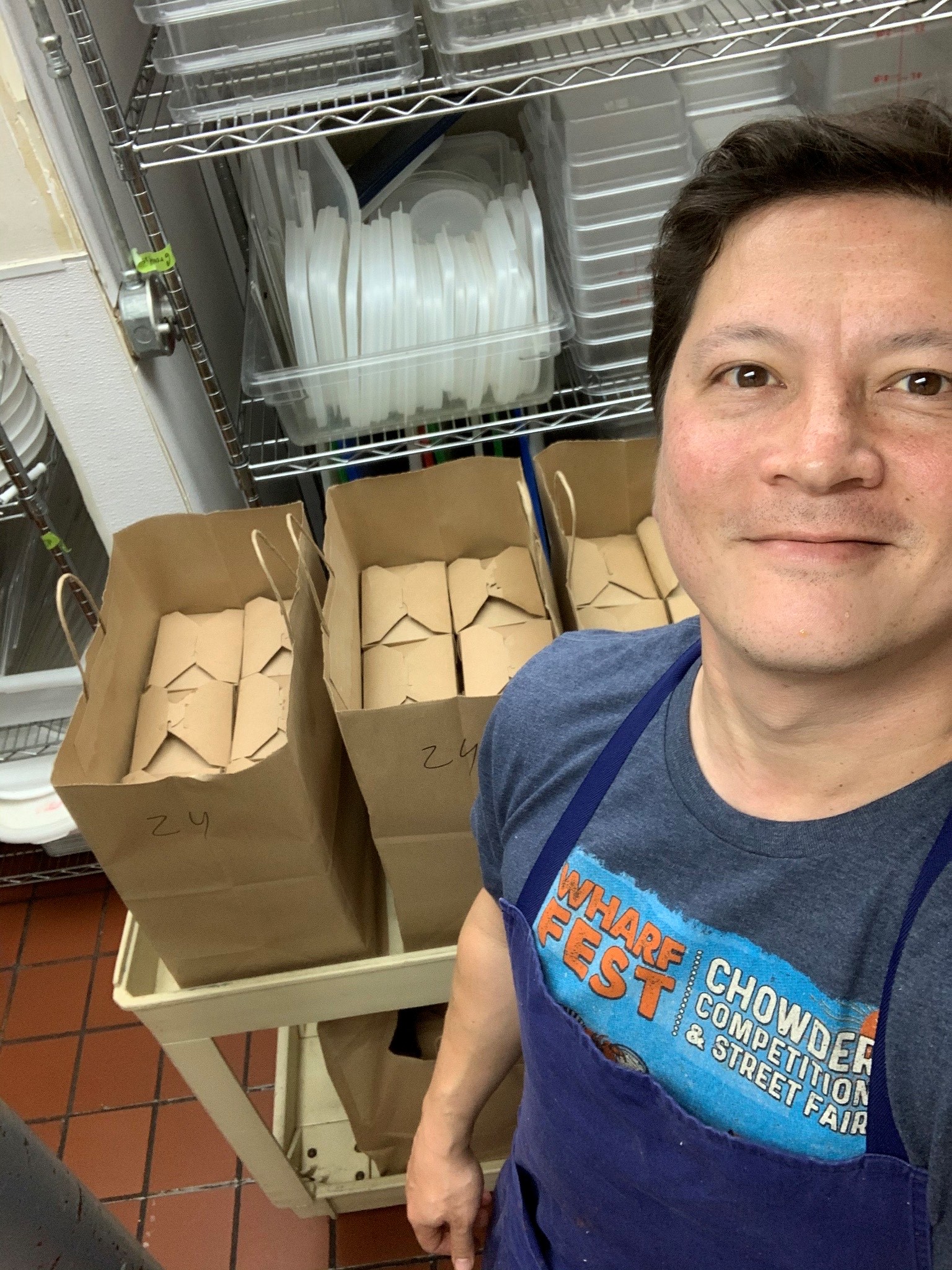 Lopez-Alt delivering meals with organization Off Their Plate. Source: Lopez-Alt

"It's tough because we went from being able to hire, employ and pay 40 people. Now we have like six [employees] and can hire a couple more, like four more," he says.

Lopez-Alt has also started collecting donations via a Patreon page, with all money received funding meals.

"We originally started on our takeout menus, where directly you can just buy a meal box for someone else for $10, and that goes straight into this program," he says, but Patreon allows for recurring donations and therefore some stability in funding. 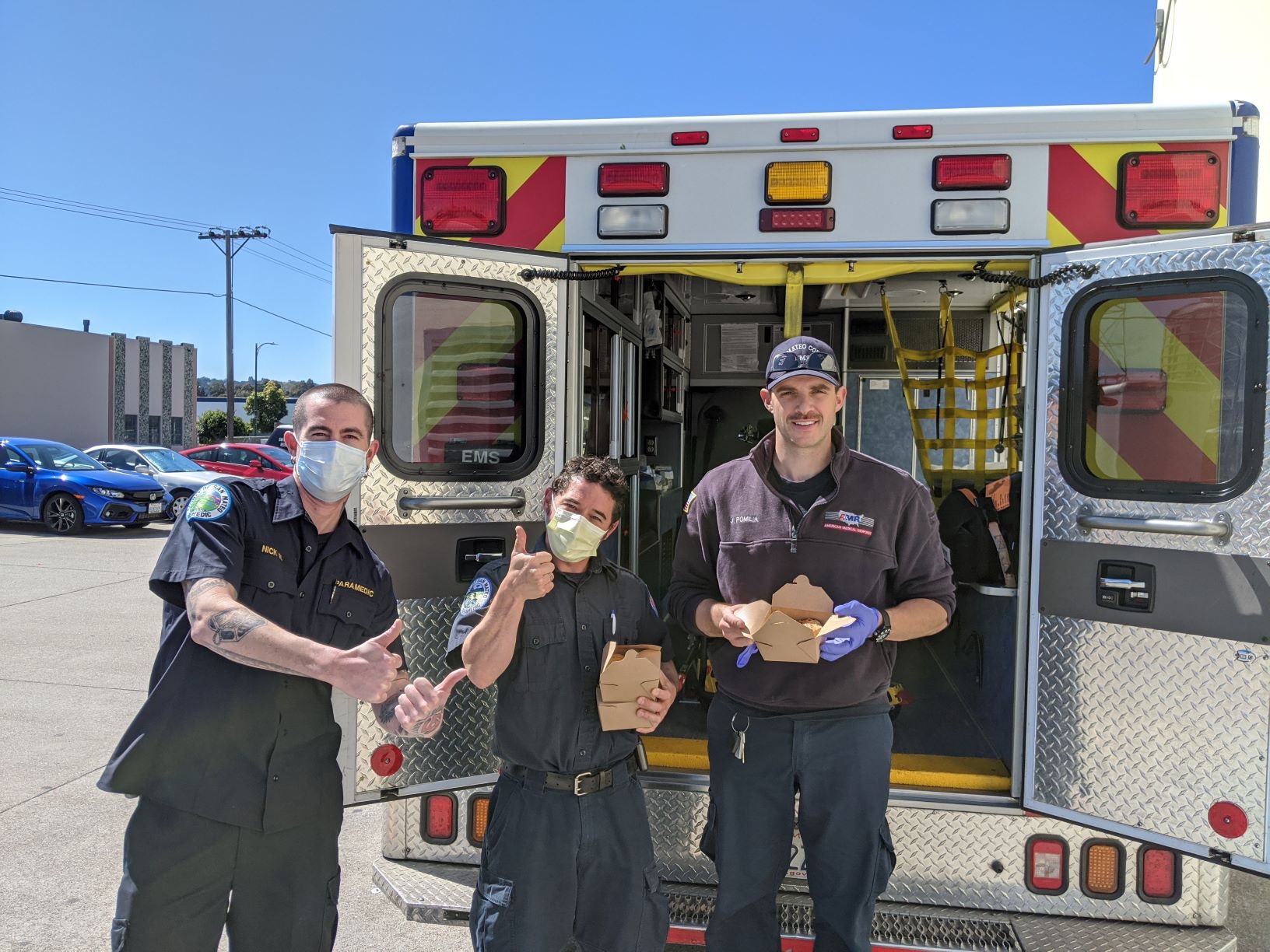 The hope is to have donated meals funding continue to increase, so he could hire back more of his employees.

"Ideally, I'd like to have another person every week, until we can't safely add anymore," Lopez-Alt said. "Every single restaurant owner, chef and small business owner that I know cares deeply about their employees and it's like their hands are tied."

Lopez-Alt and his partner at Wursthall have not taken any salary or profit during this time, he says.

"If I could make money appear so I could do this for [my employees], I would immediately. That's what I'm struggling to try to do. Right now, everybody is just trying to do the best they can."

Feeding the frontlines in NOLA

In New Orleans, which is emerging as a hot spot for Covid-19 in the U.S. with nearly 6,000 cases, restaurants were ordered to close on March 16, mandating takeout or delivery only.

Mia Devillier, co-owner of restaurants La Petite Grocery and Justine in New Orleans, closed her restaurants to the public and laid off or furloughed all her employees, save for six employees working at Justine who are now making meals for essential workers in the area.

"We shifted gears and started working with Krewe of Red Beans organization to feed the frontline in NOLA," she says. "We've maintained a small crew of mainly our salaried employees to keep them employed and keep the lights on." 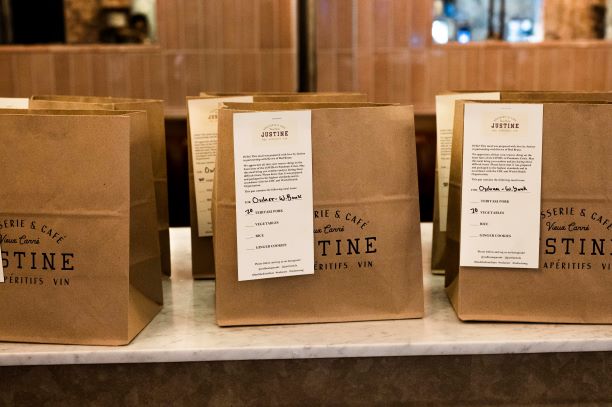 Meals from Justine ready to be delivered. Source: Katie Sikora

Krewe of Red Beans raised over $300,000 in donations to feed frontline workers in New Orleans, founder Devin De Wulf told CNBC Make It, and they order meals from places like Justine.

"My wife is an ER doctor, so we were able to start with her hospital, University Medical Center New Orleans," De Wulf said. "We started on March 17 with a $60 order of food and then we began fundraising. Fast forward three weeks later, on April 7, we have served our 20,000th meal."

The organization orders from 35 restaurants and spends $20,000 per day, De Wulf said.

"We have enough money to keep it going for a couple more days, but every single day we are fundraising," he said. "Our main goal is to save the local restaurants, because Mia [Devillier], for example, would be closed if we weren't ordering a bunch of food from her every day. And we've been doing that with all of the local amazing New Orleans restaurants."

Through Krewe of Red Beans, Devillier typically delivers about 200 meals a day, she said.

"It's been a wonderful partnership with Krewe of Red Beans – just the way we can give back to the community and really make an impact and feed all the people who are the real heroes in this situation," Devillier said. "I can't imagine what it's like to work in a New Orleans hospital right now. We are one of the epicenters of Covid-19 in the country." 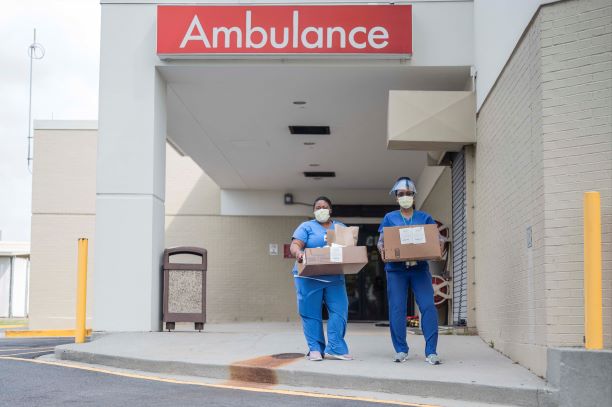 "The beauty of Krewe of Red Beans is they're also employing musicians that are out of work as the delivery drivers. So, it's a triple win," she said. "That's been very helpful for us. We wouldn't necessarily have the means to deliver all the meals every day."

Along with Krewe of Red Beans, Devillier has been working with the Nola Doc Project, which has raised $19,762 so far, according to its GoFundMe page.

"I made some of the first deliveries [for Nola Doc Project] and it was very eerie to be driving around New Orleans with very little traffic. You feel like you're in the Twilight zone."

"One I made outside an ER, the crew came out in masks," says Devillier. "To bring that boost or ray of sunshine to their day by delivering food to them was really something to experience."

Correction: This article has been revised with J. Kenji Lopez-Alt correcting his statement about those who are food insecure.