Lawmakers from both parties joined police reform talks Thursday as Congress tries to craft a bill that can get through a narrowly divided Capitol.

This Amazon Prime Day, It's Not About the Deals. How Other Retailers Are Looking to Win Your Business 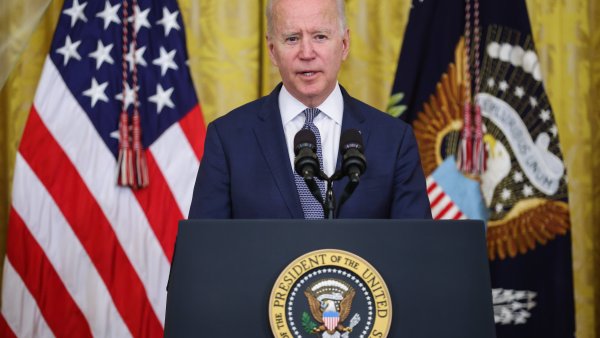 Biden's Top Tax Rate on Capital Gains, Dividends Would Be Among Highest in Developed World

Bass is the lead author of the George Floyd Justice in Policing Act, which the Democratic-held House passed last year and for a second time in March. Republicans oppose the bill, which has stalled in a Senate split 50-50 by party.

Scott led a Republican proposal that Democrats blocked last year in the Senate, at the time controlled by the GOP. As bills need 60 votes to overcome a filibuster, legislation has to garner at least some support from both parties in the chamber.

It is unclear what could win support from Democrats and Republicans, who have differing views on how far the federal government should go to root out violence against Black Americans and abuses of power in policing. Asked Thursday when the House may vote on a policing bill, Speaker Nancy Pelosi, D-Calif., said "we will bring it to the floor when we are ready."

"And we will be ready when we have good, strong bipartisan bill," she told reporters. "And that is up to the Senate and then we will have it in the House. Because it will be a different bill."

George Floyd, a Black man, died in May after former Minneapolis police officer Derek Chauvin knelt on his neck for about nine minutes. Chauvin was convicted on charges of second-degree murder, third-degree murder and second-degree manslaughter earlier this month.

Floyd's death, along with the police shooting of Breonna Taylor, a Black woman, in Louisville, Kentucky, last year, sparked the biggest outcries for racial justice and police reform in the U.S. in decades. During his first joint address to Congress on Wednesday night, President Joe Biden called on lawmakers to pass a policing bill by the first anniversary of Floyd's death next month.

"The country supports this reform and Congress should act," the president said. He has backed the House-passed legislation.

The bill approved by Democrats aims to ban chokeholds, carotid holds and no-knock warrants at the federal level, and would tie state and local police funding to those departments barring the practices. It seeks to weaken so-called qualified immunity, which shields officers from many civil lawsuits, and aims to make it easier to prosecute police.

In recent weeks, the senator has reportedly floated a compromise that would make departments rather than individual officers the subject of civil lawsuits.

Neither the Democratic nor Republican proposals would cut police funding. Activists and many progressive lawmakers have called since Floyd's death to redirect some money from law enforcement to social services.

Many major U.S. cities have either reformed policing practices or reduced funding for police in the last year.