James Ramirez, an L.A.-based freelance art director for movies and TV, designed an “I Voted” sticker to illustrate that our country is not as divided as it seems. To find and share a digital version of his sticker on social media, search "LXtion2020" on Giphy.

NBCLX teamed up with artists from across the country to design new “I Voted” stickers for the 2020 election. The latest artist to participate is James Ramirez, a freelance art director for TV, gaming and film projects, including the blockbuster, Oscar-winning movie “Spider-Man: Into the Spider-Verse.”

In a conversation with NBCLX storyteller Cody Broadway, Ramirez explained how he used overlapping type and blended colors to illustrate that our country is not simply divided along red and blue partisan lines – that there are many intersections between us.

“We're always going to have these very different views,” he said. “But I think there's this underlying factor that we're all humans. We're all in this together.”

You can find his art on Instagram at @friedpixels. To find and share his digital sticker and our entire collection of artist-created "I Voted" stickers, search “LXtion2020” on Giphy.

This interview has been condensed and edited for clarity. 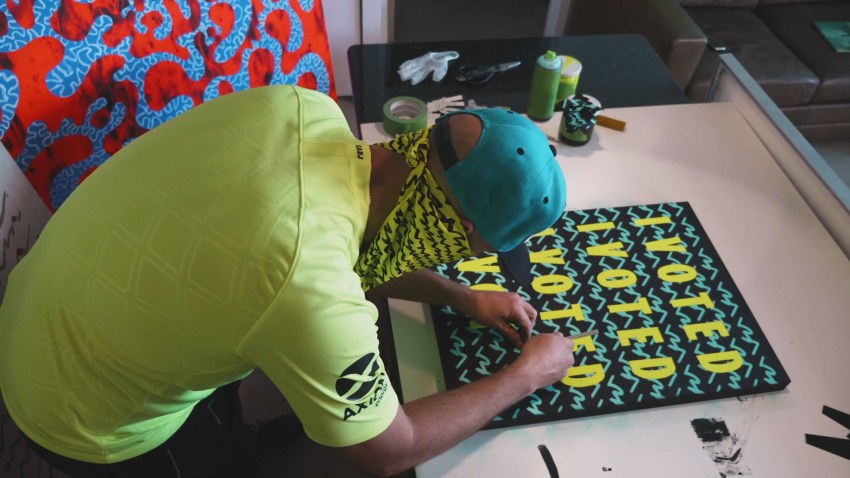 This Miami Artist and Immigrant Designed Us a New ‘I Voted' Sticker and Says the U.S. Is Still a ‘Shining Light'

Ramirez: Hi, I'm James Ramirez. I'm a freelance art director based in Los Angeles, California… I work on a broad range of projects in film and TV mostly, and also lately I've been doing some game trailer work as well. So I am usually brought into projects to work with teams and help see design through the full production. So designing, animating, compositing, helping concept out ideas and then helping all the way through the final production.

Broadway: What is it about the career that you enjoy?

Ramirez: I was always really curious and loved computers. And once I went to art school and realized that you could do computer stuff and art, that they could be one and the same thing... I just kind of immediately fell in love and started learning as much as I could on my own. And that has led me to kind of have really fruitful relationships and collaborations over the years through multiple studios and places... I never get bored, I'm doing a little bit of 2D, doing a little bit of 3D, doing some drawing, doing live action shoots. And it's always fun. It's always a mixture. And I can always kind of mix it up if I get bored. And it's led to some of the most fun, amazing projects that I never thought I would ever be on. It's always a journey.

Broadway: What are some of your clients?

Ramirez: I've worked with Sony Pictures... on the "Spider-Verse" main on end title sequence. I've worked with game developers. It's such a big, broad range of people. Like this year, it's been a lot of Disney Plus and Netflix and all [those] kinds of streaming services. But I've kind of worked with almost every major brand there is out there. Google, Apple, Beatz.

Broadway: Talk to me about what you're working on behind you.

Ramirez: So this is my contribution to the "I Voted" sticker… Sometimes it's such a polarizing idea, politics in our nation. But even for all the differences there are between us, there are these intersections. And so what I tried to do was symbolize that through the actual overlapping of the typography elements, so that they were creating these intersections and overlaps and blending of colors between each part of it so that it felt like it was a representative of our whole. And it's not that anyone needs to be completely red or completely blue, that there's all of this in between. And that we're kind of all in this together. So trying to distill all that down [to] a very clean, simple, graphic form. I focused on the color overlap, the actual overlap of the letters. But then also I used a halftone print texture throughout the design, which I felt represented how all of us come together to vote together. So it's like all these tiny little bits that are coming together to equal the greater sum.

Broadway: Walk me through the process of building it.

Ramirez: I do a lot of digital computer work. So I usually like to start with something very tangible. And sketching out ideas on paper can't be replaced…. So I always start on paper. And I didn't really have an idea of what I was going to do, but I knew that obviously letter forms are important to it. So I started with that and I did such a range, a wide range of things. Like I did some almost like tag letter forms and calligraphy-style lettering. And then I started playing with this blocky notion of typography. And then I brought out some colors and started seeing how the red and blue overlapped, creating kind of like a purple. And I figured that that was a good stepping stone to jump off of. And so through finding that idea, then I kind of scanned that in and brought it in the computer, played with it some more, and then was able to kind of land on a strong typographic foundation to work off of. And then brought that into Photoshop and played a lot with textural brushes and layering of each of the elements of the design.

Broadway: What do you want people to get out of your design?

Ramirez: I think the traditional “I Voted” sticker is great, right? This is something so classic design about it. Like, you can't really fuss with it. But what I wanted to do with my design was give it a unique voice… The uniformity of the "I Voted" stickers is great and kind of broadly applies. But I just wanted to give that side of the design element that, you know, somebody could be proud of to wear. And it felt like a fresh kind of unique voice on it rather than just the default, I guess.

Broadway: Why are you voting?

Ramirez: I'm voting because I want to contribute to the overall direction of our country. And I feel like there's a lot of important things that are on the table. And I want to help the country push forward in ways that are going to benefit us and not increase the divisiveness and kind of bickering amongst us. And I think that'll always be present because we're such a diverse nation, right? We're always going to have these very different views. But I think there's this underlying factor that we're all humans. We're all in this together. I think this kind of COVID time has really taught us that even amongst the darkest of moments, we've all unified together and realized that it's all on us to come together and do something… We're all in this country, so we need to figure it out together.