The candidate almost certain to join the 117th Congress is Republican Marjorie Taylor Greene from Georgia’s 14th District. The Democrat running against her dropped out of the race in September, virtually guaranteeing the victory to Greene.

Conspiracy theorists in Congress? It’s all but certain in 2020, and that has sparked concern among federal law enforcement.

At least two dozen candidates who’ve embraced QAnon made the ballot in Congressional races from New York to Florida, Georgia, and California, according to the liberal watchdog group Media Matters. The candidate who's gotten the most attention in that regard is Republican Marjorie Taylor Greefrom Georgia's 14th District.

Greene's Communication Director told NBCLX she no longer talks about QAnon, referencing an interview with Fox News Digital. "Never once in my campaign did I speak about QAnon or Q," Greene said. "I had read about a lot of things. I had posted, talked about, talked about on video, things that I had seen on Q. But really what made me change my mind is, as a person who's worked hard all my life, I chose a different path."

The Democrat running against her dropped out of the race in September, virtually guaranteeing the victory to Greene. The district, bordering Tennessee and Alabama, voted more than 2:1 for President Trump in 2016. 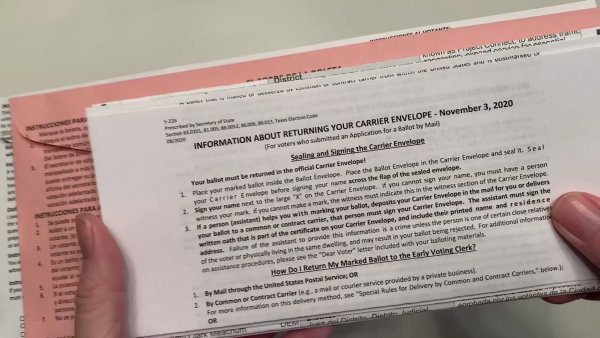 As Many Cast Votes by Mail, USPS Is Slowing Down

Data Privacy: What Could Happen to Your Personal Data Under a Trump or Biden Administration

Greene’s election to Congress is a BFD, because her past embrace of QAnon dates back to at least 2018. If you’re unfamiliar with QAnon, the conspiracy theory covers a broad range of wild claims about cannibalistic child sex rings run by former presidents and celebrities like Tom Hanks and Oprah Winfrey. NBCLX Storyteller Noah Pransky took a deep dive into what QAnon believes along with how to talk to someone who may believe the group’s outlandish tales.

QAnon’s ascension to the halls of Congress is a grave concern because the F.B.I. labeled the group a potential domestic terror threat in 2019.

Former President Barack Obama also recently expressed his fear of the group’s popularity on the podcast Pod Save America. “When you look at insane conspiracy theories like QAnon seeping into the mainstream of the Republican Party, what that tells you is that there are no more guardrails within that media ecosystem,” President Obama said. “How do we re- establish some baselines of truth?”

A Civiqs poll from September estimated that 13% of self-identified Republicans “support” QAnon and its outlandish beliefs.

The presumed elevation of Marjorie Taylor Greene to Congress followed another controversy which had nothing to do with conspiracy theories. The wealthy businesswoman lived in the North Atlanta suburbs, miles from Georgia’s 14th District, centered around Rome, Ga. In late 2019, Greene’s campaign manager told the Rome News-Tribune that she decided not to challenge a more established Republican candidate in her home district. Instead, “She’s been asked and encouraged by lots of supporters, both in the district and in the House Freedom Caucus,” Isaiah Wartman told the newspaper.

Greene’s move to GA 14 triggered initial backlash by local Republicans who expressed, “We like her as a candidate. We just like her in the district where she lives.” Still, Greene managed to defeat Dr. John Cowan, the well-known local neurosurgeon running against her in the Republican primary and subsequent run-off.

Prior to his run-off defeat, Dr. Cowan issued a public warning about her candidacy to the Georgia Recorder, “Marjorie Greene would embarrass the state, would cause problems for Republicans running in other districts, and she’s incapable of effectively representing the interests of northwest Georgia in Congress. People are beginning to take note and sound the alarm.”

NBCLX has a standing offer to Greene for an interview to discuss how her understanding of QAnon has evolved over time.

But in that same Fox News Digital interview, Greene explained what first drew her to the conspiracy theory. "The Russian collusion conspiracy theory," Greene recalled. "That was what was intriguing to me and led me to read a whole bunch of stuff like that, talk about it, post about it, and put videos out about it."

Exactly what happens once QAnon supporters are sworn in to Congress remains to be seen. Will they be ostracized, welcomed, or just ignored? One Republican strategist told New York magazine, “Anything [Marjorie Taylor Greene] sponsors will be DOA. Would you work with her on legislation? You don’t know what the hell she’s going to say. You can’t risk it.” Still, other Republicans may shrug off the QAnon association, and then it’s anyone’s guess what might unfold next.