Who would've thought a pair of multi-colored wool grandma mittens would steal the show at the presidential inaugural? But Bernie Sanders set the world ablaze Wednesday when he unleashed his winter mittens on an unsuspecting viewing audience... and social media JUST CAN'T GET ENOUGH! 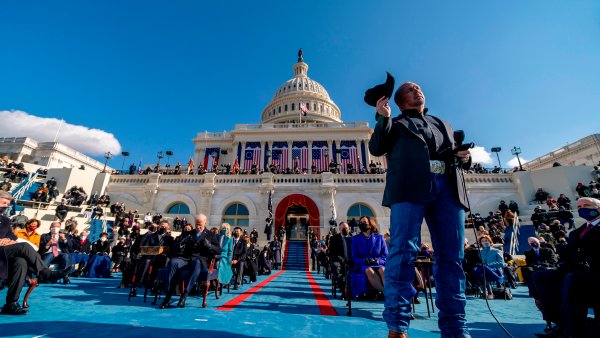 "Omg. This is the best one yet. But seriously, I’m ordering the mittens for the first two months of baseball season," wrote one social media user.

"It does not matter what the context is, if I see a Bernie Sanders mittens meme I will laugh and like the post no matter what," wrote another Twitter user.

And one more added, "We all need these mittens lol."

Here are a couple of things about Sanders' mittens that you may not know.

They're Good for the Environment

The mittens weren't just warm. They were made out of recycled materials.

They Were a Gift

The mittens were made by a Vermont elementary school teacher who has a side business making mittens out of recycled wool.

“I love it that he loves them, and that he wears them,” Jen Ellis, an elementary school teacher, told NECN-TV. “And I’m totally honored that he wore them.”

He's Worn Them Before

Sanders has donned the mittens before while running for president in 2020 and in interviews with Vermont journalists.

Move over crying Jordan meme, there's a new sheriff in town. Sanders’ inauguration look, including a brown winter jacket made by Burton snowboards, has spawned countless memes since Wednesday including the former presidential candidate on the subway, on the moon and sitting on the couch with the cast of “Friends”.