Federal and local inspectors have issued about 150 violations, warnings or citations against local businesses for illegally attempting to sell vaping devices to minors in the past year, according to a News4 I-Team investigation. Despite new laws, which raised the minimum age for purchasing electronic cigarettes and vaping devices, underage buyers are still attempting and succeeding in buying vape products locally.

A review of enforcement actions by the U.S. Food and Drug Administration shows more than 100 violations or warning letters in D.C., Virginia and parts of Maryland since the beginning of 2019. Prince George’s County and Howard County, both of which regularly conduct undercover inspections with a high school-aged “decoy” buyer, also report a series of local violations by store clerks in the past year.

“They will still sell. They will sell out the back door,” Prince George’s County tobacco enforcement officer Eric Turner said.

Vaccine Holdouts: How Some Departments Encourage First Responders to Get Vaccinated 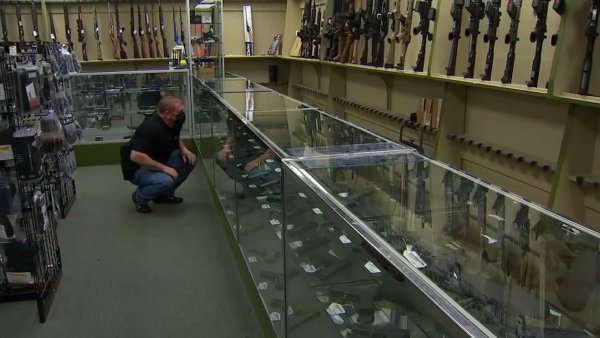 The Howard County Health Department has included e-cigarettes in its undercover compliance checks since 2017. The agency said newer laws have reduced some of the underage sales.

“Visits from the Health Department have made (stores) realize they need to be very vigilant on who they ID and who they sell to,” county investigator Glen Weir said.

The Loudoun County Sheriff’s Office recently announced several underage sales violations during an enforcement operation in late January. The agency said it checked 33 stores in the Ashburn area and issued summons against six of the businesses.

Maryland, Virginia and D.C. laws all require retailers to check licenses or IDs of vaping product customers. Maryland and D.C. laws specify the request must be made of any buyer who appears under the age of 30.

An I-Team undercover review of several D.C. vape and smoke shops found two businesses willing to sell to a young woman without requesting her identification. The woman, an NBC staffer, was working in conjunction with the I-Team on its review.

The D.C. Department of Behavioral Health said it’s in discussion to possibly include e-cigarettes in its compliance checks of stores. Currently, the agency is visiting retailers to remind them about the new laws increasing the buying age.

The FDA also has formal agreements with local and state agencies to conduct separate compliance checks of vape sales across the nation. The agency contracted with the Maryland Department of Health for inspections at businesses in Montgomery, Prince George’s, Anne Arundel and several other counties in the state. An I-Team review of the federally contracted inspections show an average of nearly 10 violations a month in 2019 in the D.C.-suburbs of Maryland.

Fairfax County mother Gail Embt knows firsthand the impact of vaping on teenagers. She found out last year one of her sons had an addiction.

“It was devastating to our family because of the lack of understanding, not knowing how to approach it,” she said. “There’s not enough manpower.”

Embt, of BreakTheVape.com, said while police and health agency inspections are needed, it will not stop underage sales or teens from getting their hands on e-cigarettes.

“I can tell you today of a store that is not in compliance,” she said. “I actually went and visited a vape shop, and while I was there, three pairs of teens, clearly under the age, came into the store.”

She said teens who are vaping share with their friends where to get products.

“If your child has his phone today, they have communication with other kids,” she said. “They can simply swipe and they can order something.”

Embt’s son is doing better, though he has relapsed before. She’s speaking to school groups about the risk of vaping products and developing a support network for families who go through what her family did.

The Fairfax County PTA has released resources for parents to review, if they are concerned about teens buying vaping products.

Reported by Scott MacFarlane, produced by Rick Yarborough, and shot by Steve Jones and Jeff Piper.