Here is where you can watch fireworks in the D.C. area

The D.C. area is ready to party this Fourth of July.

While 2020 did not offer many celebrations, the end of some COVID-19 restrictions has put the Fourth of July back on track.

Check out all the firework displays that can be enjoyed in D.C., Maryland and Virginia. 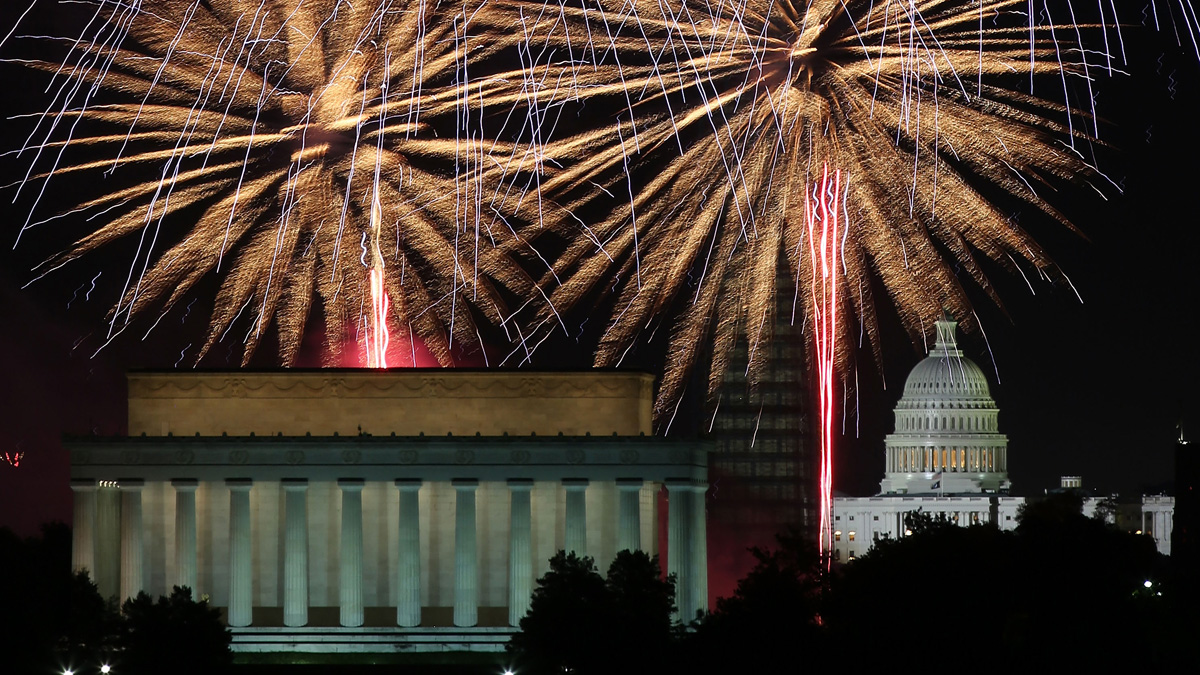 Everything to Know About July 4th Fireworks on the National Mall 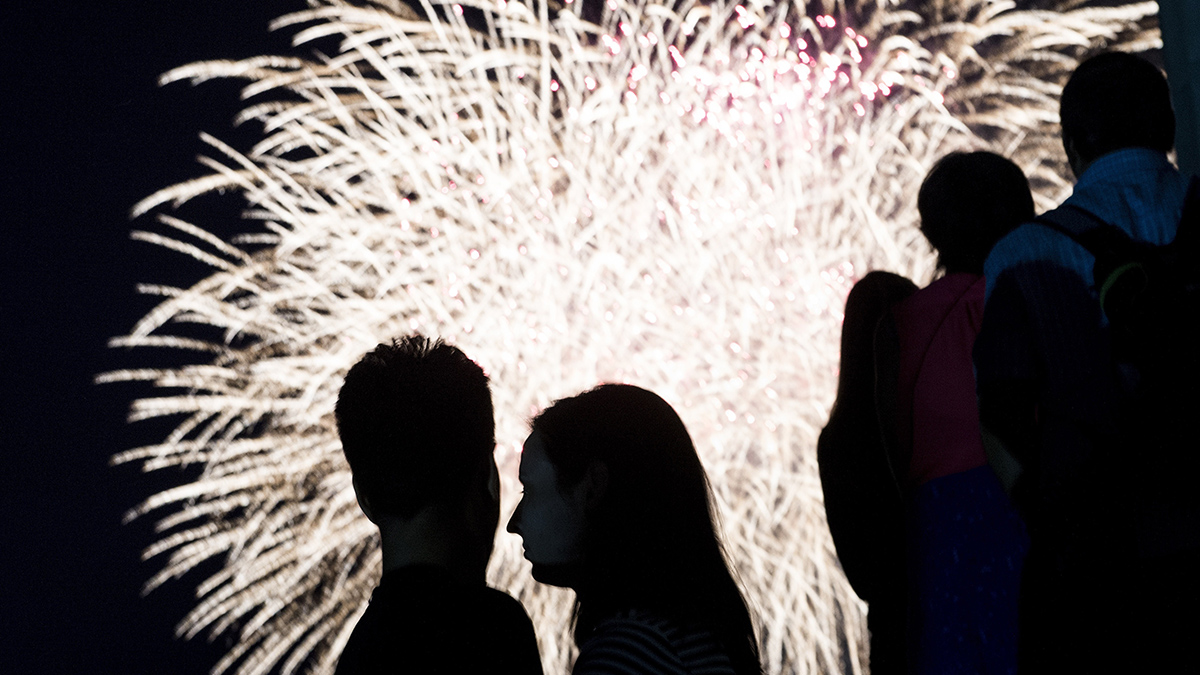 Fourth of July Parades, Events in the DC Area

July 4 Fireworks on the National Mall: The National Park Service announced on June 15 that the fireworks will be shown this year. According to the NPS announcement, the spectacle will begin at 9:09 p.m. and will last 17 minutes. The fireworks can be enjoyed from many locations in the city, including the National Mall and in Northern Virginia along the Potomac River.

You don't have to go downtown to enjoy the display. Some favorite neighborhood spots include the Washington National Cathedral lawn, Cardozo High School, The Yards Park, Giesboro Park and Anacostia Park. NBC Sports Washington has even more picks.

Annapolis: Although the city of Annapolis will have a series of Independence Day celebrations starting on Friday, July 2, the fireworks display will be on July 4. The fireworks will be launched from Annapolis Harbor at 9:15 p.m. and can be viewed from different locations. Some of the places to enjoy the show are northeast of the Severn River, City Dock, the Naval Academy Bridge – although parking is limited, street-end parks facing Spa Creek, or aboard a boat in the Annapolis Harbor.

Boonsboro: An option for those who want to celebrate Independence Day early is the fireworks display at Shafer Park on July 2. The fireworks will be launched after 9 p.m. If it rains, you can still catch the spectacle on July 3.

Frederick: The 99.9 WFRE station is having a Fourth of July concert, and while it has a cost, the firework show is free to watch from any of the parking lots opened to the public. Catch the show at different parking lots from The Frederick Fairgrounds (Lot A – E. Patrick Street across from Gate 1; Lot C – Highland Street; Lot E – Highland Street; Infield Lot – Accessed via Gate 3.)

Garrett County: On July 4, there will be a fireworks display launched above the Marsh Mountain overlooking Deep Creek Lake. The Fire on the Mountain Fireworks Display can be viewed from different locations: the scenic overlook along Rt. 219, Wisp Resort, the lawn at Garrett College, aboard a boat on Deep Creek Lake, particularly on McHenry Cove or at local businesses in McHenry. The rain date for this event is Monday, July 5.

Hagerstown: The 30-minute show will begin at 9:30 p.m. on Fairgrounds Park on July 4. Because of COVID-19, there will no food vendors or other types of amenities. Visitors should bring blankets and chairs to sit on the park grounds, and they are permitted to bring food.

Howard County: The fireworks start at 9:20 p.m. on July 4 at the Lake Kittamaqundi in Columbia and will last 20 minutes. Spectators can arrive at the park starting at 3 p.m. and lay blankets on the grass. Visitors should know that Little Patuxent Parkway will close at 7 p.m. The event will also offer entertainment and food trucks.

La Plata: The gates of the Charles County Fairgrounds will open at 3 p.m. on July 4 for visitors to enjoy an afternoon of activities, followed by a fireworks spectacle. The display will be after dark and will be accompanied by music from The Port Tobacco Pickers and The Bucket List.

Ocean City: Ocean City will provide two different locations from where to watch fireworks on July 4. Starting at 9:30 p.m., people can enjoy Independence Day celebrations downtown on the beach at N. Division Street or Uptown on Northside Park.

Williamsport: Williamsport also offers an early celebration. The fireworks will be launched in the Byron Memorial Park on July 2, with a second rain day option on July 3. The show will begin after a concert that starts at 6 p.m.

Colonial Williamsburg: The free event will display fireworks for 20 minutes starting at 9:20 p.m. on top of the Governor’s Palace. People can enjoy the spectacle from different locations including Palace Green and the lawn of the Arts Museum.

Culpeper: After a day filled with activities, like a 5K race and a Patriotic Presentation at Yowell Meadow Park, people can enjoy the town’s firework display launched from the Rock Water Park at 9:15 p.m. on July 4. People will not be allowed to enter the park after 5 p.m.

Fairfax: The Independence Day Celebration fireworks will be launched at Fairfax High School on July 4. Although there are no activities for kids, there will be entertainment starting at 6:30 p.m.— just before the fireworks.

Great Falls: The gates of the Turner Farm Park will open at 6 p.m. Visitors can enjoy music, games, and food while they wait for the main event.

Herndon: A socially distanced firework spectacle will be shown from the Herndon Centennial Golf Course at 9:30 p.m. on July 4. People interested should bring blankets and chairs to Bready Park which will open at 8 p.m. Food concessions, entertainment, or bringing your own alcohol or grills are not permitted.

Lorton: For those who cannot go out on Independence Day, Workhouse Arts Center will have a firework display on July 2. People interested must buy tickets that range from $40 to $110 with different perks. The fireworks will be launched during the dark, but the event will be from 6 p.m. to 10 p.m.

Manassas: The city of Manassas will also have a day of fun on July 4, starting at 3:30 p.m. before the fireworks display at 9:15 p.m. People interested in watching the show are encouraged to pick a spot in the Manassas Museum Lawn.

Purcellville: Loudoun County’s fireworks will take place at Franklin Park about 9:15 p.m., but get there early because there’s no guaranteed entry after 8:30 p.m. Alongside the display you can find music and food vendors.