The comedian took aim at many politicians and journalists, but also addressed the dinner with a more serious tone to focus on the importance of the freedom of the press in America

Comedian Trevor Noah took aim at lawmakers on both sides of the aisle and praised the important role played by journalists as he marked the return of the White House Correspondents’ Association (WHCA) dinner on Saturday, April 30 in Washington D.C.

Noah kicked off his speech with mocking Washington’s elite for hosting an indoor gathering just a few weeks after multiple members of the Biden administration, including members of Congress contracted COVID-19 following the Gridiron Dinner, which is another formal Washington event.

With Pete Davidson and Kim Kardashian among the multiple famous faces in the room, "The Daily Show" host opened his remarks at the dinner by saying, “It is my great honor to be speaking at the nation’s most distinguished superspreader event."

“For real, what are we doing here? Did none of you learn anything from the Gridiron dinner? Nothing?” Noah said.

He continued, “I expect this from Sean Hannity, but the rest of you, what are you doing?” Noah asked. “You spent the last two years telling everyone the importance of wearing masks and avoiding large indoor gatherings. Then the second someone offers you a free dinner, you turn into Joe Rogan."

Noah noted that many should have known something was wrong when Dr. Anthony Fauci “thought it was too dangerous” to attend the event while “Pete Davidson thinks it’s OK.”

The last time a president and comedian shared the same stage at the White House Correspondents' Dinner was six years ago in 2016 with then host Larry Wilmore ending his set with a goodbye to Barack Obama. Donald Trump shunned the event while in office, and the WHCA dinner was sidelined by the pandemic in 2020 and 2021.

“Thank you for having me here,” Noah said to President Joe Biden during his speech. “And I was a little confused on why me, but then I was told that you get your highest approval ratings when a biracial African guy is standing next to you.”

“People have been so hard on you, which I don’t get,” Noah said to Biden, before continuing with an inflation-related punchline: “Ever since you’ve come into office, things are really looking up: Gas is up, rent is up, food is up. Everything...”

Noah joked, "The real reason that it’s such an honor to be here tonight is that we all get to be in the same room as the most powerful man in the United States. So let’s give it up for Joe Manchin, everybody," referencing the troubles Democrats faced in Congress and needing Sen. Manchin's vote.

Noah mentioned how Florida Governor Ron DeSantis was attending the event and discussed his attempts to promote skepticism in vaccines and the signing of the state’s “Don’t Say Gay” bill, which restricts how LGBTQ+ issues are discussed in classrooms.

“Ron won’t even tell people if he got the booster, or as they say in Florida, ‘Don’t ask, don’t tell,’” Noah said, in reference to the now repealed ban on gay people serving openly in the military. 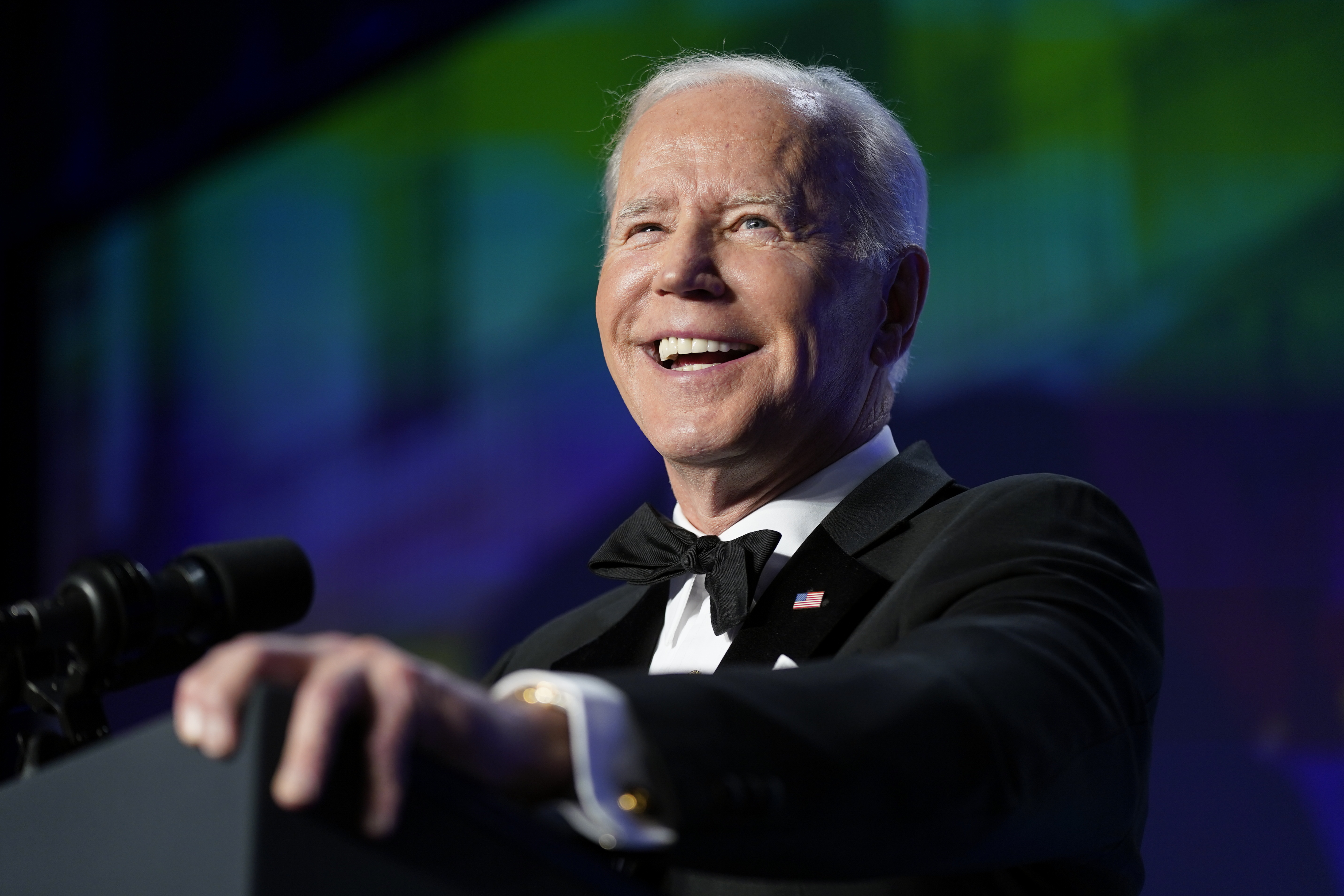 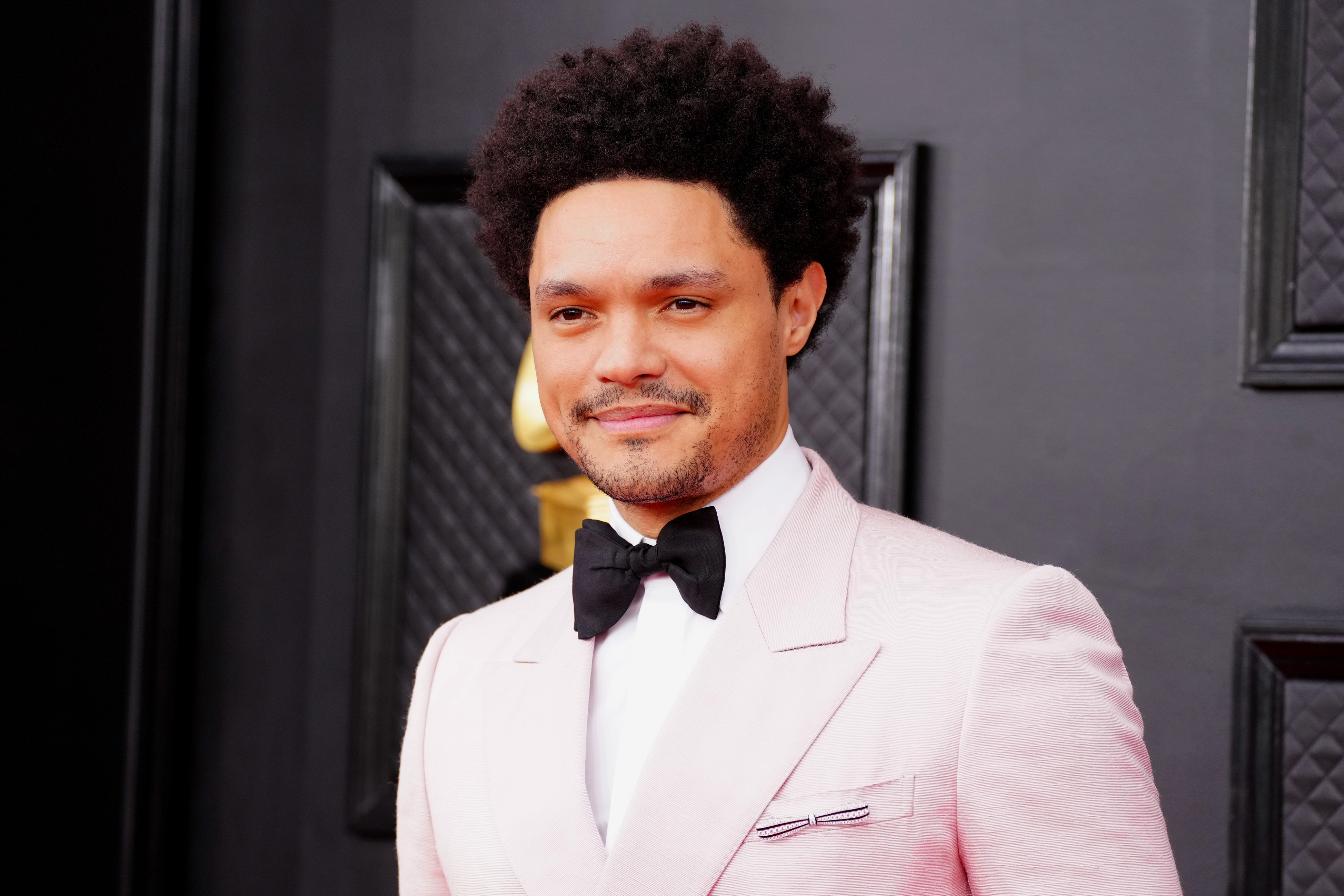 The comedian quipped about the infamous Chris Rock and Will Smith slap that occurred during the 94th Academy Awards.

"We all saw what happened at the Oscars. I’ve actually been a bit worried about tonight. I’m not going to lie. What if I make a really mean joke about Kellyanne Conway, and her husband rushes up on the stage and thanks me?"

The network CNN was hit with several digs by the comedian, starting with the host telling dinner attendees to get comfortable and relax. But "not 'too' comfortable, Jeffrey Toobin," who apologized after being caught exposing himself while on a Zoom call.

"Where is Jeffrey Zucker?" Noah asked of CNN's former president, who resigned from the company in February.

"'Jeff got fired off because he tried to keep his workplace relationship secret, which is weird, because if he really didn't want anyone to know about him, he could have just made a show about it on CNN Plus!" citing how the streaming service was shut down after one month.

By the end of Noah's speech, he used his time to challenge the journalists and other media attendees in the room to use their American freedom for good. He also noted how journalists in Ukraine were risking their lives to report on the war.

“In America, you have the right to seek the truth and speak the truth, even if it makes people in power uncomfortable,” Noah said. “Even if it makes viewers or readers uncomfortable. You understand how amazing that is? I stood here tonight and I made fun of the president of the United States and I’m going to be fine.”

Turning to Biden, he asked, “I’m going to be fine, right?”